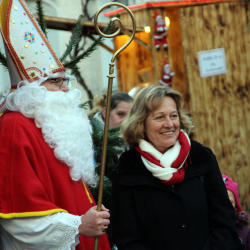 A man has been banned from wearing the St. Nicholas costume in the German town of Mühldorf because he agreed with the sentiment that child marriage is the same as child abuse.

How in the world could anyone object to that opinion? Well, it happened that it was originally expressed by the German Identity movement. Agreeing with anything the Identitaires say makes you a Nazi, if you live in Modern Multicultural Germany.

Many thanks to Nash Montana for translating this article from Wochenblatt:

St. Nicholas affair in Mühldorf: A wrong like? Shared the wrong post? A wrong commentary? The wrong consequence?

Things are all wrong in the city on the River Inn in this pre-Christmas time. The man who has for almost thirty years been the embodiment of St. Nicholas at the Christmas market in the city liked and shared and commented on Facebook about something. As a consequence of his internet activity, the mayor has ripped the St. Nicholas wand from his hands.

Preceding this all was a campaign by the Identity Movement (IB) in Mühldorf on the Inn. In front of city and ecclesiastical kindergartens they hung posters with the words “child marriage = child abuse” and the sentence “the Maas is full” [Word play on Maas/Mass, “das mass ist voll” = it is enough]. On their Facebook site the IB then presented pictures of the campaign. Mühldorf’s “St. Nicholas Institution” Peter Mück liked the statement on Facebook, and expressed his approval with the words “Well done, boys”. And he shared the IB post.

His Facebook activity wasn’t undetected for very long. “There were parents of the angels who are accompanying St. Nicholas who expressed their concerns to me in calls,” says Mayor Marianne Zollner, as she recounts the events as they happened. She invited Peter Mück for a discussion on Monday morning, November 14th, which took place. Until now, all statements made by the mayor and St. Nicholas seem to be in agreement. But concerning the content of said conversation, perceptions are far apart.

This is what Mayor Marianne Zollner said

“The Identity Movement has with their action abused our buildings for their own purpose. That is why the city of Mühldorf has already filed a report with the police. In the conversation with Peter Mück the topic was mainly about what kind of relationship he has to the movement and where he stands. He did not disclose that. And since he did not declare himself to be ready to distance himself in any way shape or form from the IB, he left me no other choice. Everybody can of course utter their opinion, but one has to live with the consequences too. A St. Nicholas that apparently engages himself in favor of such a misanthropic and xenophobic movement cannot be justified by me as the mayor of the city of Mühldorf. This is a decision that was very difficult for me, and personally I am very sorry.” Still, the door would be left open for Peter Mück: Should he distance himself openly and clearly from IB on Facebook, then he could carry on wearing the garb of the Mühldorf St. Nicholas.

And this is how Peter Mück experienced the conversation

“The only thing that mattered to me was the statement ‘child marriage = child abuse’, behind which I fully and completely stand even today. This is what I told Marianne Zollner as well, after which she stared at me bug-eyed. In our conversation she never once asked me what my stand is in regards to the IB movement; she didn’t ask me if I were a member or whether I sympathize. All she wanted was for me to distance myself from the statement that child marriage equals child abuse. Which I did not do. To which the mayor then said: ‘Well then we’ll have to find another Nicholas.’ In our conversation I tried to explain to her that I am neither xenophobic nor would I abuse the St. Nicholas garb for any kind of political statement, but it didn’t help.”

Is there a chance left?

“Even my father, in 1958, wore the holy garb at the St. Nicholas Kindergarten. And for two decades he was the St. Nicholas at the Christmas market in the city. And my mother, too, had worn the Nicholas robes. Both were very engaged at the Advent singing, too. And I, too, at the moment when I put on the garb, am fully and completely St. Nicholas and no one or nothing else. We just are a Christmas family,” Peter says. To this day he cannot believe all that happened on that Monday. “I just liked the campaign on Facebook, I shared it and commented and I really think that when it comes to child marriage and child abuse, there are no two truths.” At this point that categorically excludes a return as St. Nicholas at the city’s Christmas market: “This is not even a topic anymore. After I have been basically partially prejudged, I do not see a chance for this anymore. I’m not talking about me. I just don’t want any of the little angels and other kids who walk with me, to experience how while I hand out sweets and candy at the Christmas market, someone will call after me: “Look there’s the Nazi Nicholas!”

42 thoughts on “If You Believe Child Marriage is Child Abuse, Mühldorf Says You’re a Nazi”