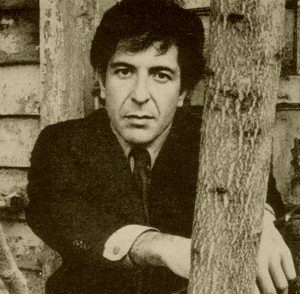 For decades I have been in the habit of listing our three greatest living lyricists. Well, it seems I must now collapse that list to two. Or find some new name to add to it.

Leonard Cohen died today at the age of 82. He joins the ranks of the immortals not for his tunes, but for his lyrics, which were always superb.

I’ve quoted from his songs here a number of times in the past (notably from “Dress Rehearsal Rag”). His greatest work was “Hallelujah”, but that is well-known to most people. So, in honor of his passing, I’ll paste the complete lyrics from one of his lesser-known songs, “Story of Isaac” from the 1969 album Songs From a Room:

Story of Isaac
by Leonard Cohen

The door it opened slowly,
My father he came in,
I was nine years old.
And he stood so tall above me,
His blue eyes they were shining
And his voice was very cold.
He said, “I’ve had a vision
And you know I’m strong and holy,
I must do what I’ve been told.”
So he started up the mountain,
I was running, he was walking,
And his axe was made of gold.

Well, the trees they got much smaller,
The lake a lady’s mirror,
We stopped to drink some wine.
Then he threw the bottle over.
Broke a minute later
And he put his hand on mine.
Thought I saw an eagle
But it might have been a vulture,
I never could decide.
Then my father built an altar,
He looked once behind his shoulder,
He knew I would not hide.

You who build these altars now
To sacrifice these children,
You must not do it anymore.
A scheme is not a vision
And you never have been tempted
By a demon or a god.
You who stand above them now,
Your hatchets blunt and bloody,
You were not there before,
When I lay upon a mountain
And my father’s hand was trembling
With the beauty of the word.

For a somewhat different poetic riff on Abraham and Isaac, see “Parable of the Old Man and the Young” by Wilfred Owen.

11 thoughts on “He’s Standing Before the Lord of Song”