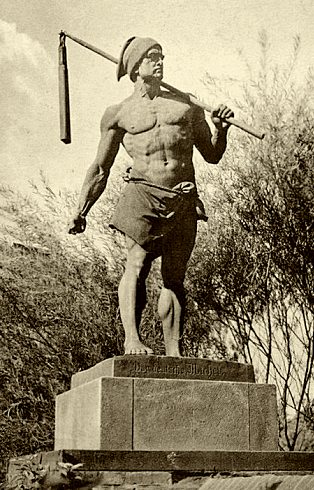 The events described at the beginning of the following op-ed made my blood boil: German Christian leaders, both Catholic and Protestant, took off their crosses when visiting the Dome of the Rock in Jerusalem.

There’s much more about the current dhimmitude of the elites, both in Germany and throughout the West, in this essay. But there is also a reminder (and a warning) about the larger meaning of the populist surge, as exemplified most recently by the election of Donald Trump.

Many thanks to JLH for translating the latest piece by Hans Heckel published in the Preußische Allgemeine Zeitung:

The Martin in the Michel[1]

Why Anne Will should have waited for the bishop to send a signal, and why Luther still constitutes a warning to the powerful.

With the appearance of a woman in a niqab, Anne Will bought herself some trouble. Wrapped in the black garment of radical Muslimas, with only a slit for the eyes, the Swiss convert was free to beat the drum for jihad and make assassins into victims. That was too much — not just for Henryk M. Broder, who writes that he will never again pay the broadcast tax, basta!

Poor Anne Will. It was provably just too soon for such a show. If she had waited a year or two… who knows? Maybe by then, we’ll be culture-sensitive enough to accept the black spook-robe as an enrichment, and will have discarded all those things which a Muslim could perceive as an insult, such as Christmas fairs, pork or improperly dressed women.

Or crosses. During their visit to Jerusalem’s Dome of the Rock, the highest representatives of the great German churches set a new mark for the repression of the Christian symbol. The chair of the Catholic German bishops conference Cardinal Reinhard Marx and the chair of the Council of the Evangelical [Protestant] Church in Germany, Bavaria’s regional bishop Heinrich Bedford-Strohm, took off their crosses there because a Muslim dignitary, and allegedly also a Jewish dignitary, requested it.

Bedford-Strohm hastened to assure that this was an exception. So be it! What is decisive is that Muslim clerics, among others, can decide whether and where bishops may wear their crosses. From the Dome of the Rock, a cross-free zone can spread out bit by bit. Did Mohammed not decree that the whole world belongs to Allah and only Allah? And don’t thousands upon thousands of Islamic preachers proclaim that worldwide every day?

Oh, well, they don’t mean it like that. Oriental blood boils over easily and afterwards, it’s not all that intense… or is it? We can remember a certain Turkish politician who once proclaimed that democracy is just a train that you jump on, to ride to power. Connoisseurs of the religion said, that’s just a saying, and praised the man as the leader of the “moderate Islamic party, AKP.” In other words, sort of a Christian Democrat, Mohammedan-style. Then Erdogan rode the train into the station and now he is demolishing said train.

The German church functionaries discarding their crosses must have had a phenomenal effect on the persecuted Christians in Syria and Iraq and elsewhere. Some of them may begin to believe their relatives who have fled to Germany, who are reporting that the Christian persecution they wanted to escape continues full-strength in the German asylum camps.

Anyone who complains too loudly about this scandal should be on guard. Against whom? Islamic fanatics? No, against Heinrich Bedford-Strohm. Because anyone who warns that the persecution of Christians may be spreading to Germany is stirring up fears “instead of overcoming them.” And that is a sign of a “right populist,” which we must face with a “clear statement,” as the Evangelical Church leader cleverly commented in connection with the discussion of his Dome of the Rock visit sans cross.

With virtuosity, he swirled the concepts “ethnic” “right extremist’ and “right populist” together in his philippic to create the impression that they are all the same. There are “gestalts” at work, he maintains, that are “rabble-rousing against others under the cover of freedom of expression.” “An anti-Islamic culture war is being staged” by those villains. At this point, even the most hopeless and desperate Christians in the Near East may re-discover their ability to laugh.

Millions of Christians there are being persecuted, expelled, often massacred in the most horrific ways — and yet the head of German Lutherans is losing sleep because of an “anti-Islamic culture war” in the debating circles of the federal republic. What would Martin Luther have had to say about that? That’s what is most annoying about the great figures of history — they’re all dead. How entertaining it would be if the Reformer, in the year before the 500th anniversary of his dropping the hammer, could take a quick look at the activities of his custodians. Not even in a mosque would poor Bedford-Strohm be safe from the fury of the his church’s edgy founder.

Luther’s well-known method was to hearken to the people’s tongue, while today’s servants of the church would rather drive over it. Which explains their revulsion at “populists” who are expressing what the mob in town and country are saying. In the past, the babbling was of no interest to them. But since the “populists” have been laying booby-traps in their usual discussions, it has been necessary to waste time with objections from “below.”

In the course of things, it seemed certain that the “people” had been successfully done away with long ago. About fifty years ago the trail-blazers of the present ruling elite in politics, religion, education, media and so forth had set out to challenge the elites of that time. They saw themselves as unusually emancipatory and revolutionary and considered themselves as “advocates of the oppressed,” a.k.a. the people, as was the leftist custom then to call them. Today, the successors of the emancipators and folk-liberators of that time are themselves in power, which accounts for their opinion that the “folk” is no longer needed. Unfortunately, this folk is still here and has begin to notice that it has been dispossessed. Its reaction was first mistrust, then annoyance, then finally the rage of the “Wutbürger”.[2]

So the rabble has to be kept under control. History has proven how that is done best. The most successful tactic for holding power is inculcating the masses with a sense of guilt. A person who feels guilty will obey. Since that works especially well in the case of the Germans, the guilt tactic is especially favored by their power-holders.

The US voting locations had barely closed, when the media was beating us up about who was most responsible for the rise of the horrifying Trump. It was our transatlantic relatives, the German-Americans! Support for the demon of the moment is not as strong in any other immigrant group as in the descendants of the Müllers, Meyers and Schulzes who once crossed the ocean.

Here we go again. The Germans, of all people, are most at fault, should be ashamed and especially should realize that they ought to leave the business of politics to wise leadership, instead of allowing themselves to have their own “populist” opinions.

But it pays to be cautious. It may be that Germans are especially susceptible to being led around by the nose-ring of guilt. But we should not forget it was also a German, 500 years ago, who put a stop to that particular guilt business and destroyed the selling of indulgences. And the entire western world quaked as a result. So, best not overdo it, or a raging Martin may come shooting out of the good Michel.

7 thoughts on “Dhimmis, Demagogues, and Luther”