This essay was published originally in the New English Review, September, 2016.

As many of our readers know, Gates of Vienna finds Emmet Scott’s research into the history of Islam’s darker corners, largely unexamined by Western scholars, to be a sorely-needed remedy for the current obfuscation of authentic Islamic history. Thus, faux-“movements” such as #BlackLivesMatter, funded by Soros or those like him, sadly cheat African Americans of the full story regarding Islam’s brutal treatment of Africans. Just like the slavery that preceded it, BLM cheats people of a reality based on factual information, trading it for the easy answer of deep resentment fueled by misinformation.

Emmet Scott’s essay appears here in its entirety, including his choice of image. 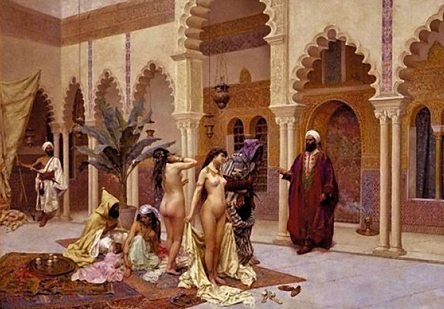 In The Impact of Islam (2014) I showed that whilst slavery as an institution had been abolished in Christian Europe by the tenth century, it was revived in later centuries first and foremost by contact with the Islamic world. As might be expected, it was that region of Europe in nearest proximity to the Dar al-Islam, namely the Iberian Peninsula, that first adopted the Islamic custom of slave-raiding and slave-keeping. In the Iberian Peninsula Christendom had shared a land border with Islam for many centuries, and it was precisely there that Christian kings and princes, from the eleventh century onwards, began to adopt such characteristically Islamic customs as polygamy, the keeping of harems, and the guarding of those harems with slave eunuchs.

By the late fourteenth century Portuguese and Spanish sailors had begun exploring the coasts of West Africa, with a view to finding a route to the Indies by circumnavigating the continent. This was known to be possible because just such an expedition, described in the pages of Herodotus, had been accomplished during the reign of the Egyptian pharaoh Necho. A direct route to the Indies would open up the possibility of a lucrative trade in spices without the need to traverse the Muslim lands of the Middle East.

By the middle of the fifteenth century Portuguese caravels had pushed south of the Saharan coast and established a trading post at Arguin in modern Mauretania. Slaves were among the first commodities purchased by the Europeans, but it should be remembered that the latter were only now participating in a commerce that had been pursued by the Arabs of North Africa for centuries. Indeed, throughout the Middle Ages Christian Spaniards and Portuguese had become familiar with the sight of black slaves in the possession of the Muslim inhabitants of Andalusia (Islamic southern Spain) and Morocco, and there is absolutely no question that in procuring African slaves the Christians were merely imitating the example of their Muslim neighbours. This is not to make excuses for the Christians, but it is something that needs to be said, for it is a fact that is routinely ignored in academic and popular publications.

Many of the slaves obtained by the Portuguese were taken to Madeira, where they worked in sugar-cane plantations. Others, however, and this is a fact usually hidden from readers, were sold in Morocco and Algeria. The Spanish and Portuguese merchants quickly discovered that a very handsome profit could be made in selling black slaves to the Muslims, for the sea-route was far speedier and therefore cheaper than the trans-Saharan routes by which the slaves had hitherto been conveyed north.

After the discovery of the Americas in the late fifteenth century the African slave trade became extremely important for Europeans, with the English, Dutch and French joining the Portuguese and Spaniards in transporting many thousands of Africans across the ocean every year. Altogether, an estimated 12.3 million Africans were shipped across the Atlantic in the four and a half centuries between the end of the fifteenth century and the middle of the nineteenth. Of these, about 10.4 million survived the crossing and were put to work mainly in plantations, though some were also employed in mines and factories. African slaves were usually permitted to marry and their descendants now form an important element in the populations of North, South and Central America.

European slavers preferred young males who were best suited to heavy work in the fields, and in this regard European slave-trading was very different from its Muslim counterpart. Although the Muslims also traded in healthy young males, who were often put to work in mines and on ships as galley-slaves, the great majority of Africans taken by the Muslims were young women and girls as well as young boys. The women and girls were destined for the harems either as concubines (sex slaves essentially) or as harem attendants, whilst the young boys were normally made into eunuchs and expected to perform the various functions expected of this class of person. The “operation” by which youths were made into eunuchs was barbarous in the extreme and it is estimated that at least 60% of the victims died of blood loss or shock.

The Islamic world began taking slaves from Africa shortly after Islam’s founding, in the seventh century, and slaves continued to be procured there until the second half of the twentieth century. It was still perfectly legal to buy another human being in Saudi Arabia until 1963, when slavery was abolished (officially at least) after intense Western pressure. It is of course impossible to say precisely how many Africans were enslaved by Muslims during these centuries, since few accurate records are available, and those that are only cover short periods and specific areas. There were several major routes by which slaves were conducted north from the African interior: One ran north from the Niger region across the Sahara to Marrakesh; another ran through the middle of the Sahara to modern Algeria and Tunisia; yet another ran from the southern Sudan region up the Nile Valley towards Egypt; and one more ran from the Great Lakes region of central Africa north through Somalia towards Arabia. A final and extremely important slaving route ran from the coastal regions of East Africa and centered on the port of Zanzibar. From here thousands of slaves were shipped north towards Arabia and Turkey.

Estimates of the numbers involved in this traffic vary wildly; the most conservative being around 10 million and the highest around 100 million. The truth is probably somewhere in between. However, irrespective of the precise numbers, one fact is striking, and strikingly in contrast with the situation in the Americas: The millions of Africans brought into the Islamic Middle East and North Africa since the seventh century left almost no genetic trace in the present-day populations of those regions. In the case of male slaves this is easily explained: virtually no African male was permitted to reproduce. The majority of such slaves taken were young boys and these were invariably castrated. The adult males who did not suffer this fate were consigned to a life of perpetual backbreaking labour as galley slaves or miners, without the comfort of female company. The situation with female slaves however was very different: virtually all of these were employed as house-maids and concubines, and the great majority would at some stage have had children, or at least become pregnant. What happened to these children is one of the darkest secrets of Islamic history. Taking everything into account, there can be no doubt that great numbers of them were killed by their fathers, since no other explanation is forthcoming. It is a curious fact that a topic as explosive as this has been very sparsely investigated by academics and journalists, though the following excerpt from the New York Daily Times of 1856 shows it to be a subject periodically noted by Western observers over the centuries. “In Constantinople it is evident that there is a very large number of negresses living and having habitual intercourse with their Turkish masters – yet it is a rare thing to see a mulatto [someone of mixed Negro-Caucasian race]. What becomes of the progeny of such intercourse? I have no hesitation in saying that it is got rid of by infanticide, and that there is hardly a family in Stanboul where infanticide is not practiced in such cases as a mere matter of course, and without the least remorse or dread.” (“Horrible Traffic in Circassian Women – Infanticide in Turkey” New York Daily Times, August 6, 1856, p. 6)

Other reports from the nineteenth century speak of middle-aged and elderly African women, half-mad with grief and despair, roaming the streets of Constantinople begging for bread after being ejected by their Turkish owners. The same type of scene was repeated in cities throughout the Muslim world over the centuries, and illustrates the virulent racism was historically part and parcel of the Muslim and Arab mentality.

In highlighting these facts I do not seek to demonize a people or a civilization, I merely seek to redress the imbalance. For over half a century now Islamic history has been thoroughly sanitized in mainstream academic publications. Take for example, as typical of the genre, the following comment of Bernard Lewis, the doyen of Middle Eastern history at Princeton for several decades. “Islam, in contrast to ancient Rome and the modern colonial systems, accords the slave a certain legal status and assigns obligations as well as rights to the slaveowner. He is enjoined to treat his slave humanely and can be compelled by a qadi to sell or even manumit his slave if he fails in this duty. It is not, however, required, and the institution of slavery is not only recognized but elaborately regulated by Islamic law. Perhaps for this very reason the position of the slave in Muslim society was incomparably better than in either classical antiquity or nineteenth-century North and South America.” (What Went Wrong, p. 85)

It is true that since writing these words, and in the wake of 9/11, Professor Lewis has somewhat modified his rose-tinted view of Islamic culture. Nonetheless, tutored on such ideas, a whole new generation of academics has arisen to continue the process of sanitization, to the great detriment of the truth and Western civilization.

Emmet Scott is the author of Mohammed and Charlemagne Revisited: The History of a Controversy, and The Impact of Islam, both published by New English Review Press.

24 thoughts on “The African Slave Trade: The Islamic Connection”