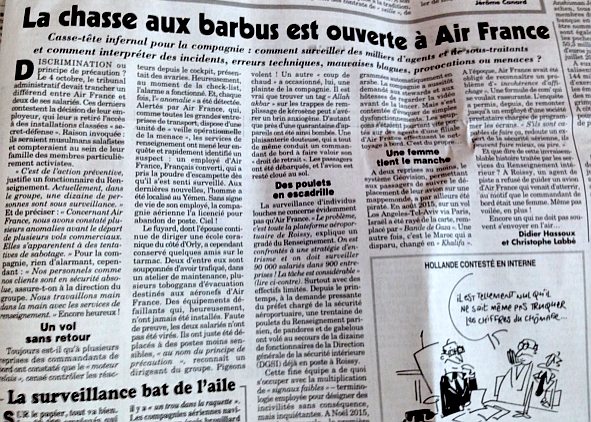 The following article about the antics of Salafists at the Charles de Gaulle Airport near Paris was translated by Ava Lon from a photo of a French newspaper page, with no online text available:

The hunt for bearded ones opened at Air France

Hellish puzzle for the company: how to monitor thousands of subcontractors and agents and how to interpret incidents, technical errors, bad jokes, provocations or threats?

Discrimination or the precautionary principle? On 4 October, the tribunal was supposed to pronounce a verdict in a dispute between Air France and two of its employees. These are challenging the decision of the employer, who withdrew their access to facilities classified “secret defense”. The invoked reason: they are Salafi Muslims and have family members who are particularly radical.

“This is a preventive action, explained an intelligence official. Currently in the group, a dozen people are under surveillance.” And he clarifies: “Regarding Air France, we found several anomalies before the departure of several commercial flights. They are akin to sabotage.” For the company, nothing alarming, however: “Our personnel and our clients are absolutely safe,” assures the management of the group. “We work very closely with the intelligence services.” Thank goodness!

A flight without return

Even so, commanders have repeatedly found that the “motor relay”, which is supposed to control the engines from the cockpit, showed damage. Fortunately, during the checklist the alarm worked. And each time, the “anomaly” was detected. Alerted by Air France, which, like all large transport companies, has an “operational threat watch” unit, the intelligence services conducted their investigation and quickly identified a suspect: an employee of Air France, a French convert, who took to his heels as soon as he felt watched. At last report, the man was located in Yemen. When they didn’t hear from their employee, the airline dismissed him for dereliction of duty. Good heavens!

However, the fugitive, whose wife continues to lead a Koranic school near Orly [close to the Paris airport], still has a few friends on the tarmac. Two of them are suspected of tampering with several evacuation slides for the Air France aircraft in a maintenance workshop. Faulty equipment which, fortunately, was never installed. Absent evidence against them, the two employees were not fired. They were just moved to less sensitive posts “in the name of the precautionary principle,” acknowledges the group leader. Another scare caused him a complaint from the company. It is true that finding a tag (“Allahu Akhbar”) on kerosene filling hatches can cause a bit of anxiety. Especially since nearly forty devices were so tagged. A dubious joke, which actually led a captain to assert his “withdrawal right”. The passengers were disembarked and the plane remained grounded.

The monitoring of suspicious individuals obviously concerned not only Air France. “The problem is the airport hub at Roissy,” said an intelligence officer. “We’re faced with an infiltration strategy, and we have to monitor 90,000 employees in 900 companies! The task is considerable.” Especially with limited staff. Since the spring, at the urging of the prefect responsible for airport security, thirty cops from Parisian Intelligence and customs officers flew to the rescue of ten officials of the Directorate General of Internal Security (ISB) already stationed at Roissy.

This fine team is busy with the proliferation of “weak signals” — terminology for incivilities, harmless but disturbing. At Christmas 2015, the first [missing part] programmed automatically in Arabic. The company immediately asked the stewards and stewardesses to watch the video before the launch; but they [the company] merely evoked simple malfunctions. Suspicions however soon started hovering over workers of a subsidiary of Air France who perform onboard cleaning. It’s clean…

A woman in command

On at least two occasions, the Geovision system, allowing passengers to track the movement of their aircraft on a world map, was also hacked. In August 2015, on a flight from Los Angeles to Tel Aviv via Paris, Israel was obliterated on the map, replaced by “Gaza Strip”. Another time, Morocco disappeared, exchanged for “Khalifa”. At the time Air France was obliged to recognize a problem of “display inconsistency”. A formula the company wanted to sound reassuring. The investigation has since traced back to an employee of a service company responsible for program screens. “If they are able to do this,” an expert on air safety fears, “they can do better or worse.”

And what about this incredible story that is being processed by the internal intelligence services? At Roissy, a ramp agent refused to guide an Air France plane that had just landed, on the grounds that the captain was a woman. Not even veiled, on top of it!

Another one who is not often taken to ‘heaven’…

25 thoughts on “Mujahideen Are Proliferating at the Roissy Airport”