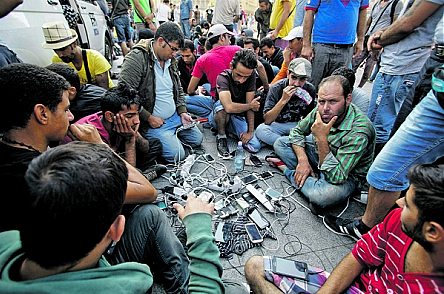 Yesterday we posted an interview with the Hungarian intelligence analyst László Földi about the deliberately engineered “refugee” crisis in Europe. Below is another interview with Mr. Földi on the same topic in which he breaks down the modus operandi of the migration into different tactics used within a 4th-generation warfare strategy to deconstruct the nation-states of Europe.

The discussion on the program centers on recent news stories. More details about one of them — the mass sale of SIM cards to the terrorists — may be found in an article below the video.

This interview was conducted as part of a radio program, so Vlad has added relevant file footage to accompany the discussion. Many thanks to CrossWare for the translation, and to Vlad Tepes for the subtitling:

The following article about the SIM cards (also translated by CrossWare) is from the Magyar Idők. The translator includes this note:

The Hungarian phone provider mentioned in the article, Magyar Telekom Nyrt, is the largest Hungarian telecommunications company. The former monopolist is now a subsidiary of Deutsche Telekom.

SIM Cards for the Terrorists, Too

To initiate an ISIS action, a single text message is enough.

As we know, some of the cards ended up in the hands of terrorists who executed the Paris (Bataclan) massacre and the Brussels (Airport) bombing.

Based on our information, the homeless man bought only a single card in person; even then he was just running an errand for foreign person. The rest of the cards were bought later in smaller batches using his personal information. The transactions continued for months.

For the question of why the terrorists and criminals needed so many cards, our source said usually one SIM card is used only once and then thrown away. For actions coordinated from the ISIS command center, most of the time a single call or a text message is enough.

Some of the cards ended up in the hands of the murderers of Paris and Brussels.

It’s almost impossible to track a communication if the cards are constantly replaced. The organized crime circles are utilizing a security gap, because a prepaid card can be bought at hundreds of fuel stations, newsstands and many other retail stores. The card needs a activation call in which the customer has to give his personal information, which is then forwarded to Ministry of Internal Affairs by the phone company. If the information matches, the device is activated. Of course that takes a couple of days, because the provider will send a messages to the customer’s address, which requires a second code to make the activation permanent. If this is not completed the service will be cancelled, but in the meantime — for days — the phone can be used.

The Magyar Idők inquired with Hungarian Telekom whether they brought to the attention of the authorities the exceptionally huge number of purchases. The company’s response was the following: ”There is no legal limit on how many cards a customer can have, so the provider not required to examine this.” The statement by Telekom may be legally correct, but there is no way a normal customer would own 200,000 SIM cards.

As you remember, our magazine reported on multiple occasion that more than ten members of the terrorist cells who were responsible for the massacre in Paris and the explosions in Brussels spent some time in Hungary. A large portion of those terrorists utilized the migration wave that arrived the territory of our country BEFORE the fence built on the border. The logistics organizer of the attacks, the Belgian-born French citizen Salah Abdeslam, visited Hungary three times before the terror actions. His primary task was the organization of travelling and housing for terrorists, and also communication, which included the acquisition of the necessary mobile phones.

11 thoughts on “László Földi: “A 4th-Generation Military Operation Against Europe””