The following report from the Belgian news site RTL.be describes a nest of mujahideen in Belgium who seem to have been running a dual operation: forging identity cards for terrorists, and distributing child pornography.

Alleged counterfeiters of Paris bombings and Brussels are being prosecuted for possession of child pornography images. Many video files were found in their computers. They are believed to have produced false papers including those for Salah Abdeslam and Khalid El Bakraoui, and are charged with participation in a criminal organization. RTL information developed by Benjamin Emmanuel Samyn and Tallarico.

Counterfeiters are accused of providing false documents for the terrorist cells involved with bombings in Paris and Brussels, such as the one below. 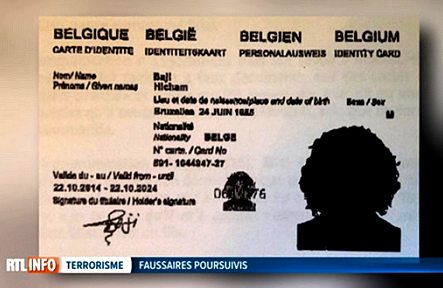 The counterfeiters’ main workshop was in Saint-Gilles. During a search, investigators seized the computer that was used for the production of false documents. The analysis of the machine revealed other offenses. “We note the presence of a large number of pornographic videos and pictures in which very many views represent young children, sometimes in innocent poses, sometimes in more suggestive poses, or even totally pornographic,” says an extract from the judicial record.

The discovery took place in an open statement about facts concerning the fake documents and forgery, because the investigation into the activities of the counterfeiters started before the attacks. The discovery of these child pornography materials has an impact on the procedure. “Investigators must inform the Public Prosecutor and the Public Prosecutor himself must find a new magistrate, and a new case will be opened,” said Frank Discepoli, criminal lawyer. “It will be totally different offenses, and it may well be that we have a judgment for a case and a judgment with another record, with two surveys and two completely different cases,” he says.

We don’t know the exact purpose of these images. They may have been intended for commercial use and distribution. “Either they broadcast them directly and those interested can get them on a website, or they are in direct contact with potential buyers, and they distribute these images to the purchaser himself piecemeal,” says Mr Discepoli.

In the case of counterfeiters, ten people were alarmed to varying degrees. One of them, Djamal Ouali, fled to Italy and was arrested.

He has since been transferred to Belgium, where he is still being detained.