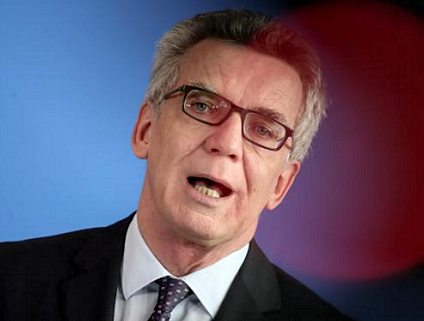 The German interior minister is making a belated effort to crack down on criminal and/or undesirable elements among the “refugees” who have arrived in Germany in the last few years. Common sense, rationality, and sanity would have indicated that the best way to keep Germany free of such people would have been to not invite them in in the first place. But common sense, rationality and sanity seem to be an impediment to one’s political career in Modern Multicultural Germany.

Many thanks to Ava Lon for this translation from Der Nordkurier:

With a clear tightening of the residence law, the Federal Ministry of the Interior wants to increase the pressure on all foreigners who thwart their deportation.

A spokeswoman confirmed that the draft of a “law for the better enforcement of the departure obligation” had gone to the ministries a week ago for a vote.

Among other things, the draft directive foresees that in the future the persons concerned should no longer be informed of planned deportations. The so-called departure custody is to be extended from up to four days to a maximum of fourteen days.

In addition, the Ministry intends to extend the list of grounds for deportation. In the future, those detained will be not only aliens who are liable to leave the country, but who are at risk of “escape”, but also those who have been convicted of a criminal offense, and people “who constitute a considerable danger to public safety”.

The proposal also introduces a kind of second-class tolerance. The “certificate of enforceable departure obligation” will apply to all those who do not participate in the clarification of their nationality or in obtaining of a passport, and also to foreigners whose country of origin deliberately delays the issuing of the necessary documents. Those who are classified as such, should not be given access to integration classes or institutions of further education. Possibilities that existed until now for those who are being tolerated until they get a legal residence permit would no longer be considered for this group.

The proposals are part of a comprehensive security package announced by the Federal Minister of the Interior Thomas de Maizière (CDU) in August. According to the Federal Government, at the end of August 210,296 foreigners who were obliged to leave Germany were staying in Germany. About three quarters of them had a toleration, for instance because of illness or because they had no passport.

Pro asylum appealed to the SPD to stop the law draft. It was “inhuman” and disproportionate. The German Attorneys-at-Law spoke of a “quick legislative shot, which may have fatal consequences”. The chairman of the DAV Asylum Committee, Gisela Seidler, said: “The idea of denying toleration when the person concerned no longer has a passport and the state of origin refuses a passport is completely absurd.” The idea that the behavior of the home country is attributable to the person concerned is legally incomprehensible.

Ulla Jelpke, the spokesman for the left-wing Bundestag, spoke of a “humanitarian declaration of bankruptcy.” She said that the proposed measures “constitute a form of psychological terror aimed at demoralizing the fugitives” after which they are to be deported as quickly as possible. Volker Beck (Greens) warned: “Whoever limits work opportunities, educational opportunities, and long-term prospects will not curb crime, but rather promote it.”