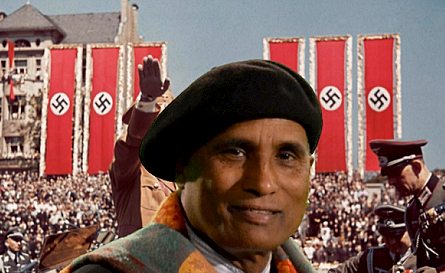 We’ve been reporting for the past week about the pushback against “Islamophobia” by Muslim NGOs at last month’s OSCE/ODIHR conference in Warsaw. In the comments on two previous posts about EMISCO, the colorful and flamboyant “Danish” human rights activist Bashy Quraishy took exception to our use of digitally altered images placing him in juxtaposition with Islamic State mujahideen and Nazi military officers. He seemed to think it was unfair to associate him with ISIS and/or Nazis.

Strangely enough, Mr. Quraishy doesn’t have any problem labeling as Nazis the people he disagrees with. In the following video you’ll not only witness his validation of Godwin’s law, you’ll also hear him call for “Islamophobic” organizations — he mentions Pax Europa by name — to be banished from OSCE/ODIHR events.

It appears that the ideological basis of Islam is not strong enough to stand up to rigorous criticism. The application of reason to Islam is like a bucket of water thrown over the head of the Wicked Witch of the West, melting it down into a shapeless, shrieking puddle.

The anti-liberal goal of EMISCO and other Muslim entities in Europe is now made clear: they intend to silence the Transatlantic Counterjihad. They want to suppress our participation in public fora, and if possible prosecute us in a court of law. Our actions are publicly compared to the 20th-century Holocaust against the Jews.

Needless to say, the activists of the Transatlantic Counterjihad are not intimidated by these totalitarian wannabes. As far as we’re concerned, their diatribes against “Islamophobia” are a tale told by an idiot, full of sound and fury, signifying nothing.

Below is a transcript of the relevant portion of Mr. Quraishy’s pronunciation of anathema against the critics of Islam (which was also mentioned here):

My organisation had worked very hard to create specific recommendations today, but we have provided that to ODIHR, so I shall limit my two minutes to deal with a growing Islamophobic trend in all OSCE sessions.

Listening to Pax Europa and other anti-Islamic organisations, participants must have heard that anti-Islam propaganda and anti-Islam rhetoric and lies have now reached this noble platform.

Madame Moderator, such shameless rants against the world’s second largest religion must not be accepted, must not be tolerated and must not be let loose at this forum. This is not freedom of expression or freedom of speech.

We all agree that people can say what they like, but freedom to demonise and have efforts to spread hatred towards 1.7 billion Muslims should not be accepted in OSCE sessions.

Professor Şenay was very right, when he mentioned that many Muslims find themselves under siege. Listening to the wording of such anti-Islam formulations today, I am reminded of the tactics and the terminology used by Nazis during the Second World War.

And believe me, my Jewish brothers and sisters and nephews in this session, should also please remember that what happened at that time, should never never happen today with Muslims. We are your partners.

21 thoughts on “Bashy Quraishy: “A Growing Islamophobic Trend in All OSCE Sessions””