Note: This post was a “sticky” feature originally published on October 18, and was on top for a couple of days. Scroll down for more recent items, including last night’s news feed. 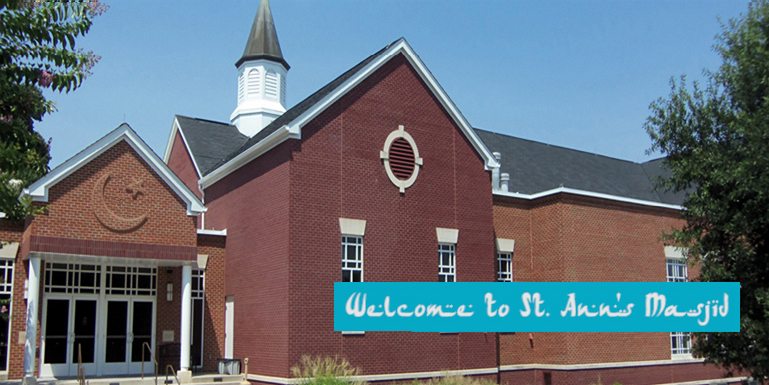 As we reported last week, a presentation on refugees was scheduled last night at the St. Ann Catholic Church in Arlington, Virginia. The event took place as planned. It was entitled “Refugee Resettlement in the U.S.: A National and Local Humanitarian Response”, and was jointly presented by officials of the federal Office of Refugee Resettlement and Catholic Charities.

Last night’s event was more important than it might seem at first glance. After all, it was just a little PowerPoint slide show given to a few dozen people by a government official about the wonderful cultural enrichment that will be brought to America by “Syrian” “refugees”, and about how essential it is for Americans to help these poor suffering people. What’s so important about that? 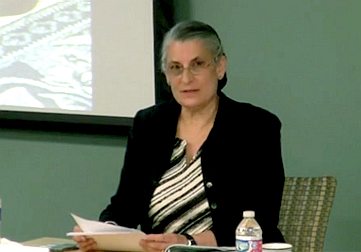 Anastasia Brown at a conference in 2015

She was assisted by Patricia S. Maloof, the Program Director of Migration and Refugee Services of Catholic Charities of the Diocese of Arlington. 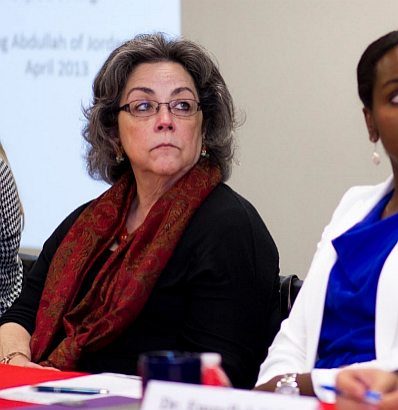 Patricia Maloof at a conference at Virginia International University, ‘Dissecting a Complex Conflict: ISIS, the Syrian Refugee Crisis, and the Humanitarian Response’, October 2015

The event was sponsored by Marie Powell, the former superintendent of schools in the Arlington, Virginia Diocese of the Catholic Church and the retired executive director of the Secretariat of Catholic Education for the U.S. Conference of Catholic Bishops. 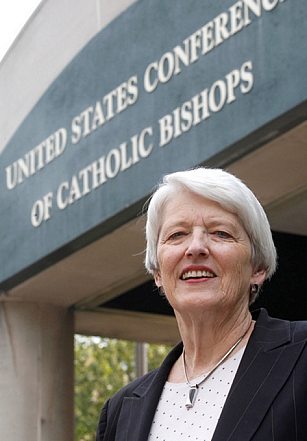 So what we saw at St. Ann Church last night was, in effect, a joint venture by the United States Government and the U.S. Conference of Catholic Bishops. Catholic charitable organizations rake in hundreds of millions of dollars every year for their assistance in the Refugee Resettlement program, so the Church and the Diocese of Arlington are hardly disinterested parties.

Ms. Brown told the audience that she was not there in her official capacity as an employee of the Office of Refugee Resettlement (ORR). However, as you’ll see in the more detailed report below, her slide show was watermarked not with her own name, but with the official logo of a federal agency. So Anastasia Brown seems to be Schrödinger’s bureaucrat — both official and unofficial at the same time.

The fact that she was ostensibly speaking ex officio provided the justification for her refusal to answer questions on the record. In addition, the organizers were at pains to emphasize their request that there should be no record of the event at all. Sources who were present say there was an implied attempt to intimidate attendees into keeping the presentation off the record. Marie Powell told the audience that they were “not allowed to write or blog about the event.” The leaders explicitly said “no press coverage” several times. They forbade any taping of the event.

Well, it got taped, anyway. A 90-minute audiotape recorded via a handheld microphone is below.

Why should such events go unrecorded and unreported?

Why the secrecy? What happened to the most transparent administration in history?

And, if they want to keep it a secret, why are they talking about it at a parish church in Arlington? Are they perhaps recruiting well-meaning but unpaid volunteer drones to help them with the resettlement process?

This is important, because these refugees — most of them unvetted Muslims — are, in effect, being parachuted into communities in the dead of night. Localities are not being consulted. Local residents are largely unaware of what is happening. And religious “charities” working in close cooperation with the federal government (thank you, George W. Bush, for those “faith-based initiatives”) receive lucrative contracts for managing the logistics and doing the initial placement of the migrants.

This audio is raw, and has not yet been transcribed. I’m calling on the distributed intelligence of the Internet for help with a transcript. In particular, readers who were actually present at last night’s event should be able to tell us which parts to focus on. Only some of the tape is interesting and worth transcribing, so listen to it and see what sort of nuggets you can find amidst all the dross. Unfortunately, the quality of the audio leaves something to be desired.

And email me first (gatesofvienna [at] chromatism [dot] net), before you get started on any transcribing. Let me know the start time and finish time of the section you intend to transcribe, and I’ll tell you if anyone else has already started work on it. We want to avoid duplication of effort, if possible. Then, when you send in the completed transcript, include the start and finish times, so Vlad will know where to cut when we produce shorter excerpts based on the tape.

Here’s the raw audio that we want to crowdsource. Many thanks to Vlad Tepes for uploading this video:

A Gates of Vienna reader named Belinda attended the event at St. Ann Church, and kindly sent us this description of what happened:

The audience was told by Marie Powell, who sponsored/led the event, that they were “not allowed to write or blog about the event”. She didn’t say that the speakers were merely speaking off the record but that “no press coverage” was allowed. They also forbade any taping of the event.

The federal employee presenting, Anastasia Brown, read off a PowerPoint presentation labeled “Office of Refugee Resettlement”. Every slide had “Administration for Children and Families” at the bottom. You can see the logo in her PowerPoint here, in the bottom right of the page right above “Department of Health and Human Services”. Her name did not appear to be in the presentation at all — just her office.

There was a public hearing given by a federal official, and the public was instructed that they’re not permitted to write about it or record it. This is why people don’t trust the federal government.

They refused to answer any pertinent questions.

This was presented as though they were consulting the public, but in actuality they were telling the public how it was going to happen, and the public just had to accept it. They were not interested in the public’s input, or what the public thinks.

It was tantamount to attempted intimidation when they implied that there would be consequences if people wrote about it — they explicitly said “no press coverage” several times before the event. They could have simply said, “This is Chatham House rules, and therefore not attributable to any speaker.” But they didn’t say that.

The person who said, “You’re not allowed to write or blog” about the event was the representative of the sponsor, Marie Powell. Ms. Powell also introduced everyone, including the federal official who was speaking to the public.

Anastasia Brown is listed here at ORR as Director, Division of Refugee Services, Office of Refugee Resettlement, Department of Health and Human Services. Before joining the administration, she was with Refugee Council USA (RCUSA). From 1999 to July 2015, she was Director of Resettlement Services for the US Conference of Catholic Bishops.

In case you missed it earlier, this was the announcement in the St. Ann Church parish bulletin [pdf]:

Refugee Resettlement in the U.S. — With Anastasia Brown and Patricia Maloof

Do you have questions about the need and process for resettling refugees in the United States? St. Ann Adult Religious Enrichment Committee is hosting a presentation by two experts in the field. On Monday, October 17, 2016, a program focusing on Refugee Resettlement in the U.S.: A National and Local Humanitarian Response will be held in the St. Ann Parish Hall from 7:30 to 9:00 p.m. We are very fortunate that such knowledgeable persons have accepted our invitation to speak at St. Ann. Anastasia Brown currently serves as Director of the Division of Refugee Services in the U.S. Department of Health and Human Services Office of Refugee Resettlement. Prior to this position, she served for many years as the Director of Refugee Resettlement for the U.S. Conference of Catholic Bishops. Patricia S. Maloof is the current Program Director of Migration and Refugee Services of Catholic Charities of the Diocese of Arlington and has previous experience at the national level with resettling refugees and other legal immigrants. We hope many of you will come and participate in this very timely program.