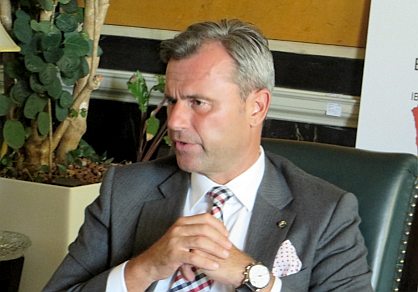 After voting “irregularities” in its presidential election last May, Austria planned to redo the election on October 2. However, it seems there has been a problem with the glue used for the postal ballots, so the new vote could be postponed even longer.

Whenever it happens, Norbert Hofer, the candidate for the FPÖ (Freiheitliche Partei Österreichs, Austrian Freedom Party) is expected to win this time. And when he does, he intends to join forces with the Visegrad Four — Hungary, Czechia, Slovakia, and Poland.

Here’s the report from The Express:

Austria’s right-wing presidential candidate Norbert Hofer aims to join forces with the Czech Republic, Hungary, Poland and Slovakia in a bid to tackle the migrant crisis engulfing the continent, if he takes power.

Ahead of the upcoming EU summit in a castle in the Slovak capital of Bratislava on Friday, the political powers in central Europe have discussed their alliance.

The latest development comes after Mr Hofer recently called for the “wise voice” of Central Eastern Europe to have “more influence in the EU”.

Berlin and Brussels could also be interested in joining “Habsburg light” — named after the former central European monarchy — or “Visegard Plus” because the Balkan countries are also expected to express interest in membership.