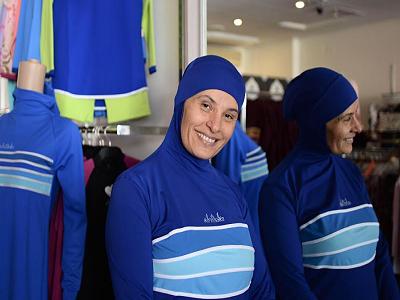 According to skin cancer specialists, Western women are increasingly adopting the wearing of burkinis as a means to protect their health.

Many thanks to Nash Montana for translating this article from FOCUS Online:

In the view of medical experts, the politically highly controversial burkini is a very effective method for the prevention of skin cancer. Since the protection afforded by sunscreens, according to one study, is only limited, appropriate clothing would be the best protection, said the president of the European association of Dermatology/Oncology, Claus Garbe (photo), last Wednesday in Vienna.

“The burkini is a rewarding variant.” The burkini supposedly was originally invented by a woman from Australia. In Australia, the danger of contracting skin cancer is especially high. 50% of burkinis are bought by non-Muslims, opines Garbe.

UV rays are often underestimated when sunbathing, and they facilitate melanoma as well as white skin cancer. In recent years the number of new skin cancer cases has grown significantly, according to information from the German Cancer Center.

Heated debate about burkinis in Europe

The two forms of skin cancer, the basal cell- and the squamous cell carcinoma, often appear at those places on the body that have been exposed to light. The so-called malignant melanoma, which is an especially serious form of skin cancer, on the other hand appear mostly on covered parts of the body.

The wearing by Muslim women of burkinis that cover the entire body has kicked off a heated political debate in Europe. Some politicians see the burkini as a sign of an unwillingness to integrate. The Court in Nice just recently rejected the burkini ban from July.