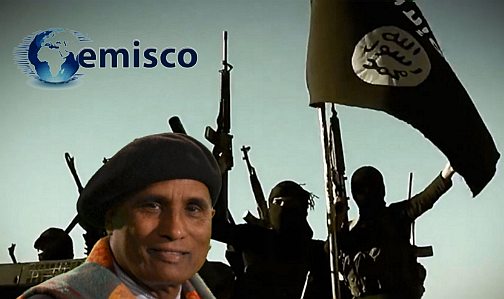 Last night we posted a report by the Counterjihad Collective about an EMISCO side event at this week’s OSCE/HDIM conference in Warsaw, “The Consequences of Islamophobic Discourse in the European Political Parties”. The hosts of the event were, naturally, Muslims, and the chairman was Bashy Quraishy, who is well-known any “Islamophobe” who has attended previous OSCE conferences.

We were pleasantly surprised this morning to find that Mr. Quraishy had dropped by and left a comment on that post. It seems that he subscribes to the time-honored maxim: “There’s no such thing as bad publicity.” But he must have forgotten the corollary maxim: “I don’t care what you say about me, as long as you spell my name right.” In this case, he misspelled the name of his own organization (not to mention this blog’s eponymous city) in his comment:

Dear friends in Gates of Bienna
Thanks for your advertisement of Emisco’s event. It is so kind of you.
Here is a short video from the main session which might be beneficial for your readers.
Move Love
Bashy Quraishy
Secretary General — Emusco

So who is Bashy Quraishy? He is a “Danish” advocate for minority rights, and the General Secretary (or Secretary General, both versions of the title are extant) of EMISCO, the European Muslim Initiative for Social Cohesion. None of this would be of any concern to us, except that EMISCO partners with OSCE/HDIM, as do many other Muslim-European NGOs. Bashy Quraishy is a familiar fixture at OSCE events, with his trademark black beret and parti-colored trench coat (or scarf, I’m not sure which). 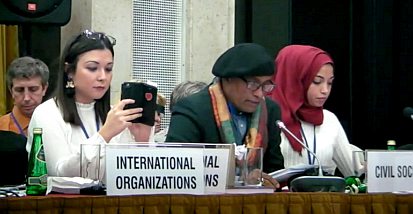 Mr. Quraishy has a website, www.bashy.dk, which proclaims its advocacy of “Human rights, Justice, and Freedom”. Am I caviling if I point out that those three terms have different meanings for Muslims than they do for non-Muslims? In Islam, “Human rights” means those rights enumerated by the Cairo Declaration of Human Rights in Islam — that is, all Islamic rights are defined by sharia law. “Justice” means the application of sharia law to all human activities. “Freedom” means being liberated from man-made (non-Muslim) law so that one lives entirely under the rule of sharia.

When dealing with Islam, everything comes down to sharia law, which is why “Islamophobes” journey to Warsaw to fight the encroachment of sharia in international bodies such as the OSCE. Islam likes to hide behind its status as a religion to avoid criticism, but in fact what we “Islamophobes” object to is Islamic law, which is a political system. The tenets of sharia, a.k.a. Political Islam, form the bulk of Islamic doctrine.

So how does EMISCO promote social cohesion? When Bashy Quraishy appears on a podium with a “partner” from a progressive non-Muslim group, he is full of sunshine and rainbows and peace for all mankind. He can reel out hours of the usual platitudes that Muslims keep handy to snow the infidel. Everything is all multicultural and “interfaith”.

But if you probe beneath the surface and try to talk about what devout Muslims really believe in, the jackboots and truncheons appear. Yesterday, at Session 11 of the plenary HDIM meeting in Warsaw, Mr. Quraishy had this to say about people who criticize Islamic doctrines:

My organisation had worked very hard to create specific recommendations today, but we have provided that already to you, so I shall limit my two minutes to deal with a growing Islamophobic trend in OSCE session.

Listening to Pax Europa and other anti-Islamic organisations, participants must have heard that anti-Islam propaganda and anti-Islam rhetoric and lies have now reached this noble platform.

Madame Moderator, such shameless rants against the world’s second largest religion must not be accepted, must not be tolerated and must not be let loose at this forum. This is not freedom of expression or freedom of speech.

We all agree that people can say what they like, but freedom to demonise and have efforts to spread hatred towards 1.7 billion Muslims should not be accepted in OSCE sessions.

Professor Şenay was very right, when he mentioned that many Muslims find themselves under siege. Listening to the wording of such anti-Islam formulations today, I am reminded of the tactics and the terminology used by Nazis during the Second World War.

And believe me, my Jewish brothers and sisters and nephews in this session, should also please remember that what happened at that time, should never never happen today with Muslims.

Ah, yes — roll out the Nazis, because nothing makes gutmenschen run for cover faster than being accused of Nazism. Then, just to make sure, invoke the Jews. That softens up the audience, so that the impact of what EMISCO is demanding — legal suppression of the criticism of Islam — is mitigated.

If we have to surrender some of our core civil liberties to keep the Nazis from returning — well, that’s not such a bad trade-off, is it?

Bear in mind that Bashy Quraishy mentioned a specific Counterjihad organization — Pax Europa, the organization that sponsored Elisabeth Sabaditsch-Wolff’s attendance at OSCE Warsaw. That is, he is after us, and he wants us locked up for saying the things we do.

Last night’s report described the strange logic (if one may call it that) employed by EMISCO, Bashy Quraishy, Bülent Şenay, et al. to deal with the issue of Islamophobia, which has never been satisfactorily defined. What they assert may be summarized by these three bullet points:

“Orwellian” falls short as a description of these strange demands. “Hellerian” is more apropos, in reference to this passage from Catch 22 by Joseph Heller:

“Catch-22,” the old woman repeated, rocking her head up and down. “Catch-22. Catch-22 says they have a right to do anything we can’t stop them from doing.”

“Didn’t they show it to you?” Yossarian demanded, stamping about in anger and distress. “Didn’t you even make them read it?”

“What law says they don’t have to?”

They have a right to do anything we can’t stop them from doing.

21 thoughts on “We Don’t Need No Stinkin’ Definition!”