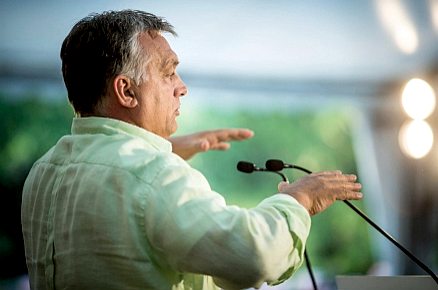 On October 2 Hungary will hold a referendum to decide whether or not it will accept its quota of “refugees” as assigned by the mandarins of the EU in Brussels. Prime Minister Viktor Orbán’s staunch resistance to the diktats of the European Commission have prompted near-open warfare on the part of the EU bureaucrats. The referendum has been called “illegal” and “vile”, and yesterday the Foreign Minister of Luxembourg said that Hungary should be suspended from the European Union for treating refugees like “animals”.

On Monday Viktor Orbán gave a speech to open the fall session of Parliament. In his speech to Parliament Mr. Orbán refers to a statement by Martin Schulz, the president of the European Parliament, about his intention of bypassing national governments in the resettlement of migrants. Mr. Schulz made his remarks in March of this year, and the quote may be found behind a paywall in Stern. The March 26 edition of BudaPost has an excerpt: 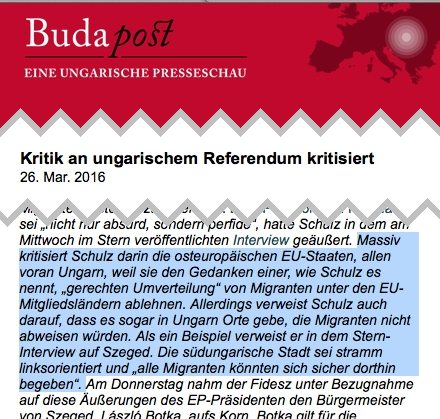 And as translated by Nash Montana:

Schulz massively criticized the Eastern European EU states, especially Hungary, because they reject the idea of a “fair distribution” of migrants among EU states. But in the interview Schulz also pointed out that even in Hungary there are places where migrants aren’t sent back. As an example he named the city of Szeged. The south Hungarian city is very left-oriented and “all migrants could safely go there”.

Below is a subtitled video of Viktor Orbán’s speech before Parliament. Many thanks to CrossWare for the translation, and to Vlad Tepes for the subtitling:

Mr. Orbán recently made similar remarks at a civil-society gathering in Hungary. The following account was published by the Hungarian public affairs news site PestiSrácok.hu (translation by CrossWare):

Viktor Orbán: “Our enemies are not liberals, but nihilists” — Here is the speech from Kötcse!*

“What our enemies represent today has nothing to do with the thoughts and ideas of the great liberal thinkers of the past. This is pure nihilism, and this nihilist point of view stealthily came upon the world and the institutions of the European Union,” said Viktor Orbán at the Civilian Picnic in Kötcse. He emphasized: “The Communists are like the Terminator: they can reassemble themselves from some crumbled pieces [he’s thinking of the T-1000 — translator]. In the closed forum the Prime Minister explained: “In the rearrangement, what is happening now in the world will have very serious consequences for Europe. In this situation we Europeans have not yet even decided what we want to do.” In reference to Brussels politics, the Prime Minister Orbán said our problems are not with the migrants, but with Brussels. “Logically, if they invite those unfortunate people, they will come. Our chance is now to use the referendum to derail the EU’s efforts, and hope our example will echo across Europe and start a wave, so that after next spring a different leadership is installed in the institutions of the Union. Let’s not forget that the nihilistic elite think of Central Europe as an area in need of change, a dilution of population,” emphasized Viktor Orbán.

Viktor Orbán again made it clear in a high-impact, forward-looking speech at the Civilian Picnic in Kötcse. In the closed forum the Prime Minister listed the almost decade-long results of his party. He included that under his direction the government made widespread changes almost all parts of the economy. He emphasized that Hungary is the first country in Europe that protected its citizens from the illegal immigrants at the border.

In the closed forum he explained: We fought our most important battles but we can’t sheathe our swords.” “The big question is what to do with the weapon in peacetime? We must learn to slice bread with it,” said the Prime Minister.

“In the rearrangement, what is happening right now in the world will have very serious consequences for Hungary and for Europe. In this situation, have we Europeans not even decided yet what we want to do?” We must answer this: Do we want nations, or do we want a united Europe? Do we want family and children, or can we not even decide who is a man or a woman? Now as the sixtieth anniversary of the Treaty of Rome comes up next spring, we must answer this: Do we have any common values at all?” said Viktor Orbán

“What our enemies represent today has nothing to do with the thoughts and ideas of the great liberal thinkers of the past. This is pure nihilism, and this nihilist point of view stealthily came upon the world and the institutions of the European Union. Well-known representatives are: [European Commission President Jean-Claude] Juncker, [MEP Guy] Verhofstadt and [European Parliament President Martin ] Schulz. The nihilists are a tiny minority in society, but they have already taken over the European elite. What István Csurka said about the SZDSZ (Hungarian Liberal Party) is very precisely the essence of things: they did not want to win an election, they wanted to sit in the jury. Just like the nihilist elite grabbed the power and sat in the role of jury in the European institutions. They are the ones who reject all discussions and hide behind the lie of political correctness. As [former French President Nicolas] Sarkozy phrased it: political correctness, PC, is nothing else but thought police, but to quote him again: we must get rid of the terror of the minorities. We must place the PC logic and arguments in brackets. Strange, but BREXIT is a great opportunity for some self-examination, to see what this elite is, which was rejected by a country of 65 million people,” pointed out the Hungarian prime minister.

In Viktor Orbán’s opinion, the political war which is now taking place via the migrant issue is a huge opportunity for both parties. “For them it is a fast road to destroying the Christian- and nation-based Europe, to change the European Union’s ethnic basis. They know the Muslims will never vote for parties with Christian roots, so with huge number of Muslim masses they can push traditional conservative parties from the power forever. But the war is a huge opportunity for the nations with Christian roots, too. Our great opportunity is to solve the migrant discussions outside of the system of political correctness. Our promising strategy is with the V4, and maybe soon with Austria, to force them to take this decision out of the hands of the elite and place it in the people’s hands with referendums.”, is how Viktor Orbán summed it up.

He highlighted that of course he realistically measures Hungary’s strength and influence in the world and the Union, so it is not his goal to wage this fight alone. That would irresponsible. In the PM’s opinion, we will win this round only if first France, then Italy and finally maybe Germany were to discover the truth of the Central Europeans. “Germany is the hardest case, because in their ‘directed publicity’ it is impossible to have honest discussions about migrant problems. We have only known this in dictatorships, but I guess we have to accept that there are some democracies where practicing free speech can have existential consequences and expressing certain opinions is not recommended,” said Viktor Orbán.

The prime minister emphasized that, as the 70-year-old construction of the EU falls apart in front of our eyes, we retain the right not to bear the consequences of the bad decisions of others. Quoting József Szájer, a member of European Parliament, he said: We have the right not to take on the problems of others. The Hungarian government and the V4 still have the chance to represent the countries not yet fallen.

“I say it in every European forum: if we want to help, we should help where the problem is, and first we must help the Christians. If Europe knows what is good for it and wants a common army, then it must rule the Mediterranean Sea and its coasts, just like the ancient Roman military leaders did. They sank all empty and unauthorized ships. Of course they should rescue all migrants first and take them back to Africa to a migrant camp designed for about two to three million people, somewhere in Libya. When I talk about this in the specific forums, a couple of people may go along, but the European elite do not even understand the suggestion and endlessly discuss how they can provide better and more devoted care to all the poor people pouring in here,” said Viktor Orbán at the picnic.

In Kötcse the prime minister also talked about how the government has long created new problems because it is impossible to fight with the communists anymore, because we do not even know which party they are in now, even if we look at it with a magnifying glass… [The original post-communist party broke down and a dozen new seemingly “democratic” parties were created by them, many directly supported by George Soros, as shown in the email hack — translator]. “Of course we know that they are exactly like the Terminator: from a couple of crumbled pieces they can emerge again,” mused Viktor Orbán. The PM pointed out as a result of the systemic weakness of the last six years as the people had very little time to spend on meaningful political discourse, and it is time to invest in this area. In the future they will have to expend some effort on education to invigorate the intellectual domain.

29 thoughts on “Viktor Orbán: This is Nihilism, Not Liberalism”