There has been a wave of attacks in which crazy people (who may also have been bullied at school) attack people, especially police officers, with guns, machetes, knives, axes, and anything else handy that might inflict bodily harm, all while screaming “Allahu Akhbar!”

The following article from the news site Boulevard Voltaire discusses all the lunatic allahu-akhbar attacks that have occurred recently in France. Many thanks to Ava Lon for the translation:

When is the psychiatric hospital “Allahu Akbar” opening?

According to La Depeche du Midi, a young security assistant named Valentin, 23 years old, was brutally assaulted with a knife, Tuesday, August 30 early afternoon, in a police station in Toulouse, rue du Rempart St.-Étienne by an individual who attempted to cut his throat.

The individual definitely prepared his attack carefully, since he entered the office on the pretext of filing a complaint, before jumping on the young detective and trying to take his gun. A struggle ensued. Seeing that he could not take possession of the gun, he pulled out a kitchen knife and stabbed the young auxiliary in the throat. Fortunately, colleagues pounced on the assailant and neutralized him. They were then able to help the victim, who was taken to the hospital serious injuries.

The arrested attacker, aged 31, is of Algerian origin, as we learned from a police union source. He allegedly attacked the safety deputy, according to the same source, “Because he represents France.” You notice: neither taboo word — terrorist and radical Islamic — have been uttered neither by the police nor by journalists. They could have at least asked the question. Well, no, the only thing Luke Escoda of the Alliance union said was: “The individual was apparently fixated on DGSI [General Directorate for Internal Security — French intelligence agency]” and “was known to have psychiatric disorders.”

Thus, without any investigation, without searching the home of the perpetrator, without interrogating his family, without having checked the contents of his computer, without having made a list of his contacts on his smartphone, the authorities of this country know, a priori, that our attacker is insane, a crazy, as we say in the South. France Info goes even further by saying: “According to a source from the Interior Ministry, the attack wasn’t a terrorist attack.”

The Ministry of Interior is incessantly warning people about future and possible attacks, and when an act looks like it, the media and the state begin by saying, “Make no mistake, this is not a terrorist attack!”

We will be soon explaining that the Algerian had just read an article about DGSI, walked across the neighborhood, found a knife on the sidewalk near the police station, and wondered what he could well do with it, and there, suddenly, he tripped: Dr. Jekyll from Maghreb then became Mister Hyde from Toulouse. 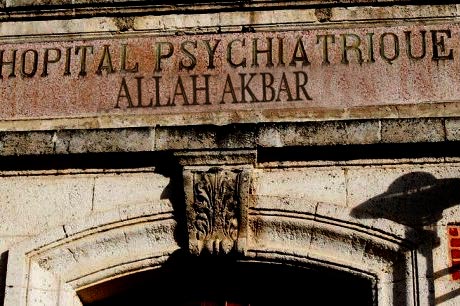 In any case, I can see one thing: the huge number of Muslims who have psychiatric disorders. Between the one who crushed a dozen pedestrians in Dijon, another, who attacked an officer at a police station, the one who cut off the head of his boss and hung on a fence — I stop my list here due to the lack of space — there really is enough to fill all the beds in a psychiatric hospital.

So let me ask the authorities of this country: when will the opening of the hospital “Allahu Akhbar” take place?

19 thoughts on “The Lunatic is in the Mosque”