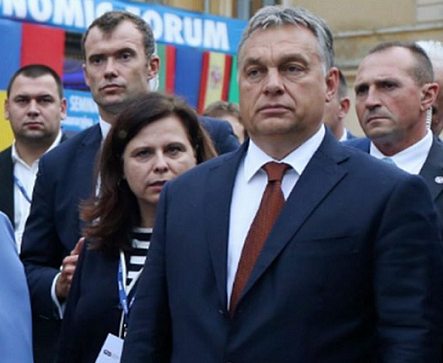 The Krynica Economic Forum was held this week in Krynica, Poland. Representatives from the Visegrad Four (Poland, Hungary, Czechia, and Slovakia) plus Ukraine took part. The gathering honored Hungarian Prime Minister Viktor Orbán by giving him the Man of the Year Award.

In a press release, Mr. Orbán outlined his ideas about the future of Ukraine in Europe. He also discussed the European migration crisis and the most productive ways that the Central European countries can deal with it.

Many thanks to CrossWare for translating this summary from the Hungarian daily Magyar Idők:

The Visegrad countries agreed that they need the European Union (EU); not just any kind, but a strong one — said Prime Minister Viktor Orbán in his press release from the Economic Forum conference in Krynica, Poland.

In the company of representatives of the Visegrad countries (Czech Republic, Poland, Hungary, Slovakia), Viktor Orbán and the Ukrainian Prime Minister made the statement and he explained: today the Union is rich but weak, and that is the worst possible combination. “This brought us troubles,” the migration, which is an uncontrolled process.

“We must end this. Since we are Christian countries, we know what command we must follow based on our morals, but we must bring help to where it is needed instead of bringing the problem to us,” emphasized the Prime Minister.

He added: defense against the uncontrolled migration must be placed as far south as possible, so we need to help Bulgaria.

After the prime ministers’ discussion, Viktor Orbán explained: when Ukraine decided to change its historical course and take a new direction, it got nothing but friendly and encouraging voices from the EU, and received a promise: the members of the Union would be ready to accept Ukraine step by step into its natural community, as a Central European country and a member of the Union, where it belongs.

But in the last two years nothing really happened in that regard, and what did happen should not have —mentioning the Dutch referendum, where they rejected the ratification of the association agreement between the EU and Ukraine.

Viktor Orbán thinks the situation is very difficult, and the EU has its own problems. There is “expansion exhaustion”, and it has run out of countries who would continue to support Ukraine. The V4 countries remain friends of Ukraine and they support a faster approach to joining the EU. The PM thinks that the difficulties of EU should not delay giving Ukraine people visa-free travel; they have to keep their word as promised, and the V4 are committed to this.

Viktor Orbán, together with the prime ministers of the Visegrad countries and the Ukrainian prime minister, took part in a discussion where he highlighted: a whole generation of European politicians had a “secret dream”, that they can use the EU to achieve the weakening of the member states’ national, religious, and historic identities, and that all this would be replaced by a new European identity. But we found out there is no such identity that could replace the old ones, he said. He added: now it is proven that the only successful countries are the ones with strong identities.

Viktor Orbán explained: Twenty years ago they told young people in Europe: if you regularly go to school, respect the law and work diligently then you will go further and have a fuller life than your parents did.

“Now the new generation of young people would just laugh in most union member state, if someone would say this to them,” he said. “Now the European dream has moved into the Central European region.”

Concerning the migration, the prime minister said the following: Here we all are representatives from countries that have are an outgrowth of a Christian culture; we can’t behave as if “we have a rock in place of our hearts”. We have conflicting feelings: first we feel threatened by the migration; on the other hand we feel sorry for the refugees, he explained. He commented: we must do both, help the needy and protect our identities.

He confirmed his previous media statements: We need to help, but we have bring the help where the trouble is, and Europe does not do this today.

Europe is Rich But Weak

Viktor Orbán reminded us: the migration flow is coming from the south, and Hungary is the southernmost country of the Visegrad group.

“War is not the true reason for the migration, but the fact that Europe is rich and provides a good life, and others want that, too,” said Orbán.

He emphasized: we must make it clear there is a lawful way to enter Europe, otherwise everything we worked for so far will be lost, and we will be overrun by another community that has a much stronger identity. Many overestimated the integrating effect of multiculturalism, and underestimated the ability of the freshly-arrived to keep their own identity, proclaimed Orbán.

The PM stated: we must defend our borders, but this is a difficult task. Viktor Orbán thanked everybody who helped Hungary to protect its southern border, and asked his audience to look at Hungarians as they appear in history: gallant warriors of border fortresses. His statement was followed by applause.

Concerning the relationship between the EU and Ukraine, the Prime Minister explained: today Europe plays a much smaller role in Ukraine’s future than the USA or Russia. In the western Balkans Russia and Turkey can end up playing a leading role. So if we want to help Ukraine, first Europe must regain its self-confidence and its ability to take action. We must reform and change the Union in order to help, stated Orbán.

At the end of the conversation the prime ministers spoken about the idea of a V4 television channel. Viktor Orbán welcomed the initiative, and he said: “We should have had that ten or fifteen years ago; we would have got out of the chaotic world of the post-communist era media that much sooner.”

26 thoughts on “The European Dream Moved Into Central Europe”