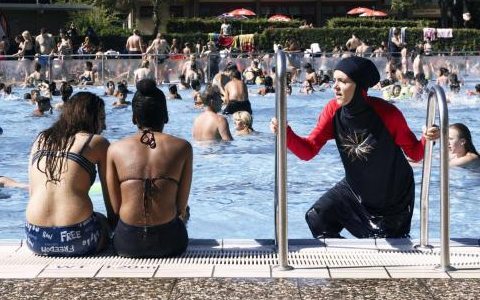 The following discussion of the context of the burkini controversy was written in German and mainly concerns recent events in France. Many thanks to Nash Montana for translating this post from Gudrun Eussner’s blog.

Visit the original article to find the rest of the links and images:

The Burkini is the Islamic Declaration of War

In France and Germany, the debate around the burkini is causing waves, over there high ones; over here small ripples. The arguments against the burkini are numerous, but most of them miss the target.

That piece of fabric does not infringe on secularism. Hygiene also isn’t a good enough argument. It is opposing the peaceful coexistence of (still) non-Islamic states, in which it is being paraded on women’s bodies at the beach and at public pools.

Next to the headscarf, the hijab, the niqab, the burka, next to beard and nightgown and crochet cap, the burkini is one more uniform of these religious warriors. The so-called disguises show a worried and increasingly baffled society the status of their Islamization, and to the Muslims they signal how far they can go without meeting any opposition.

The Left and other Islamophilic media sources take the side — due to their ideology and/or their business interests with Islamic-ruled states — of the critics of a burkini ban: Force (SPIEGEL), Hysteria (WELT), Police intervene (ZEIT), not the Burkini but the judiciary splits society (ZEIT), police heat up burkini debate (FAZ). Italy won’t even begin to try to ban the burkini, purely out of fear of terrorist attacks by Muslims. Le Figaro reports about the debate neutrally. Refreshing!

The shares of Arabic investors of German and French companies, media and/or advertising revenues of the U.A.E. and others cannot be compromised. To that end, one gladly sells out our Western values, and puts an end to the roots of our common mutual norms! Those values stymie the manipulation and domination of our citizens anyway. Away with the Ten Commandments, bring us the rules of Islam!

Such shares are meaningless? Never laughed harder! In Manhattan, Qatar Investment Authority (QIA) just bought 10% of the Empire State Building! Islam also buys into symbols and pillars of Western culture and civilization, see the “Day of the Open Mosque” during our National Holiday. In French we call that “faire de l’entrisme”, a “tactic employed by certain organizations (unions, political parties) with the intent of planting members into another organization in order to change their methods and goals.”

Kuwait has had a 6.8% share at Daimler for decades. Now one can finally figure out why the Daimler boss Dieter Zetsche, the guy with the funny white mustache, is so enthusiastic about Muslim immigrants. And besides, who of all the institutional and private investors are Muslims has not been shown with this, either. But it’s entirely plausible that Daimler is going to soon add to their star the Arabic half-moon. Allahu Akbar!

How could it be any other way than that George Soros’ hands are directly or indirectly involved in this? In France there exists an Islamic association which files suit against the Burkini ban in all cities and towns, and on all levels of court: The Comité contre l’Islamophobie en France (CCIF) is financed by that friend of mankind George Soros. You can see the logo of the CCIF is below right. The association has worked for the Islamization of France since 2003. Their representative, Marwan Muhammad, who is coordinating all the lawsuits, explained during a conference in the year 2002, in a mosque in Orly:

Jean-Patrick Grumberg spent some time with the logo of the CCIF on DREUZ.info, on January 11, 2013. He asks, “Qui est vraiment cet étrange CCIF qui poursuit Ivan Rioufol en justice.” Who is really this weird CCIF that persecutes Ivan Rioufol? Ivan Rioufol is a journalist and columnist at the ‘Le Figaro’. Grumberg begins the examination of the logo in the form as it is posted on the website of the CCIF. One wonders about the order and the composition of the letters, but both C’s, the smaller one mirror-inverted below the bigger C, could be read as an S, and pronounced that would be “sif”, سَيْف, ‘The Sword’. This is a popular first name with radical Muslims.

Then Jean-Patrick Grumberg turns the logo 90 degrees to the right, so that the “f” turns into a stylized Arabic sword in the way that it is shown on the national flag of Saudi Arabia, the shahada flag: La ilaha illahah Muhammadur Rasulullah. It means the spreading of Islam with the sword.

In Western countries we call this sword swung by religious warriors a “machete”, just like in France the suicide murderers aren’t called assassins, after the Muslim Assassins of Hasan-e Sabah, but kamikaze. The redirection away from Islam as the source of terrorist actions.

The website of the CCIF has been redesigned in the meantime and has been freed of its logo. The name has also been slightly changed; the committee is now a collective, which works a lot better for the enrollment of a leftist clientele. Ultimately Marwan Muhammad, born in 1978, father Egyptian, mother Algerian, author and statistician, has worked himself into the ranks of the OSCE, which will strengthen the CCIF’s position in France. Said association has, according to their executive director, 5,000 members by now who have dedicated themselves — to the benefit of a smooth Islamization of France — to make criticism of Islam based on scientifically-funded expression of opinions into an offense that can be legally prosecuted (Picture of Marwan Muhammad with zebiba — banged forehead — symbol of practicing Muslims).

The project CCIF can be documented with various concepts from the world of conquerors: ‘taqizza’ or ‘mudarah’ — the deception towards unbelievers, in the Sunni Islam also known as ‘kutman’ — the hiding of one’s own position. Sunni Muslims use their diaspora to deceive. It is seen as a legitimate means of deceiving unbelievers. This particular behavior is called ‘iham’ — the deception towards unbelievers. From the word ‘kutman’ comes in French the word ‘Catimini’ — secretiveness.

Governments, authorities, institutions and the media of (not yet) Islamic States refuse to see the Islamic declaration of war and to meet it appropriately.

The Burkini is a visible sign of this declaration of war.