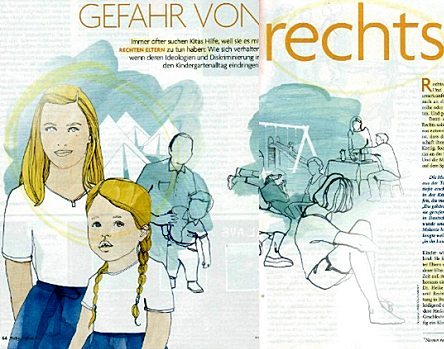 As Thilo Sarrazin famously pointed out, Germany is in the process of abolishing itself.

The primary engine of that abolition is the importation of millions of people who are the very antithesis of Germans — not blond, not blue-eyed, not Christians, not intelligent, and not interested in behaving lawfully. Running in parallel to this process is a systematic deconstruction of German-ness, of the Germans as a people and a culture. All the characteristics related to being German must be deprecated, denigrated, stigmatized, and ultimately eradicated.

The following video and essay describe an article in a health magazine that is distributed gratis in German pharmacies. It advises parents and educators on strategies for detecting the possible presence of right-wing tendencies in the home environment of children who attend kindergarten. Do the kids’ parents cut the American labels off their clothes? Are they too quiet? Too obedient? Do the girls wear their hair in braids? All these characteristics may be signs of right-wing extremism in the home.

The sardonic essay below about the same article is from Roland Tichy’s website, and was also translated by Nash Montana:

And how blond is your Nazi kid?

Alarm: “Children of right-wing parents aren’t necessarily different from kids of other parents. Sometimes they are only be noticeable after quite some time, for instance because they are very quiet or obedient.”

First and foremost, a word on my own behalf: Even when, as a journalist, one deals on a daily basis with current topics, that does not mean that one would be automatically indifferent or deadened. On the contrary, the chance that every now and then something will make one’s jaw drop may even increase. Just as is the case in the following wolf-in-sheep’s clothing case.

The sheep here is the widely loved, and almost impossible to surpass in its harmlessness, drug-store newspaper “Baby & Family”. Just who would expect anything else from this little advertisement paper besides placid articles about the lifestyles of parents and toddlers, spiked with all kinds of appropriate remedies for all kinds of baby’s booboos? Including many endearing pictures — graphics and photographs as eye-catchers for the very little and as a gratis grasping reflex for parents and children.

Not! Indeed, in the February 2016 issue one could read something that could not have been more perfidious. And it raised the question of just why probable waves of outrage and indignation of readers have not yet developed into a verbal tsunami, which should just have swept away the responsible editorial staff by now.

Turmoil in the head

On the issue’s front page, an article with the title “turmoil in the tummy” is mentioned. Yes, parents know the problem when number two just doesn’t want to come out and baby can’t sleep. The article, however, would have probably been better titled with “turmoil in the head”.

Title in the magazine: “Danger from the Right”, that Kitas (Kinder Tagesstätte, Children’s Daycare, German and Swiss name for official state-run daycare) more and more often seek help because they have to deal with “right-wing parents”. No, we’re not talking about the bald-headed daddy with a baseball bat, but, so it says: “…it doesn’t always start with the extreme. To be right-wing takes on many forms. The distinction of what is extreme and what’s not is difficult.” But the fact is, it goes on to say “that these attitudes and sentiments originate from the center of society.” And said center of society can precisely be met on the playground or at Kita as well. The editors asking their readers: “How do you handle it when (…) ideologies and discrimination invade into daily kindergarten life?”

You guessed it: this is primarily about ‘these s****y Nazi parents from the middle of society’ and not so much about their poor dogmatized children. Honestly, one has to breathe deeply several times in order to get through reading five thin pages of this Kita-purging process.

Continuing with Baby & Family. Continuing with the “danger from the right”. Continuing with, yes you already guessed it, an “expert” from the Amadeu-Antonio Foundation. No, not the boss Anetta Kahane herself this time, who’s had plenty of Kita experience in DDR-Pankow, but Kahane’s esteemed colleague Heike Radvan, the leader of the “department of gender and right-wing extremism”. (ME: Interesting that they throw together “gender issues” and “right-wing extremism” in one department. I mean, for liberals, those are like two main issues — they at least deserve two separate departments! No?) Frau Radvan explains to the editors of the pharmacy paper: “Children of right-wing parents aren’t necessarily different from children of other parents. Sometimes they are only noticeable after quite some time, for instance because they are very quiet or obedient.” Oh noes, please just see to it that your children are totally ADHD and color their blond hair black — but more about that later.

Braids and long dresses are a Nazi no-no

These children have been trained since infancy to keep their daily life a secret. Please breathe, it’s not going to get better: They wear “maybe certain brands of clothes”, another right-wing extremist specialist explains. There are no fewer than three such specialists in this article. The one mentioned didn’t mean the West-Jeans for sure. Which is a crying shame. The third woman, the graduate social worker Eva Prausner, opines: “Someone who isn’t street-smart might not notice anything.” It’s terrible how she then, as an expert, explained that “meticulously braided hair and long skirts” are such warning signs, and are evidence of right-wing parents. Furthermore: “Children of such parents wouldn’t wear any kinds of American writing on their clothing.”

This is how they carry on, page after page. I need a lot of patience and calmness to tell you, dear reader, more of what makes me want to vomit.

This is DDR 2.0. The federal government wrote on a website conceding the topic: “The aim was educating the child into a ‘socialist personality’. (…) Parents had a hard time defending themselves against this indoctrination. Especially when their children were spending time in day and weekly care. It unfortunately was often a necessity because of work and transit time, and when sparse provisions and lack of services left parents barely any time to take care of their children appropriately. The potential of parents to influence the education of their children was therefore massively limited.”

Is this the DDR? Or Bundesrepublik 2016? How about “integration of children of the Muslim faith?” On the internet site of the kindergarten manual of the prestigious educator Martin Textor, one kindergarten educator says: “Only a few migrant parents come to the familiarization and developmental meetings, or PTA and other parent events. They even revoke the ‘between door and frame’ conversations. (…) We know that in their world, for these parents and their children, their culture and religion, their values and attitudes are completely different from ours.”

But not a word about this in the paper. They’d much rather bloviate about how all these Adolfs and Evas manage to smuggle their quiet and obedient children into Kita, only to then take the Kita scepter into their own hands for the next thousand years: “The parents are pleasant and dedicated. They build personal relationships, and even take positions in the parents’ council,” the sociologist Köttig tells us. Yes, that is very bad indeed. Worse: These devious parents one time even managed to get parents to reject a homosexual educator.

A second colorfully aloof plot — the article wants to be nifty after all — tells us the wretched story of the daughter of a certain right-leaning Melanie. She was a single parent and had no job — yes, one wants to yell “Help!” or just laugh out loud — but anyway, thank God, said Melanie was converted by the educators [the word used is Erzieherinnen, therefore all-female educators]: “A lot of conversations took place with the (single) mother, during which she became more and more insightful.” No, one does not need a lot of fantasy in order to imagine the kinds of conversations that were held.

Well then, anyhow, it’s just good that there wasn’t a Nazi man standing by this woman, because he might have caused this exertion of influence to take a negative course on Melanie and child. Or just imagine, this new green parent model of multiple parents, as suggested by Volker Beck, would already be reality and they would have all come from an East German Nazi commune, like operators of a Lebensborn 2.0. Everything would be hopeless then.

Sure, even the Muslim mother with hijab and traditional family model isn’t so easily convinced like the dumb right-wing Melanie who took out her “frustration and social envy” on these foreigners. “Even if it was only at the kitchen table.” But in the end Melanie apologized very obediently to the mother of a migrant child who had been gravely insulted by slurs overheard at the kitchen table by her good-for-nothing devil child. Hallelujah!

But then, adds the author Julia Lang from Baby & Family, after all: “The story of Melanie is in no way an example for right-wing extremist families. Much more it shows how even just a right-wing attitude can lead to an atmosphere of intolerance and xenophobia.”

The entire article is illustrated (graphics: Claudia Meitert) with women and children with braided blonde hair. Therefore: blonde, stupid, evil. They actually do not leave out a single racist cliché. Such high-quality illustrations, so reprehensibly racist the intentions behind them. And all the while, all these worries and problems of over-crowded Kitas should be taken very seriously. Thousands of underpaid women and a few men struggle daily to take seriously the needs and worries of small children. They work to create a pleasant routine for them away from home that distracts them from the obvious existential problems their parents face everyday.

The politicians demand almost unanimously that a comprehensive integration of hundreds of thousands of newly-immigrated Muslim children into a liberal German society must begin at Kita. It’s a mammoth project for the educators. And now these beleaguered employees should, per request from the drug-store paper Baby & Family, with the help of professionals from the Amadeu Foundation, become experts on right-wing extremism as well, and see if the Nazi daddy has cut off the American label from his kids’ jeans? Good grief, dear Baby & Family editorial staff: All the Chamomile tea in the world wouldn’t be enough for you: Please take Valium. And lots of it.

A note for readers of a certain age, especially the two Marks (Mark H and Mark Spahn):

The image at this top of this post was taken from an illustration accompanying the original German article in the pharmacy newspaper. While I was resizing it and formatting it last night, it kept niggling at me — it reminded me of something. What was it?

Finally I remembered: the trailer for the 1960 movie Village of the Damned, which was based on the novel The Midwich Cuckoos by John Wyndham. Those glowing eyes — they make you do whatever they want!

I saw that trailer when the movie first came out, and I really, really wanted to go see it, but my parents wouldn’t let me. I don’t think I ever saw it, not even when it came out on VHS decades later. But I remember the trailer very well, fifty-six years later.