Maajid Nawaz is a prominent “moderate” or secular Muslim and the founder of the Quilliam Foundation in Britain. In the following video essay Vikram K. Chatterjee analyzes Maajid Nawaaz’s apparent Koran-based strategy when he plays a disturbing audio recording in a London synagogue.

Update: Vikram Chatterjee has cross-posted this at his blog. 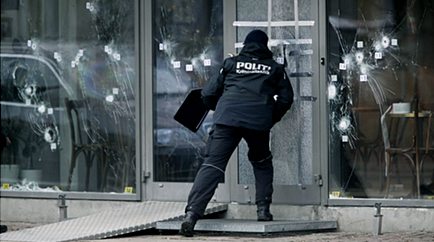 In this video, I explain how Maajid Nawaz deployed a devious and indirect threat to a London synagogue on February 19th, 2015. Keep in mind as you watch the clip that in Muslim belief, Allah causes all things. In Islam, everything that happens because Allah wills it. So when Maajid presses ‘Play’ on his phone, it appears from his point of view that Allah is a miraculously causing the sound of the gunshots to emerge from his phone.

Yet at the same time, Maajid has gained an undeserved reputation as a peaceful “reformer” of Islam, thanks in part to help from his fellow Muslims, who pretend to attack him and say that he’s “in it for the money” etc., as Omer Aziz did on the Sam Harris’ “Waking Up” podcast.

The naïve Infidels in the audience, not realizing that all this back-and-forth sniping between the “reformer” Maajid Nawaz and his “Islamist” critics is just a Good cop/Bad cop routine put on by Muslims to direct Infidel attention towards Maajid the deceiver, so that they accept his claims of friendliness towards Infidels, and thus do not recognize that they are being threatened. They are not expecting that Maajid, behind his facade friendliness and liberalism, is a fanatical Salafi and ISIS operative. Thus, when he plays the recording “Allah came upon them from where they had not expected, and He cast terror into their hearts”, in accordance with the prophecy of Qur’an 59:2.

What to make of our friend, the hapless Douglas Murray? He sits to the left of mad, malevolent Maajid, scratching his head in obvious discomfort, trying, but failing to comprehend that the source of the murderous hatred being blared out on the synagogue’s sound system is sitting right next to him.

Can Murray be alerted to the sinister ways of Maajid Nawaz? Can Sam Harris be alerted? Do any Gates of Vienna readers know how these people can be reached?

How much longer will the devious and sinister ways of mad, malevolent Maajid go unnoticed by his naïve Infidel admirers?

Transcript of the text used in the video:

On February 14, 2015, a panel discussion on freedom of expression featuring Lars Vilks, the Swedish cartoonist famous for his cartoons of Muhammad, and Helle Brix, a Danish writer critical of Islam, was held in the Østerbro neighborhood of Copenhagen, Denmark.

As the discussion was under way, shots rang out.

Audio of the Copenhagen jihad attack on Feb 14, 2015. First published by the BBC.

The shooter was one Omar El Hussein, a young Muslim from Denmark of Arab descent.

After the shooting, El Hussein fled the scene, and later that evening attacked the Great Synagogue, killing volunteer security guard Dan Uzan and wounding two officers of the Danish Security and Intelligence Services.

In the early hours of the next morning, El Hussein was gunned down by Danish police.

The BBC published the audio recording of the attacks on the same day.

Five days later, this chilling audio recording was used by an Islamic supremacist to threaten and terrorize a London synagogue.

The Jews, Christians and other non-Muslims who were in the audience at the Central Synagogue in London that day, were there to attend panel discussion on anti-Semitism.

When the threatening recording was played to them, they probably did not realize that they were being threatened at all. The Islamic supremacist who delivered the threat had taken care to make himself appear to be friendly towards them.

Rather than making this terrorizing threat directly, the Islamic supremacist delivered it in a devious and indirect fashion, fooling the audience into thinking he was only playing the recording in an innocuous, informative manner.

For us to understand what the Islamic supremacist’s true intentions were, we have to know a little something about the Qur’an, about Sura 59, and the context of its revelation to Muhammad.

Only when we understand these details will we be able to detect and comprehend the true intentions that were on display at the Central Synagogue on February 19th, 2015.

According to Islamic tradition, the 59th Sura of the Qur’an, Sura Al-Hashr, “The Exile”, was revealed on the occasion of the deportation of the Jewish tribe, the Banu al-Nadir, from Medina.

The story of its revelation to Muhammad is told in the Sirat Rasul Allah, The Life of the Prophet of Allah, Islam’s canonical biography of Muhammad.

The story begins on p 437 of A. Guillaume’s translation, with the section entitled “THE DEPORTATION OF THE B. AL-NADIR, A.H. 4”…

Muhammad, now a warlord in Medina, asks the Jewish Banu al-Nadir tribe to help pay the blood-price of two men whom were killed by one of Muhammad’s followers. At first, the Banu al-Nadir agree, but as always in Islam, the Jews are portrayed as plotting and scheming against Muhammad and his followers.

Muhammad learns of a plot by the Banu al-Nadir to kill him, and orders his followers to march against them. They are victorious, and expel the Jews from Medina, and take their homes and possessions as their rightful due. Allah rewards them, and reveals the 59th Sura, Al-Hashr “The Exile” to Muhammad.

And in that Sura we read the following, from Qur’an 59:2:

“It is He who expelled the ones who disbelieved among the People of the Scripture from their homes at the First gathering. You did not think they would leave, and they thought that their fortresses would protect them from Allah ; but the decree of Allah came upon them from where they had not expected, and He cast terror into their hearts [so] they destroyed their houses by their [own] hands and the hands of the Believers. So take warning, O people of vision.”

…Allah came upon them from where they had not expected and He cast terror into their hearts… — Qur’an 59:2

So you might just think that this line is going to inspire creative methods of terrorism or military ambushes. However, there are more subtle and devious ways in which this verse can be deployed.

An ambush doesn’t have to be a military ambush. Infidels can be ambushed politically as well.

Infidels can be exposed to threatening or supremacist messages in unexpected ways, and these messages can come from unexpected sources.

From the point of view of the Muslim it will appear as if Quranic prophecy is being fulfilled. The Infidels will be subjected to the terrorizing or supremacist message, and feel its effect, but not realize that they are being threatened, the terrorizing message slipping under their radar undetected.

So, let us take stock of what we have learned:

With these points in mind, let’s look back to Feb. 2015, and consider the following:

As we saw at the beginning of this video, Omar El Hussein carried out two attacks in Copenhagen, Denmark, killing two and wounding five more on February 14, 2015, before being gunned down by Danish police.

It seems quite likely that El Hussein’s martyrdom was on the mind of his brother Muslim, Maajid Nawaz when, five days later, Nawaz strolled into the Central Synagogue in London, to deliver a speech that his hosts thought was demonstrating his opposition to anti-Semitism.

And doubtless too, as he walked into the Jewish house of worship, the story of Muhammad’s triumphant expulsion of the Jewish Banu al-Nadir tribe from Medina, and the Qur’anic verses revealed on that occasion, were on his mind.

From Maajid’s point of view, as he took his seat to deliver his speech, Allah was very much in the room and the spirit of his martyred mujahid brother was with him. For the Jews, Christians and other non-Muslims at the synagogue that day, Allah came upon them from where they had not expected, and He cast terror into their hearts.

What Maajid Nawaz is doing here is using the recording on his phone to allow his brother Muslim, Omar El Hussein, martyred some five days earlier in Copenhagen and now tearing hymens as a shahid in Paradise, to threaten the Jews at the Central Synagogue from beyond the grave.

To Maajid’s ears, the sound of the gunshots echoing across the synagogue’s sound system are the glorious sound of the wrath of Allah, delivered by the hands of His believers, working in unison in this world and the next.

From Maajid’s point of view, it appears as if Allah is reaching down out of the clouds and miraculously causing his martyred mujahid brother to appear in spirit in the synagogue, to show his loyalty to the Ummah and Allah’s Sharia once more by terrorizing Infidels.

In that devious, indirect and otherworldly fashion:

“…Allah came upon them from where they had not expected and He cast terror into their hearts…” — Qur’an 59:2

Vikram K. Chatterjee is a Bengali-American writer and researcher who lives in Texas.