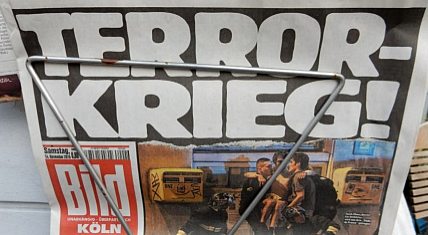 The following essay by Henryk Broder discusses the tendency — and even the necessity — for ordinary people to escape to a dream world in these terrifying times.

Many thanks to JLH for translating this op-ed published last month in Die Welt:

I Understand People Who Deny Reality

The word is, we must get involved with the refugees. All the knife-slashers and axe-swingers, well, they’re just traumatized lone wolves. What do you mean, “must”? Are all our problems now litmus tests?

There are rights that are not guaranteed in any constitution in the world. The right to lie, the right to be cowardly, the right to repress what you don’t want to know.

These types of behavior do not have a good reputation. Even small children learn that they should tell the truth and be courageous. No later than the onset of puberty, when they dream of being in the shoes of Lady Gaga or Justin Timberlake, they are yanked back into reality with pedagogic force, where they are offered part-time employment. Accepting the inevitable counts as courage.

A prize for civil courage can also be awarded posthumously, for example to a Munich citizen who was beaten to death by two youths who resented his wanting to stop them from robbing four other youths.

Wolfgang Schäuble paid tribute to the deceased’s actions as “downright exemplary.” He had “truly earned” the honor. Unfortunately, the hero of the day could not participate in the celebration.

And an actress was honored for her stand “against rightist extremism and anti-Semitism, and for the State of Israel’s right to exist.”

“I Can’t Take it Anymore”

Or a TV moderator who walked along with an AfD demonstration and interviewed several participants. It is said that on such occasions, you must not be quiet and go on your way. You must intervene, show the flag. If not, everything stays the same.

Really? Is there some duty to intervene? Do we have to stand in the path of floods, avalanches and vandals and try to stop them? I used to have a very fixed answer to such questions. Yes, we must!

Today, I am a little more relaxed about it. We can, but we don’t have to. I note that I have more and more understanding for people who don’t want to know what is going on around them. Who do not read newspapers, listen to the news, follow neither the “subjects of the day” nor “today’s journal.”

They say: “It’s too much. I can’t take it any more. I have to close myself off or I’ll go crazy.” Of course they are aware of what is going on around them. But hesitantly, and in small doses. At their workplace, with their parents, or on bowling night. Even second hand.

Repressing the truth is nothing new. We don’t want to admit that we are mortal, that any visit to the gastronomist for some harmless discomfort can end in a finding of cancer.

No one would set foot in an airplane, if it were not possible to block the thought of how absurd it is to fly through the air ten kilometers up, in a metal tube. We find consolation in the improbability of a major accident. And it is calming to note that the chance of dying in a car accident is statistically much greater than of being killed in a terrorist attack.

Recently, we have heard this comment more often than an altar boy hears the Lord’s Prayer. It is true, to be sure, except for those who are in the wrong place at the wrong time. On the promenade in Nice or in a local train near Würzburg.

In the Third Reich, if you were not a Jew, a Communist, a Gypsy, neither gay nor handicapped, and were always sure to give the “Heil Hitler” salute, the chances of scalding your finger when brewing coffee were certainly greater than of being sent to a concentration camp. And those it happened to anyway thought that God or at least the Red Cross would come to their aid.

Human attitudes are determined not by hope, but by the negation of reality through a fiction. As the old joke goes, the person bent on suicide who jumps off a high-rise building says, when half way down: “So far, it’s going well.”

In real life, it is the chancellor who — faced with the chaos her fateful decision has caused — is capable only of clinging to her solution: “We can do it!” It is as if the captain of the Titanic had cried: “My course was correct! The iceberg wasn’t paying attention!”

The Advanced School of Reality Transmutation

And since this is not a play that can be rewritten with a finale that fits the mood of the audience, it is necessary to conjure up a magic formula to make sense of senselessness. This formula is: We are not dealing with a crisis, but with “a litmus test of historic proportions” — so it is a positive thing which brings progress, a kind of final exam for all of us.

We should be thankful to fate or providence or whom- or whatever we are always grateful to, that such a trial has been laid upon us. The joy at “suddenly being gifted with people” with whom we must negotiate “coexistence anew every day,” must not be spoiled by any niggling questions about whether we wanted that. “So everyone must go along and accept the changes.”

That is how the new Jacobinism talks. Everyone must. And if anyone refuses, we will not recognize their civil courage, but force them to accept the changes. For the good of society, and for their own good. Houellebecq[1] calls that “submission.”

There is a psychological term for the technique of reversing a situation seen as negative into its opposite. I suspect it is a kind of hypnosis — the high art of reality transmogrification.

Where Does Displacement Begin, and Where Does it End?

By incessant repetition, you can get them to believe that all the ax-wielders and knife-stabbers we have been gifted with are lone wolves, self-radicalized in the blink of an eye — flexible people with psychological problems who were once traumatized. And when it comes to the deadly, relevant act, part of the blame can be shifted to the victim, who failed the litmus test.

If it goes on like this with lone wolves carrying diverse defensive weapons made in Solingen[2], the phrase “lone wolf” has a chance to be chosen as the “word of the year.” The jury of the Society for German Language could also use this occasion to clarify where “displacement” begins and where it ends.

Does it make a difference whether an incurably sick person does not wish to know his condition, or whether a society refuses to recognize that its days are numbered? Could there be a proper life within the false one?

A few days ago, Pope Francis said that he considered it wrong “to equate Islam with violence.” Almost every religion, according to him, has “a small group of fundamentalists,” including Christians. “This one kills his lover, while that one kills his step-mother, and they are all baptized Christians.” That’s one way to look at it.

The Pope’s argument would be more convincing if he had also mentioned the last time a group of radical Christians had attacked a girls’ school, caused a bloodbath in an airport or stoned an adulteress to death. Baptism does not protect anyone from stupidity. Not even God’s representative on earth.

19 thoughts on “I Understand People Who Deny Reality”