Britain, Sweden, and Germany are vying with each other to see who can spiral down the multicultural drain the fastest. It’s hard to tell which one is ahead — every time Sweden comes up with some new monstrosity, Germany pushes ahead with its own politically correct absurdity. And then the UK puts someone new on trial for “hate speech”.

As far as I can determine, Britain leads the Western world in the number of hate-speech prosecutions per capita. More British people are fitted up, hauled before a judge, and bunged into chokey than in any other supposedly free country. Tommy Robinson’s case is the most well-known, but it’s important to remember that there are many, many others. 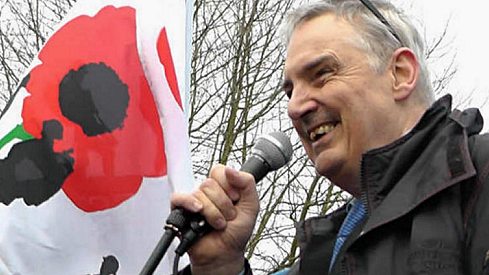 Tim Burton of Liberty GB has already been through the multicultural mill, as reported here two and a half years ago. But the Crown Prosecution Service was evidently disappointed with his acquittal, and has decided to have another go at him for “Racially/Religiously Aggravated Harassment”.

Here’s the report from Liberty GB. There’s a donate button there — please considered clicking it to help Tim out:

Freedom of Speech under Attack — Again

Long-time supporters of Liberty GB will recall that memorable day just over two years ago when, in a rare moment of sanity afforded by the British criminal justice system, freedom of speech was upheld at Birmingham Magistrates Court. On Tuesday 8th April 2014, Tim Burton of Liberty GB was acquitted of unjust and trumped-up charges of Racially Aggravated Harassment. These charges resulted from several innocuous tweets that had been sent to the infamous Mendacious Grievance-Mongering Taqiyya-Artist-In-Chief, Fiyaz Mughal of Tell Mama UK.

However, freedom of speech is once again under threat, as Fiyaz Mughal — ‘Old Fizzy Bollocks’ as he is currently known in the public domain — has persuaded the Metropolitan Police (via the Crown Prosecution Service) to pursue more charges of Racially/ Religiously Aggravated Harassment against Tim, this time for the heinous crime of applying (tongue-in-cheek) for the advertised job of caseworker — in the belly of the beast so to speak — at the offices of Tell Mama UK themselves. Like many of us, Tim felt that Tell Mama UK were doing quite enough damage on their own without an additional caseworker to further threaten our freedoms.

Needless to say, it transpires that the rock-dwelling bottom feeders at Tell Mama UK lack any sense of humour whatsoever, as may be deduced from the extremely heavy-handed and pompous response that emanated from that organisation, which, rather than taking Tim’s email as a bit of light-hearted banter, promptly informed Tim that they were passing his email to the authorities — specifically, the Metropolitan Police.

You may be surprised to learn that Tim was rather taken aback by this response, and he wrote several more emails to Tell Mama UK (in the same light-hearted vein) to say as much. After all, at no time had he written anything that could be construed as causing harassment, nothing to cause fear, terror, alarm or distress, and at no time did he write anything of a persecuting or threatening nature, or anything that could be construed as in any way aggressive. And yet the Crown Prosecution Service subsequently saw fit to authorise charges of harassment, and not just your run-of the mill, everyday harassment either. This was full-blown, red-in-tooth-and-claw, Racially/ Religiously Aggravated Harassment, the kind of harassment charge that strikes fear into the most stalwart heart and is capable of making strong men tremble in their boots.

Because, make no mistake, conviction on this charge carries with it a substantial jail sentence and/ or a hefty fine. Contrast all this with the treatment of Tim by the Crown Prosecution Service last year, when the CPS refused to press charges against a gang of Muslims who had assaulted Tim in the street — in front of a witness — as he was campaigning as a Parliamentary Candidate for Liberty GB in the 2015 General Election. On that occasion Tim’s campaign materials were stolen and he was left badly shaken up. Even though the perpetrators were identified by the police, the CPS stated in writing that prosecution would “not be in the public interest”.

One has to wonder whether Fiyaz Mughal (who sits on the board of at least one panel actually advising the Crown Prosecution Service) has abused his authority by exerting undue influence on the CPS to get them to authorise the unjust charges of Racially/ Religiously Aggravated Harassment against Tim in both 2014 and now in 2016. Whatever the circumstances may be, Tim is now faced with the prospect of appearing before Westminster Magistrates Court in London for a preliminary hearing on 6th October. The trial itself will be scheduled for a later date and we call on all those who love freedom — and who want to see the principles of Freedom of Speech upheld — to support Tim in any way they can. In addition, if you are able to donate in any way, large or small, to Tim’s legal defence fund, please do so here (secure payment via PayPal [see the post at Liberty GB for the button with the link]).

We trust and hope that Tim will triumph once again against this unjust persecution; however success cannot be guaranteed in the face of a corrupt and convoluted criminal justice system which has been infiltrated over many years by a bunch of treasonous fifth column weasels. Please be assured that your kind support will be greatly appreciated in this case, and Tim will respond personally to every single gesture of support. Thank you.