There’s been a lot of discussion recently about declining fertility rates in the West. The aging of Western populations — along with the continuing fecundity of the Third World — generates an osmotic pressure that inexorably sucks masses of illiterate immigrants, most of them Muslims, through the increasingly porous membranes of Western societies.

The Wikipedia article on fertility rates features three tables of data from three different sources. I used the figures supplied for 2016 by the Population Reference Bureau, which were similar to those provided by the World Bank, but somewhat higher than the data in the CIA World Factbook. 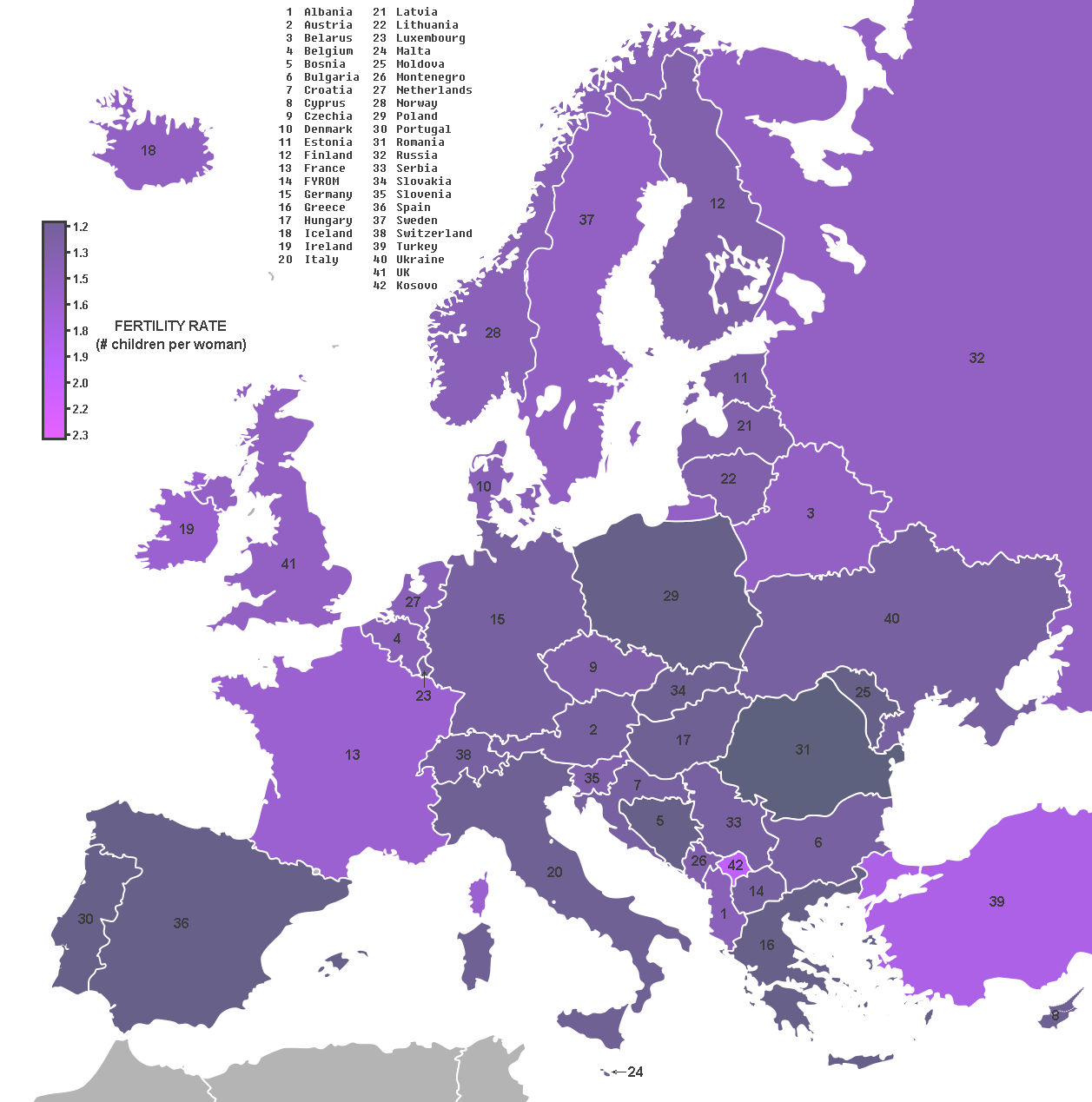 The map above shows the fertility rates for European countries, including Russia and Turkey (which is relevant because it still has a European toehold in Constantinople).

The replacement fertility rate — the TFR under which a population will exactly reproduce itself and remain stable — is about 2.1 children per woman. Of the countries shown on the map, only two — Kosovo and Turkey — are at or above replacement rate. Romania is at the bottom with 1.2, and the average of the rest is between 1.5 and 1.6.

Analyzing these figures is complicated by the increasing numbers of Third-World immigrants and their descendants in European countries. Ideological imperatives prevent most countries from including ethnicity when collecting such data, so it’s difficult to determine how much of the higher fertility rate of, say, France is due to the substantial proportion of Muslims being sustained by a generous welfare system. The same might be said of Britain, Sweden, Belgium, and the Netherlands. I suspect the underlying average rate for white Europeans in those countries is closer to 1.4 or 1.5, as we see in much of Central Europe.

Within ten years or so it will be all but impossible to gather reliable fertility data on white Western Europeans, given the ideological blinders and the skewed statistics generated by the newly-arrived fecund ethnicities.

The decline in the fertility rate is similar in all the other developed nations of the world. I’ve included two tables of global data at the bottom of this post, one in descending order by fertility rate and the other alphabetical. Ethnic Europeans are not the only ones failing to procreate — Japan, China, Thailand, El Salvador, and Costa Rica are all below replacement rate. Among Muslim countries, Iran, Qatar, the UAE, Malaysia, and Lebanon have rates under 2.1.

The highest rates are found in Africa — the most destitute countries in the world. Of the higher rates outside of Africa, Afghanistan and Yemen are prominent on the list. The bulk of these people are Muslims, and most of the new arrivals in Europe come from these countries.

The current situation obviously cannot continue indefinitely. We don’t know whether fertility rates among whites in the West will ever bottom out and rebound; there are simply no historical precedents. However, as long as Western countries maintain their current welfare states — and there’s no sign of any reduction in the enthusiasm for them — young people will have to pay an increasingly higher portion of their wealth in taxes to support an increasingly elderly population, which will depress their countries’ fertility even further.

Perhaps we will end up with thinly-populated wealthy countries whose prosperity is maintained by sophisticated robotics and defended by nuclear weapons.

Or, as seems more likely, we will be gradually replaced by the “brown” people currently pouring in. When they become predominant in the population, their inherited intellectual capabilities will preclude the maintenance of any sophisticated robotics, and their skills and/or work ethic will not provide the level of wealth to which their host countries had previously been accustomed.

What will the West look like at that point? The only thing we can say with assurance is that there won’t be all that many white people left.

With a fertility rate of 3.1, Israel is an exception to the general trend in the West. It’s hard to tell how much of that fertility is based on the Israeli Arab population (“Palestine” is listed separately, and has a rate of 4.1). However, according to anecdotal reports, the Hasidim tend to have very large families.