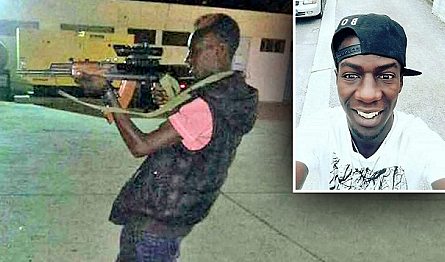 For the past week or two there have been demonstrations and unrest in the German city of Bautzen concerning the presence of migrants in the corn market, the central gathering place in the town. The trouble was started by the “refugees”, but this time the native Germans fought back, and mounted demonstrations against all the cultural enrichment. This, needless to say, caused them to be branded as “neo-Nazis” by the media.

Below is a video report on Bautzen from Spiegel, a progressive German media outlet. Many thanks to Nash Montana for the translation, and to Vlad Tepes for the subtitling:

The following news report about the ringleader of the asylum seekers, also translated by Nash Montana, is from the German tabloid Bild, which is somewhat less progressive than Spiegel:

This is the leader of the young refugees

The photo of the armed young man was cause enough for the police in Saxony to pay attention. It shows Mohamed Youssef T. (20). BILD has learned that he was the ringleader during the riots in Bautzen in the past few weeks.

T. calls himself “King Abode”, and he sees himself as the leader of the young unaccompanied minor refugees (UMA’s) in this Saxon city. Now he speaks with BILD.

“I fled Libya when I was 17 years old”, he says. His father and his brother died, they were rebels in the fight against Muammar al-Gaddafi. He barely escaped: “I was shot at when I was 15.” In the boat, with 180 other refugees, he crossed the Mediterranean, according to his own account, and that is how he came to Bautzen as a refugee.

Did the asylum seeker and refugee incite violence? The Libyan plays down the issue: “I see myself as a protector of my friends. We call them the mafia, because all they do is get in trouble. They drink and steal, a lot of stress. I don’t want to have anything to do with that. I just want my peace.”

T. likes to pose with cool clothes. He receives 320 Euros per month here.

And the picture with the weapon?

Multiple Bautzen people reported it to the police because they saw a picture of the refugee on the internet. That’s why his room was searched on September 7. But nothing was found. Mohamed Youssef T. says that the picture is from back in Libya. “That was just normal there, everybody had a weapon. But for me this is the past, I don’t want to touch another weapon.”

He says he would love to go back to his home country. “There I had my family, my motorcycle, and my own room. That was a lot nicer.” But the political situation seems way too dangerous to him still. But in Germany he has too much “trouble with the Nazis because of the color of my skin.”

Who is “King Abode”? Perpetrator or victim?

He has been deemed aggressive. A video shows him wildly beating on a metal door; a photo shows how he was arrested after he attacked counter-demonstrators at a leftist demonstration he participated in.

One asylum home employee said to BILD: “We have asked the police to have a closer look at Abode. We are afraid that he is a bad influence on the other refugees.”

10 thoughts on “Cultural Enrichment Boils Over in Bautzen”