Note: This post was a “sticky” feature, and was on top for a couple of days. Scroll down for more recent material, including the news feeds.

A few days ago I stumbled across a batch of statistical data on European migration that has been uploaded to the European Commission’s official statistics website, EuroStat. The website has made the data available in .TSV format, which means it can easily be imported into Excel or an Access database.

The site provided me with migration statistics, in terms of asylum applications filed, for the last few years. A comparison by year looked promising — from year to year you can see the German figure double, then double again, and then in 2015 reach a stratospheric level. But that type of analysis is time-consuming, so instead I decided to gather some additional data elements to line up with the asylum applications for 2015 — the year when the Great European Migration Crisis began.

Wikipedia provided useful tables of population and Gross Domestic Product (GDP) for European countries. The GDP amounts I used were from 2013, because that was the most recent year for which complete figures were available. That gave me three variables that could be compared with one another and displayed on color-coded maps.

One of the most interesting statistics available for examination was the number of migrants per capita in the various European countries. I thought I knew which country would be #1, above Germany even: Sweden. But when I collated the results, I was in for a surprise.

Let’s start out with the demographics. Here’s a map of Europe color-coded for population. Rather than label the countries with their names — which would be time-consuming, and difficult for tiny countries such as Luxembourg, Malta, Montenegro, etc. — I numbered them and provided a key at the top. The greyed-out countries are the ones for which data were not available; it seems the EuroStat agency only collects figures for the Schengen Area. I left out Liechtenstein, since it was really too small to represent.

The countries with the most intense blue have the largest populations. Germany, of course, is #1: 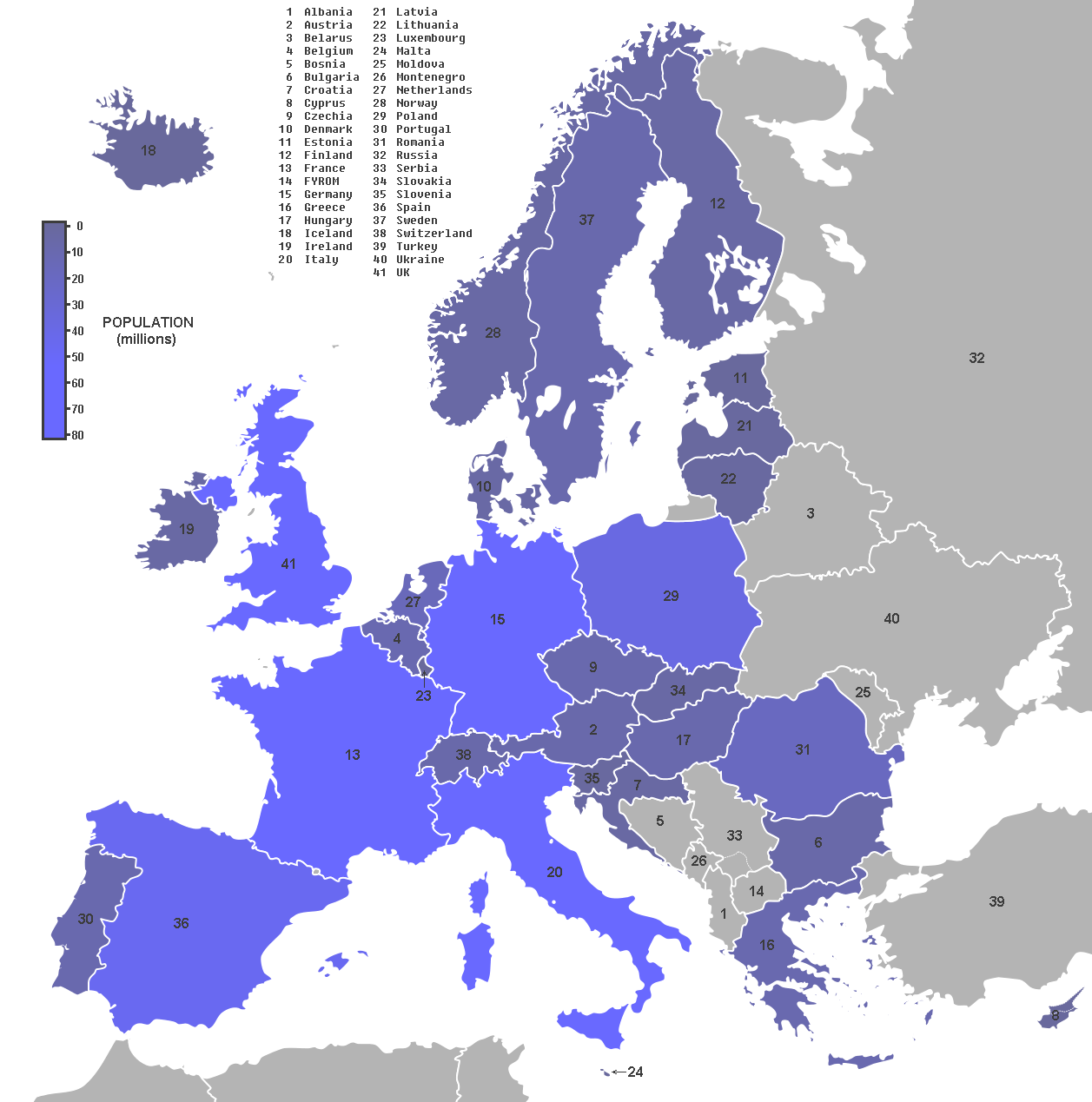 And here’s a list of the top ten most populous countries, in descending order: 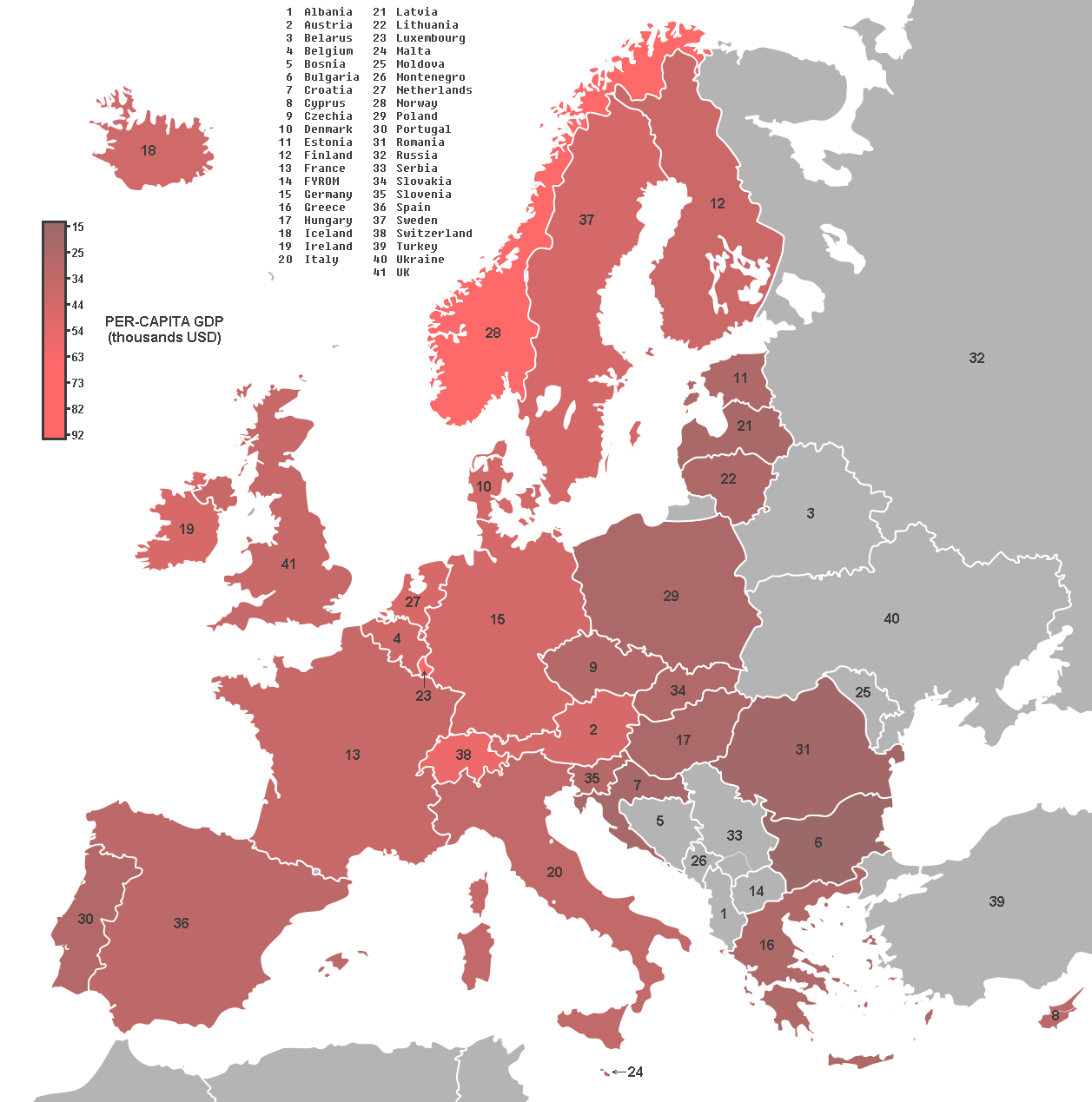 This time Luxembourg heads the list, followed by Norway and Switzerland. Despite its being such an economic powerhouse, Germany is all the way down at #8:

Our third variable is migration, as measured by the number of initial asylum applications. The countries with the most immigrants are the greenest ones on the map: 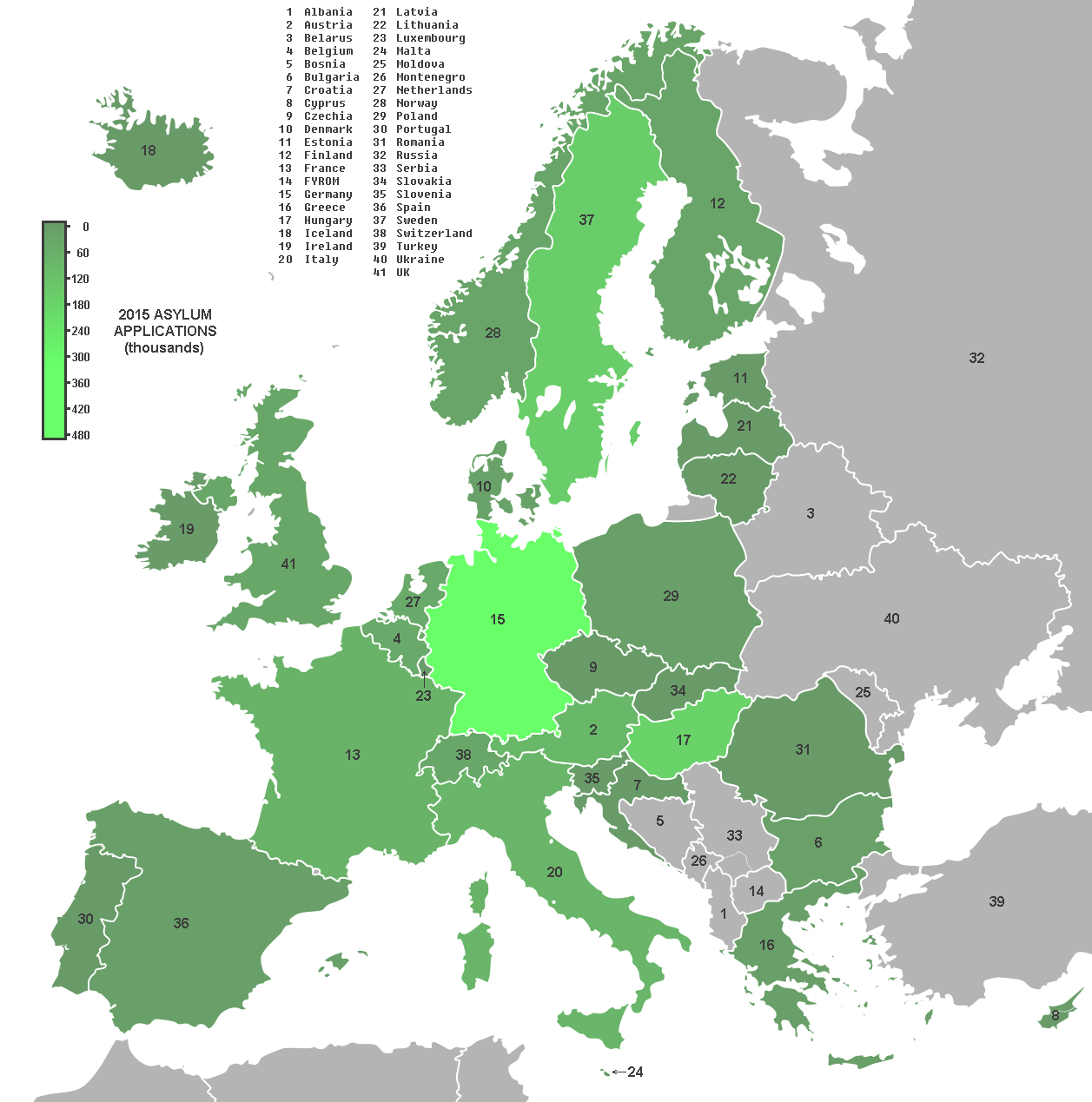 As expected, Germany is at the top of the list, with almost half a million initial asylum applications. But notice that Hungary is #2, ahead of Sweden and Austria:

And this is where it gets surprising: Sweden is not #1 in this list: 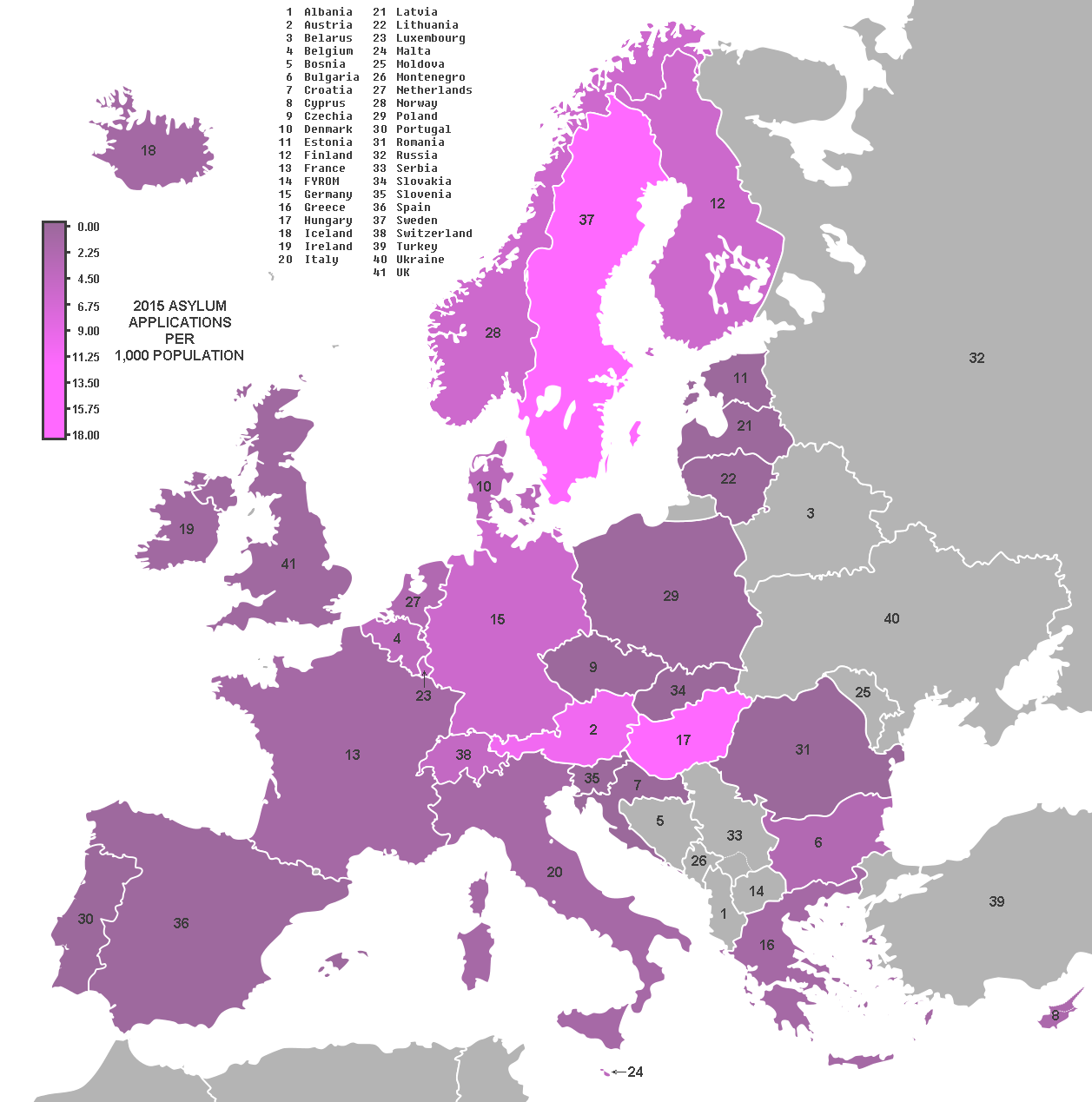 That’s right: Hungary heads the list, with almost 18 asylum applications for every 1,000 residents. Sweden is second with just under 17. Germany is #6, after Austria, Norway, and Finland. It processed slightly less than six applications per thousand of population — that’s less than a third of the number processed by Hungary:

But it gets even more interesting when we look at the relative wealth of the countries with the greatest per-capita figures for migrants. Hungary has just slightly more than half the per-capita GDP of Germany, which means that processing all those migrants really hurts, financially speaking.

In order to look at the migrant load relative to wealth, I divided the GDP for the country by the number of asylum applicants. To get an intuitive feel for these numbers, think of the GDP as the country’s bank balance, which means the figure represents the maximum amount that can be spent on each migrant. Rich countries can spend more, obviously, but a relatively poor country that takes in almost no migrants may have a lot of money available to spend on each of those few culture-enrichers.

In order to make the GDP/migrants differences more visible in the map below, I had to use a logarithmic scale to assign the level of color. The most intense yellow means that the country has the least money to spend per refugee — i.e., the greatest level of hardship: 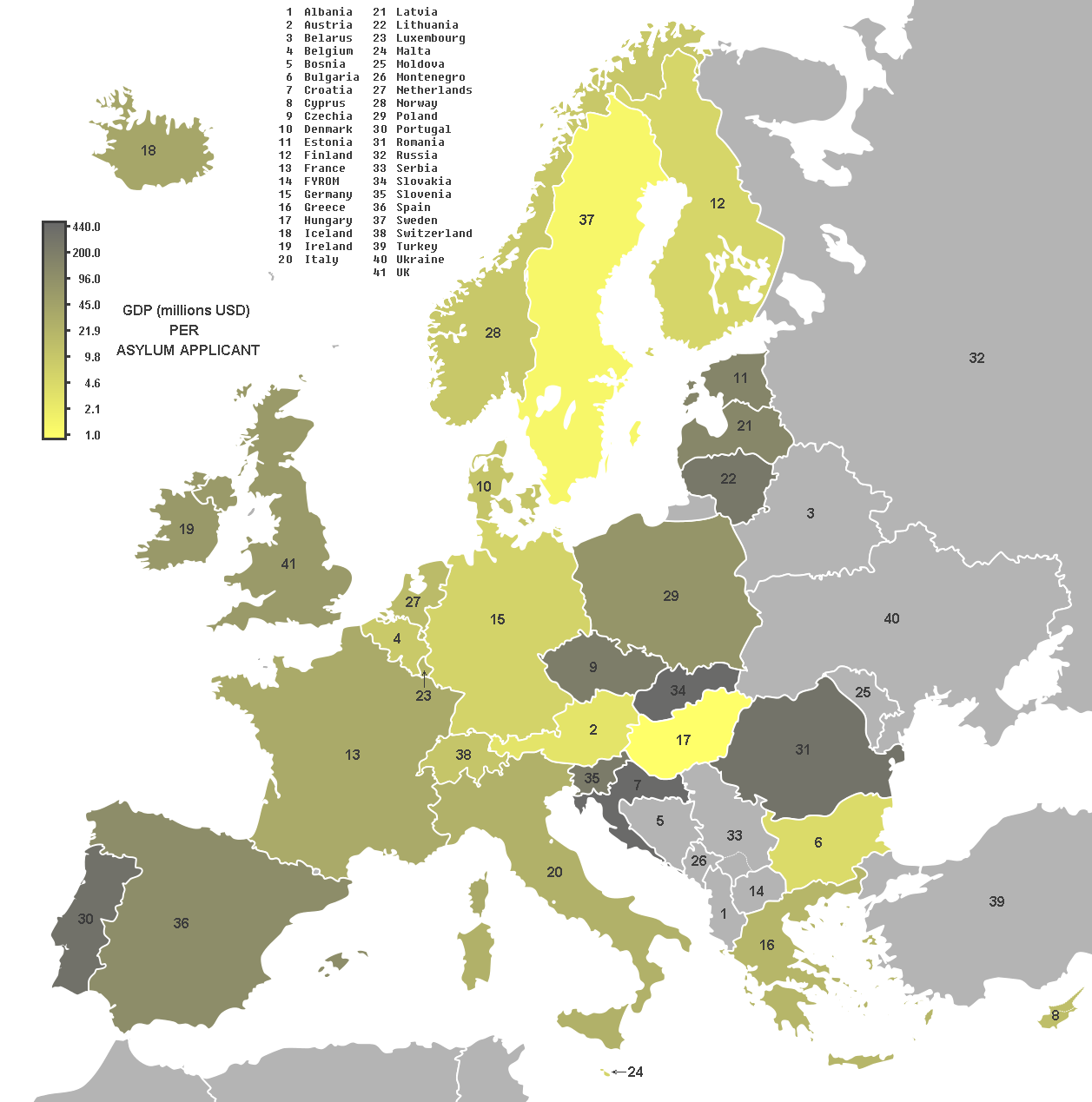 Once again, Hungary tops the list. It has less than half the GDP per migrant than Sweden, which is in second place. Austria, Bulgaria, Finland, and Malta also have less resources than Germany, which has almost six times the resources per migrant as Hungary:

At $1.3 million per migrant, if the situation became much worse, Hungary would be literally unable to pay for the associated costs, even if it taxed all its citizens and corporations at 100% and employed every citizen in the care and feeding of migrants.

No wonder Prime Minister Viktor Orbán has fought so tenaciously against the refugee quotas and other migration-related diktats from Brussels.

For readers who are interested in the raw data, I’ve uploaded the full table in PDF format.

What can and can’t be learned from these numbers

I used the number of asylum applications to measure the amount of migration, because that’s what’s available. Migrants who enter a country without applying are not accounted for by these statistics. By definition, there is no reliable way to count them. Estimating the total number of people entering is very difficult. Aside from using statistical analysis of aerial photos of the flow through border crossings, I can’t think of any way to quantify the actual number of those who arrive.

Furthermore, these numbers don’t tell us the final destination of all those asylum-seekers who were registered when they arrived in the Schengen Area. Anecdotally, we know that the vast majority of them wanted to continue to Germany, Sweden, the Netherlands, and the UK. But how many actually did?

EU rules forbid member states from penning up the arrivals and not allowing them free movement (although Hungary seems to be ignoring those rules now). Once the refugees went through the crossings and filed the paperwork, they were able to disappear. So where are they now? Berlin? Rotterdam? Malmö? No one can say for sure.

But consider this: almost all the migrants who entered Hungary and applied for asylum had passed through Greece, which is also in the Schengen Area. Yet Greece only registered about 13,000 asylum applications — somewhat over 7% of the number that Hungary recorded.

Schengen rules require the first country that a migrant enters record his asylum application and process it. But Greece didn’t do that. Neither did a lot of the other poorer Schengen countries. They just waved the migrants through to the next country along the route to Berlin.

They broke the rules because that’s what they were instructed to do by Brussels. The Schengen rules were to be ignored so that the migrants might pass as swiftly as possible to Austria, Germany, the Netherlands, and Sweden.

The Hungarian government, to its credit, insisted on following the letter of the Schengen law. They stopped the migrants from proceeding until they had filed asylum applications and had them processed. And those who did not qualify for asylum (Moroccans, for example) were slated for deportation.

Mr. Orbán’s punctiliousness did not sit well with Brussels and Berlin. The powers that be in Brussels — with the United States, George Soros, and the whole NWO crowd glowering behind them — ratcheted up the pressure on Hungary until it was forced to allow the new arrivals to proceed without registering.

As a result, there will be far fewer applications for asylum in Hungary this year. Which is a good thing — if events had continued in the same direction, Hungary would have been destroyed.

Which was not the intended outcome — the intention is to destroy Germany, France, the Netherlands, and Britain, the power houses of the EU.

That, in a nutshell, is why Hungary processed 177,000 asylum applications last year. The country was hit hard by the “refugee” crisis, and Viktor Orbán took measures to stanch the bleeding.

Sweden and Germany took big hits, too. But the difference is that they asked for it. They invited in the refugees. They begged them to come in.

Sweden started even before Germany. Years ago, not long after the “Arab Spring” hit Syria, the Swedish government announced that it would take in any Syrians who wanted to escape the war and come to Sweden. First under Prime Minister Fredrik Reinfeldt, and then under Stefan Löfven, the Swedes solicited more and more cultural enrichment from the Middle East, leaving the country in the sorry mess that we see today.

Chancellor Angela Merkel was late to the game. A year ago she threw open the door and invited the entire Third World to come to Germany. Millions of Muslims in the Middle East and Africa accepted her invitation, and with the help of George Soros and other interested NGOs, they set off for Europe.

Hungary just happened to be sitting athwart the easiest and most direct route — the “Balkan Route” — from Lesbos to Neukölln. That’s why all the migrants showed up at the border crossing between Serbia and Hungary. And, because Viktor Orbán insisted on abiding by the rules, that’s why Hungary received 177,000 applications for asylum last year.

There’s no doubt that Mr. Orbán interfered with the globalists’ plans. His fence started a trend: Austria and Slovenia began constructing their own fences. The Balkan Route has now been all but closed off. As a result, if the fever-swamp rumors are true, Germany has resorted to flying in the migrants on chartered jets in the dead of night, so that Angela Merkel can get her desired fix of cultural enrichment.

How long can Hungary hold out against the arrayed power of the entire New World Order? If Donald Trump is defeated in November, and President Hillary takes office, the pressure may become unbearable. If he fails to comply with the ukases emanating from Brussels, what will become of Viktor Orbán then?

Well… It’s possible that he may accidentally fall out of a high window, in the Czech tradition. Or he may commit suicide by shooting himself in the back two or three times. Who can say?

The Hungarians are caught between a rock and a hard place. May God help them.