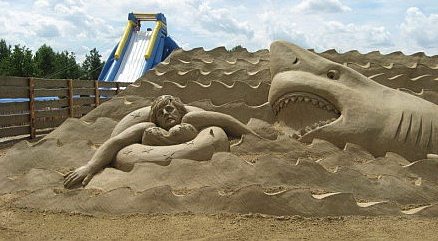 How much criticism of Chancellor Angela Merkel is allowed in Germany?

That question was raised by, of all things, a sand sculpture at an amusement park near Berlin. The sculpture was originally a mild political jibe at the chancellor, but has since been sanitized. It’s not clear whether the change was due to censorship or self-censorship.

Lèse Majesté at the Amusement Park

How much criticism does the Merkel regime tolerate? How much criticism is democratically legitimate? When Böhmermann wrote his sarcastic poem against Erdogan, most people were of the opinion that this should be allowed in the realm of satire. Sentiment was more on Böhmermann’s side than on the reviled Sultan’s. And after the poem came out, the Turk was ridiculed for his lack of humor and his small minded petulance. So much for Erdogan. But what does it look like with Merkel? Can one make such crude jokes about her? 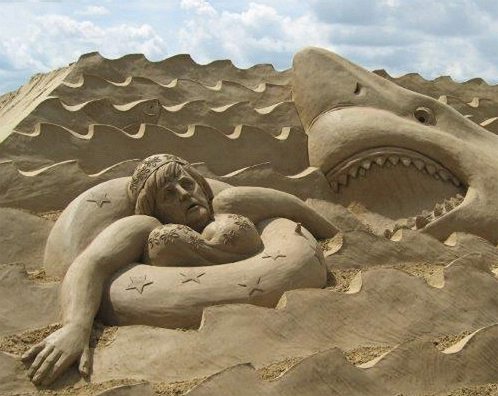 One of our readers visited the amusement park “Karl’s Erlebnis Dorf” in Eistal near Berlin on July 1. There he discovered a 20-meter-wide and four-meter-high novel sand sculpture, and he took a few pictures in order to feast on the visuals later on. An artist had modeled Angela Merkel in a life-preserver, threatened by a shark. Not exactly spectacular, but very funny and with quite a clever political undertone. 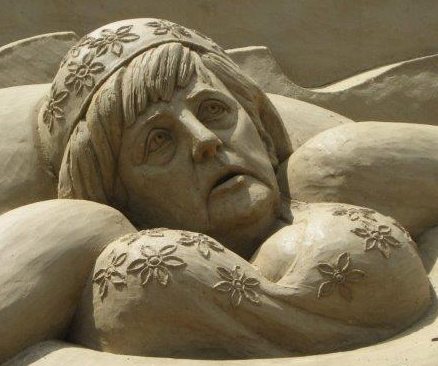 Recently our reader returned there with his family, and he told us about his visit:

We visited for the second time on September 19th, 2016, the huge slide was gone in the meantime, but the sculpture was still there. But what happened? The “drowning person” had gotten a new face!!! When we asked employees it was confirmed to me that apparently there were complaints, but there was no concrete information from whom, nor any details. According to employees the artist is from Russia and he had had to change the sculpture only recently. 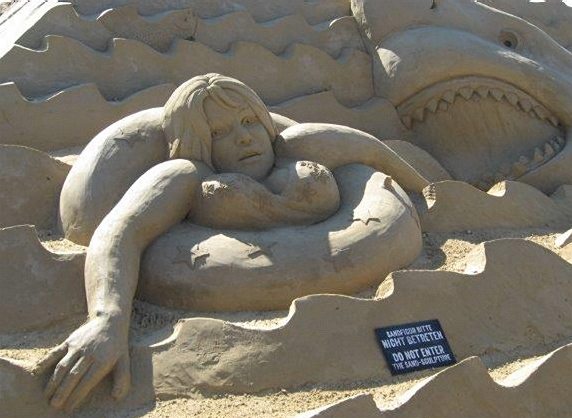 Merkel had been transformed into a young pretty girl, very nice to look at. Our reader was not able to determine what kind of complaints were lodged. Maybe they weren’t even followers of the national front [i.e. the “Grand Coalition”] under the leadership of the CDU who prompted this change. 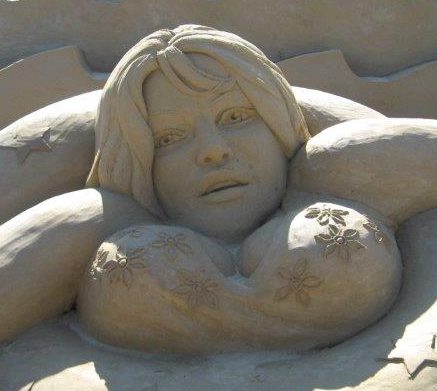 Maybe it was simply the knowledge that something like that just wouldn’t do, and only a small prod was necessary to cause the change. It’s only questionable whether a “refugees welcome” sculpture would have been changed in the same way; after all, that slogan stands for the systematic violation of our basic constitutional law and other agreements and treaties. The Russian artist, 37-year-old Pavel Mylnikov, would probably have been canonized and additionally cast in bronze.

Here it was enough to retain the status quo and to protect Merkel from further criticism. The most efficient and effective way with which Germans can still be impressed was added: 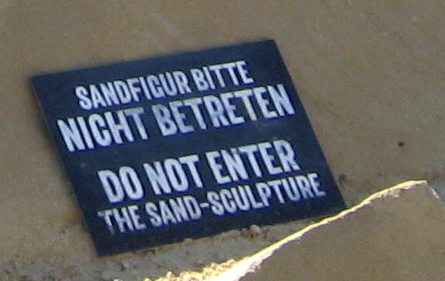 “No trespassing” says a sign now in front of the harmless figure. And with that it is clear that Merkel cannot be joked about, just like Honecker or Kim Jong-un or any other ideological cousin.

13 thoughts on “Angie and the Shark”