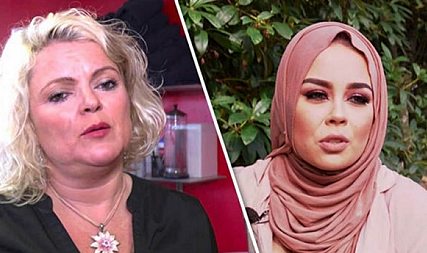 Merete Hodne is a Norwegian hairdresser who has been making headlines for the past couple of weeks for her refusal to color the hair of a Muslima named Malika Bayan (an ethnic Norwegian revert, if I’m not mistaken).

Ms. Hodne says the Muslim headscarf is a totalitarian symbol of “evil”. She refused to pay a fine for “religious discrimination”, which meant that her case went to trial. The story is getting a surprising amount of play in the Norwegian media, and the rest of Scandinavia.

It’s easy to see that Ms. Hodne was set up. She was well-known as an outspoken “Islamophobe”, and it’s no coincidence that the Muslim community singled her out to serve as an example pour encourager les autres.

Below is an article that was published on Monday in the Danish tabloid Ekstrabladet. Many thanks to Tania G. for the translation:

Fierce debate: Why didn’t she just go to another hairdresser?

A well-known Norwegian critic of Islam was fined 10,000 kroner today for refusing to color a hijab-clad Muslim convert’s hair in her hair salon. The debate is now raging.

“It’s obvious that when a convert wearing a hijab chooses to go to this hairdresser to ask about coloring her hair, there are other motives than those presented in the papers.

“Especially bearing in mind that ‘everyone’ knows this hairdresser, whose opinions and attitudes towards Islam and Islamists are well known.”

Do you think this is a provocation?

This is what Øystein F., wrote in the currently most popular comment in the major Norwegian newspaper VGS Facebook Page about today’s judgment against a hairdresser who is known for not liking Islam:

“That the customer chooses a hair salon for both ladies and gentlemen, where there is the greatest danger that there are men who can see her hair, shows that the whole thing is a pure provocation.”

“I would have gone to another hairdresser”

“That the prosecution cannot see this, nor the judges, is scandalous,” continues Øystein. And Eliza Z., who after her comment also could see herself putting on a hijab – writes: “I am not defending the hairdresser, but if I had been in Malika’s place, I would have gone to another hairdresser.”

“Why make such a big spectacle – there are lots of hairdressers who would have embraced her with joy,” Eliza Z and Ahmad I (who incidentally does not like hijabs) write: “Couldn’t the hairdresser just say she didn’t have time?”

Antiracist center asked her to report the hairdresser

On www.rights.no Hege Storhaug wrote that she, too, suspects the hairdresser case was staged:

“What is also interesting is that it was Antiracist Center who contacted the Norwegian convert and asked her to report the incident.”

“It is therefore very easy to get the feeling that this was staged,” Storhaug wrote.

Hege Storhaug is the Norwegian author of Islam, the 11th Plague.

34 thoughts on “All the Colors of Jihad”