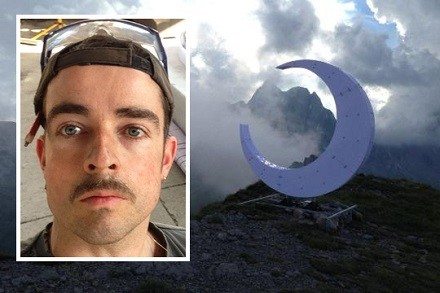 Nowadays the traditional Swiss “summit crosses” — wooden crosses placed on mountain peaks in the Alps — are considered crass, culturally insensitive, and probably racist. But summit crescents — that’s another matter entirely. They’re both inclusive and transgressive. What could be finer?

Without a permit, the Swiss “artist” Christian Meier (photo) mounted a three-meter-tall crescent moon in the Appenzell Alps, which even glows in the dark. As justification for his action, he says that he felt the need to set up an antithesis to the traditional Christian summit crosses. With the help of a helicopter he had the symbol of Islamic oppression transported to the summit of the 2,140 meter mountain. In the village below and among hikers and mountain climbers, anger is stirring. They call this “piece of art”, among other things, an “impertinence” and “bottomless filth”.

The authorities are also not too happy about the luminous foreign object on the mountain. There is concern that the light could not only trigger false alarms, but may also be a danger to rescue workers on the mountain. The Swiss air rescue service has been informed of the non-approved light on the mountain. The crescent moon could also attract gawkers to the location where only experienced mountain climbers can go, and therefore endanger the lives of the inexperienced.

But such thoughts do not go through the heads of these left idiots. “The motor for this project was my joy to provoke. A piece of art has to have a certain interpretative openness to it, so that we can move people to maybe question their views. And when that happens, that makes me happy,” said Meier to the BAZ [Basler Zeitung].

To provoke and — if possible — to replace the values of the homeland with an imperialistic, misogynistic violent ideology, that’s what makes lefties “happy”. To destroy one’s own culture and establish everything foreign is an ideal spreading like cancer among our leftist multicultural betters. [Bunt- und Bessermenschen].

Roland Inauenn, the responsible Canton chairman, does not want to impose a financial penalty on Meier, but he demands that the installation be removed within a week.

The SZ [Süddeutsche Zeitung], which got all excited in their article on Monday about “right wing extremists” (meaning the Identitaire Movement) who had the nerve to replace a sawed-off summit cross with a brand new wooden cross on their own dime, finds the unlawfully installed Islamic symbol not nearly so disgusting as the IB’s cross.

46 thoughts on “A Crescent Moon Over the Alps”