As reported here last night, Geert Wilders, the leader of the Party for Freedom (Partij voor de Vrijheid, PVV) in The Netherlands, has unveiled his party’s program for the upcoming elections. Needless to say, the PVV’s platform has caused controversy both inside and outside The Netherlands. In the following essay, our Dutch correspondent H. Numan provides some of the political context for Mr. Wilders’ proposals. 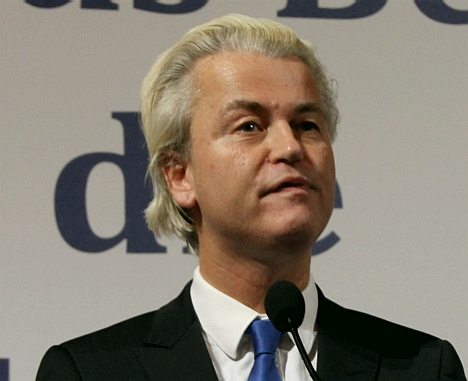 The PVV presents its program

Not only Americans are going to the ballot box soon: in March 2017 so will the Dutch.

One by one political parties are presenting their latest sets of lies, with which they hope to dazzle the dumb or woo the ignorant. The PVV party presented their program a few days ago. It’s not a lot, a mere A4. That’s all. It was enough to stir up the hen house, though. Impossible! The PVV doesn’t want to govern, this is the proof! Left and right are up in arms to fight the evil PVV and all it stands for. Let’s have a look at what the PVV wants, shall we? Have a look at what the Baron posted yesterday for details.

Well, folks. That’s it. If you’re Dutch, this is what the PVV wants. And what just about anyone else doesn’t want. Those in nice comfy jobs, that is. Political, semi-government, non-profit, with-prophet, and don’t forget those nice comfy jobs available in private enterprises. They all don’t want that.

Now, this is their electoral program. Not the koran or a hadith, nor is it chiseled onto a set of stone tablets. It’s what they want to start negotiating from when elected. All across the board righteous people are up in arms about it. Both left and right. This is unconstitutional! You can’t do this without changing the constitution! That will never ever happen!

Nonsense, of course. First of all, nobody knows our constitution. Yes, we have one. That sums up the knowledge we have about that constitution, or grondwet, as it is known in Dutch. It’s not a big deal as the US constitution is. It is also vastly different. Our constitution is not a nice little pamphlet that can be memorized at school. It’s massive complicated legalistic bookwork. Only law students study it. I can absolutely guarantee you that those above up in arms about infringements of that constitution haven’t read any of it, apart from a Wikipedia article or two. As soon as Europeans start yammering about the constitution, beware! It usually is a thinly disguised Godwin.

Now, about that derided PVV program. It’s exactly what the electorate wants. Not the people who make more than three times the average income, but the ones well below. Common folks like you and me. They bear the brunt of what the rich and politically correct have decided. They often live in social housing, and are surrounded and replaced by muslims. If they can, they try to find alternative housing, but usually they can’t. The better-offs have more options. They simply move to a nice house in the suburbs. No muslims there, perhaps a muslim garbage collector twice a week or a muslim ambassador who lives next door.

The rich don’t have to send their kids to a black school. What’s more: they don’t. Mixing cultures is for the morons. Not for them. Femke Halsema was the leader of Green Left, previously known as the CPN, the Dutch Communist Party. She hit the news in 2014 when she moved her kids from a black school to a strictly whites-only school. We don’t have a sign ‘slegs vir blankes’ but ‘school fee: € 500 monthly’ is just as effective.

The same lady has hobby. She loves old-timers. She owns a Mercedes 200 D from 1984. It created an outcry (and very little else!) when it became known. Her super-green party had given her a Toyota Prius, but she would much rather drives around in that smoke-belching chimney. That’s the party chair of the party that has integration and the environment as no 1 issues. Her party bans advanced diesel-powered cars in Utrecht as they cause (debatable) too much pollution.

The most often heard complaint about the PVV is that it’s a populist party. Every democratic party should be a populist party! If they aren’t, they are not democratic. As the chairman of the (former) communist party clearly demonstrates. The Labor party used to be populist, and they still are. If you are a muslim, that is. How are they doing in the polls? They hold currently 30 seats, and have for the entire last year consistently polled below 9. Being populist seems a very good idea to me.

Changing the constitution? What on earth for? You don’t need to change the constitution to close the borders. If the son of an imam calls for the death of infidels in public, does he have freedom of speech for that?

The only item on the list that is somewhat problematic is banning the koran and closing down mosques. To a limited extent, because it’s very simple and easy to ban both. Fire safety, anyone? Lots and lots of mosques were build in derelict buildings, old factory halls and private houses. Methinks building and safety inspectors can find centuries of work there.

We have the Arrest Goeree. The Supreme Court decided that one cannot justify illegal actions (discrimination against gays, in that particular case) based on a religious book. If a preacher calls for the death of infidels, he clearly breaks the law. Nor can that preacher preach in languages the police or the security services cannot understand. There is a provision for that as well in the law. All that needs to be done is merely implement that law.

What about financing? Suppose the Gates of Vienna decides to open a gigantic multi million dollar gate in Washington DC for worshiping. And for building community cohesion, of course. That gate is being financed on a grant from The Numan Foundation in Bangkok, because the Baron barely makes enough to make ends meet. Would the IRS not investigate this? Or the FBI? You can bet your donkey on it! Which they do not if the donor is a rich oil sheikh from Saudi Arabia or Bahrain. Currently a school is sold for 1,7 million euro to a group that’s mainly on the dole. Financing comes from highly disreputable sources. Barely a politicians bats an eyelid.

In fact, GeenStijl has a program called Sheikh Watch, in which they publicly tar and feather mosques, mayors and organizations who invite known hate preachers. What’s more: it works! After publication, more than 90% of proposed hate preachers strangely cancel, have their visa revoked, mayors by sheer coincidence find reasons for a ban, organizations are mysteriously all of a sudden fully booked.

The only point on the list I find a bit difficult is leaving the EU. The Netherlands, just as all the other border countries of Germany are in fact one of the German Bundesländer with their own language and passport. We are all economically tied to Germany. Only when Germany decides to leave, can we all leave. Not a moment before. Still, it’s a very sore issue, and makes it very clear what the PVV thinks about the EU. Nothing wrong with that.

What many readers will notice is that the PVV program appears to be somewhat to the left of Marx. Yes, so it seems. On the right end of the political spectrum that sorry horse has been clubbed to death for over a decade: the PVV is an extreme socialist party in disguise.

Nonsense. The PVV electorate are mainly the lower income and lower-middle income classes. That doesn’t make them automatically socialist. There are plenty of poor people who abhor socialism. The privatization of government services and social programs has caused nothing but hardship for them. Health care prices have quadrupled in the last decade. At the same time, the elderly are being tarred as selfish and egoistic for having saved their money to enjoy in their final years. Yes, you read that correct. Joe the Plumber, who by law must pay a substantial part of his wage for a private pension is now a filthy rich capitalist. He didn’t have any other option, mind you. He couldn’t invest privately, nor not save at all. Since he is a plumber he must, by law, invest a fixed amount of his wages in the plumber’s pension fund. If he can’t pay for this month, he’ll be fined.

For people with a lower income, those ‘social left-wing’ program points are not merely an issue. They are vital for survival. Neither are they or the PVV politically socialist at all. They are conservative. All they want is to get what they have paid for over the years. Incidentally, our national parliament just voted to shift control over our national pension funds to the EU without a debate, or anyone even reading up on it. The members of parliament received notification that the debate was to be held within the next 12 hours. Accompanied by 1000 pages of documentation, so they could prepare themselves.

Is it strange that the PVV is doing so well on the streets today? I think not. It’s a brief, to-the-point document that doesn’t beat around the bush, nor promise the moon. Which is exactly what the other parties are doing. Still waiting for the €1000 pledged by the VVD, which they promised last time.

The PVV gets lot of flak for this very blunt proposal, but I think it’s very clever. If you don’t like it, don’t vote for it. Wilders is still the maestro of Dutch politics!

3 thoughts on “The PVV Presents Its Program”