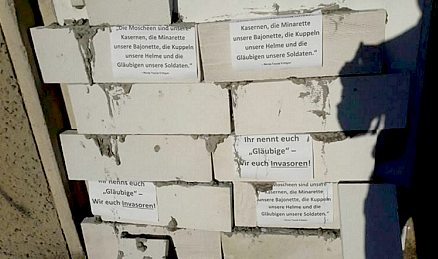 Last week, during the dead of night, someone — possibly heterosexual white-skinned patriarchal racist xenophobic neo-Nazis — bricked up the entrance to a mosque in Germany.

Many thanks to Nash Montana for these two brief translations. First, from Politically Incorrect:

Last week on Thursday night unknown persons cemented shut the entrance to a mosque in Parchim (Mecklenburg-Vorpommern). They attached Erdogan’s quote, “The mosques are our barracks, the minarets our bayonets, the domes our helmets and the believers our soldiers,” as well as the quote: “You call yourselves ‘believers’ — we call you invaders.” The police report from August 28th speaks of “xenophobic slogans”.

Property damage to mosque in Parchim

Rostock — On the night of August 25th, a mosque that is used as a community house in Parchim Westring was damaged. Using aerated concrete, unknown persons cemented the entrance shut of a building that was at the time under construction. Furthermore they left flyers stuck to the meter-high wall on which xenophobic slogans were printed. The criminal police are investigating.

A big thank-you to Vlad Tepes for the title of this post.

12 thoughts on “The Mosque of Amontillado”