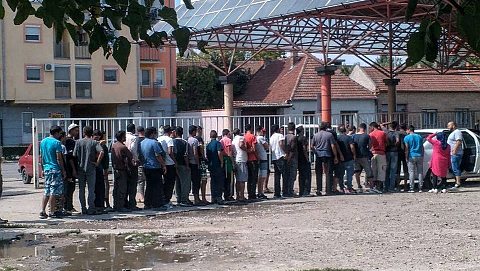 The following report from Serbia describes the plight of an ethnic Hungarian town close to the border with Hungary that has been overrun with “refugees”. CrossWare, who translated the article, includes this explanatory note:

Szabadka is now Serbian territory, but most people there are still Hungarian. That is why they have a Hungarian-language website for local news. Hungary lost this area after the First World War.

This city is close to the border crossing where the last skirmish occurred between the Hungarian police and the Muslim invaders.

The translated article from the DélHír portál:

North Bacska for the last couple of years has been under the weight of the continuous migration. The really massive migration already in its second year and heavily impacts multiple cities including Horgos, Magyarkanizsa, or Szabadka where even inside the populated areas, there are multiple places where migrants are always present. One of them is the bus station in Szabadka where, as the last two years have proven, the illegal invaders show no sign of any kind of integration.

The locals are becoming more and more desperate, and they tried every possible local authority, but they only received empty promises, while the migrants have taken over the area and rule there, doing anything they want to do. One of the neighbor of the bus station told to our reporter about the sort of unfortunate conditions that exist in Szabadka.

They drink, steal, destroy everything, and they litter

“Yesterday evening they were drunk again, around 30 people. They were kicking our fence and banging on the walls,” said one of the local citizens. “We call the police, but then they run away, hide in the doorways, behind trees and bushes. The officers do nothing, just look around, and as soon as they leave the area everything continues: noise and destruction. We’ve called the police numerous times but we always get the same answer: they cannot do anything; their hands are tied and the people should be more patient… So we should watch it patiently as they ruin the whole neighborhood.”

We learned that they push the vehicles parked there into the fence, but the hoods of the cars are being crushed because a bunch of them sit on them or put their stuff on the,. They break off mirrors, because no matter how dirty, stinking and unclean they are, they always take extreme care with their hair, and they move the mirrors for combing. Of course they also constantly try to break into cars if they suspect they have some valuables inside.

The locals also told us that the migrants arbitrarily invaded multiple buildings in the area, starting with an empty store, then later continued with an empty house, and it took the police more than a week to move them out.

Its is an everyday occurrence that they sell the food packages they receive from aid organizations; they approach “customers” close to the milk market. They fight and invade private properties regularly in Szabadka:

“They totally behave like everything is theirs here. They just jump into our garden and steal the fruits. Once we had to grab our bicycle out of a hands of a migrant, and we frequently find human excrement on the porch. We reported this to the police, who gave us the advice to keep the migrant at the location until they arrive, but how can we do that without violence? It also happened that when we caught them in the act, they threw garbage at us because we dared to say something. They constantly insult us; although we do not speak their language, from the gestures and body language we can suspect that they are not kind to us. Finally we could not tolerate a lot of garbage around us so we collected some of the trash they threw into our garden. It was more than 35 garbage bags! But there is no point in cleaning up, because they even throw in their used clothing, since they get brand new clothes from the aid organizations.” — A citizen describes his sad experiences with the migrants’ behavior.

The aid workers look at the destruction and abuse without moving a muscle. They even allow their favorite darlings to commit violent acts. When the locals asked them, “Why not step in and help?”, they just said that is not their problem. 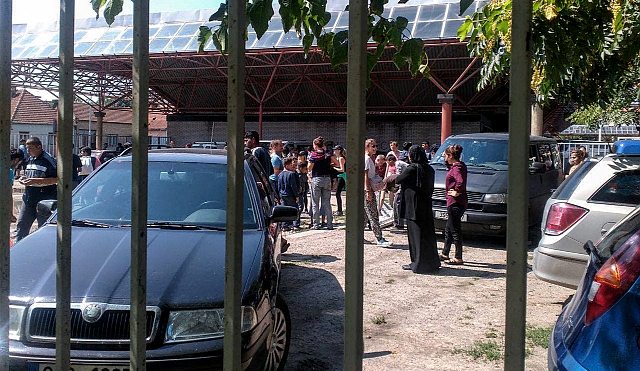 When we asked the aid workers to at least just tell off the migrants when they see them throwing pieces of the aid package they do not like over the fence into the gardens, they gave the same unashamed outrageous response. “That is not their job, and the locals should keep their houses clean,” the locals complained to us.

The cleaners at the bus station are having trouble keeping up with the collection of the garbage. Many times they afraid to do their jobs, because the migrants throw rocks at them.

The people living in the area asked the aid workers to stop handing over packages at the bus station and do this instead in the migrant center, because that is the official location for this purpose. That place would be more fitting for this type of activity. The aid workers haughtily refused and told the locals they do not care. “We asked for their permit, but they never showed it to us, just told they have it. When we called the police they told us some organizations has a permit but there are numerous European and local groups here; it is totally uncontrolled who is a member of what organization and where the packages are coming to. Trucks from Poland, the Czech Republic, Germany and Belgrade come here and everybody just hands out packages. Most of them end up as garbage in the gardens of the neighborhood.”

A citizen from Szabadka told us the aid workers are handing out English-language flyers to the migrants which give tips about what to say to the authorities if they are captured at the border. They get maps marked in green for the border’s more vulnerable points, which means they are aiding and abetting by preparing them for illegal border violations and misleading the authorities.

There is nobody we could turn to

“We tried everything, repeatedly reporting to the authorities, community police, who came out, looked around and told us they cannot do anything. We approached city hall with our problems, too, but they told us they could only do something if Belgrade allow them to, but they are helpless until they get permission from ‘above’,” reported one of the impacted citizen to DélHír (SouthNews).

From the above it is clear that the population of Szabadka suffers the most from the flood of migrants while “big politics” wants to make a decision over the heads of their own citizens, and they do not see the complete failure of integration, which is proven over and over again every day in Szabadka.