Our Israeli correspondent MC has some thoughts on the “refugee” crisis that is currently destroying European civilization.

The so called ‘refugee’ crisis is a crisis of young fit males of military age forcing their way into places they have no right to be, at the behest of people who have no right to invite them, on behalf of people who don’t want them. However I am given to understand that Kurdish females are fighting alongside their menfolk for the right to their own country.

Excuse me if I am cynical.

I hope that if my country were invaded by Wahhabist barbarians I would be fighting back, doing what I could to support the military. As a vet, I can still handle an assault rifle even if I cannot run any more.

I can understand families getting out of the fire zone, but why are the invaders of Europe overwhelmingly young males of military age? Should not they be defending their countries too?

I am suspicious firstly because most are not refugees, and as such, they are illegals: they have crossed more than one (safe) border and have thus lost their refugee status, and as criminals they need to be interned until such time as they volunteer to return, or are forcibly returned.

As for families, they are welcome as temporary residents until they can safely return to their normal place of abode. This should be a zero-sum game. Temporary residents are then welcome to apply for permanent residence through normal legal channels.

In Jordan and Turkey there are refugee camps (concentration camps?) — why are we not building them in Europe? Why are we inflicting the burdens of accommodation and integration on a defenseless public? Is this just plain intimidation, or is there a more sinister goal?

Our leaders, our ‘betters’, want to prove that we are all equal and that ‘diversity’ is a wonderful thing, but where does ‘diversity’ end and cultural saturation begin? Where is the wonderful diversity that ‘white’ culture can bring to ‘brown’ culture?

Melting pots are anti-diversity; they produce a bland stew with no taste whatsoever.

Is this the latest fad and folly of socialist pseudo-science?

When it comes down to it, socialism produces a very ugly grasping society, where one has to scramble for the handouts because there is never enough to go around. The Orwellian pigs can select their favorite victim groups to be more equal and to receive what largesse there is. The rest can await their turn, shut up and pay up.

Of course any dollar we get back from socialism costs us a dollar-fifty or more in taxes because we still have to pay the salaries of the piglets who administer the system, and also pay for those not paying the taxes. Those million migrants are going to cost Europe their weight in euros (paper ones, that is).

Then there is the electoral fraud inherent in keeping a nation of professional spongers and idlers. These are people who see government as the golden goose, not the taxpayers without whom the whole system collapses.

I work indirectly for a huge US company, a company which is getting more and more hamstrung by restrictive legislation, all of which has to be paid for by that same taxpayer. When I started working for another US giant in 1977, we were hamstrung by an antitrust suit, even offshore, but that company was exporting and bringing in foreign currency.

We worked efficiently as highly skilled software developers. We handled the whole application lifecycle and handed over a finished, working product to the users. Now, producing the actual software is a tiny part of the process, for each line of code delivered there must be about 10 pages of documentation and 60 emails and 10 conference calls. The software developer is now at the bottom of this ‘lower-archy’ pile. But she still needs to be highly professional because she still carries the can if it all goes wrong.

Are we trying to make the West fail?

When Jews were in need of a place of safety, the iron doors clanged shut, and the keys rattled in the locks. Even already-issued visas were revoked.

Why are Muslims so different? Is it because Satan created Islam to do away with Judeo-Christianity? If he did, then it has done very, very well. Think about it: Constantine dumped Torah (Early Christians kept Torah, see the Book of Acts), Mohammed dumped the Bible and Darwin dumped God. Three master-strokes…

Most of our politicians can ‘see’ the difference between Muslims and radical Muslims. To me, the difference is not so clear. The Orlando shooter was deemed to be moderate — that is until he demonstrated with an appalling practicality that he was radical. From tiny moderates do murderous jihadists grow.

I would love to see pols who spout:

“This is a war with radical Islam, it’s not a war with Islam,” he said. “Muslims are our partners. The vast, vast majority of Muslims in this country and around the world are moderate, they’re peaceful, they’re tolerant.” (Paul Ryan, Speaker of the House of Representatives).

…actually put their money and their careers where their mouths are, to actually go and live amongst the peaceful and the tolerant moderates as real people have to. To make this statement this pol. has to ignore the reality and believe the fantasy; the fantasy put about by Muslim Brotherhood front groups, liberally laced with largess with which to line legislator’s wallets, and who follow Al-Banna and Qutb and their violent form of fundamentalist Islam. Does something stink in the House of Peace Submission? 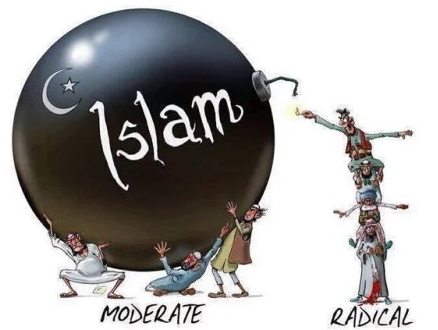 But back to those refugees. The real question is where does the money come from? Those €500 notes, the boats, the outboards and the bribes/fees. I certainly could not afford to be one of those refugees, I could not even afford the lifejacket that gets thrown aside as if it costs nothing…

Also, those rubber boats look purpose-built, they are totally impractical for anything but short sea crossings with an excessive crowd of people. Loaded, and in a running sea they must be dangerous and difficult to handle, and the shape means that turning them into wind would be nigh on impossible.

I find it difficult to believe that there is not a good deal of planning here. It all happens just too slickly. something like this should be totally chaotic, but it is as well-organized as a Normandy landing.

On the Libya routes, one only needs to get outside the territorial limit and hey presto! Along comes the navy or the coast guard to take you the rest of the way. A warship costs about $1,000 or more per yard travelled, more costs, and where is the personal responsibility in all this?

Poor little dead boy posed on the beach — we are fed a meme, a meme of lies. We are told that we are to blame. Nope, not true. We had no part in the decision at all, and yes, it is sad, but place the blame where the blame is due, not where it is politically convenient.

And why do the media try desperately to hide the overwhelming multitude of young men, and only show the few families? Why do they only show the migrants marching, not comfortably on a coach or train, as is the norm of their travel?

In 1975 I was an officer on the Royal Navy ship sent to Beirut to evacuate Westerners. There we were to rendezvous with a USN destroyer on a similar mission. We stopped off in Gibraltar and took on thousands of camp beds, bedding, clothing, washing kits and sanitary items. Then it was 28 knots to Malta for food and perishables, all this prepared in advance.

This took time and planning. Those of us to be on the beach party were armed, and we fused all our compliment of shells ready for war. We expected a none-too-friendly visit from the Syrian air force.

Let me emphasize: This evacuation had to have been planned years in advance; thousands of boats, lifejackets and outboards don’t just appear on the Turkish coastline along with fuel and people to drive them. A considerable logistical exercise underpins the upheaval.

Your governments KNOW this.

“But they are ‘moderate’ Muslims who need our help”.

Where is the red line that demarcates ‘moderate’ Islam from ‘radical’ Islam? Is it the same red line that exists in Syria for chemical and biological weaponry? “There is only ONE Islam,” says a Turkish President who grew up in an Islamic state and has been a Muslim all his life. Islamic terror has nothing to do with Islam, says another President who is supposed to have been born in America but is so ashamed of his past that he obfuscates it, maybe to hide the lies. Which one do YOU believe?

Every Muslim that enters our countries is like an immigrant from an Ebola-riddled country; a toxic time bomb, a pathogenic pariah. The possible Ebola carrier would routinely be separated out of our society, placed in quarantine and repatriated as soon as possible (well, maybe). Only with Islam the risk is a dangerous ‘religion’, not a deadly disease.

So people, let us ask those who tell us that ‘moderate Islam’ is good for us to define their ‘green line’ between moderate Islam and its Koran on the one hand, and extremist Islam and its supposedly different ‘Koran’ on the other. Then let us apply that criterion to the Muslim hordes invading us. Can we safely leave the definition of ‘moderate’ Islam to the White Closet where the super-intelligent thinker can sit and contemplate, and maybe confer with his Social Supremacist Justice Warriors on exactly where to draw this line. A green crayon should be available in the WC toy room next to the golf scorecards.

Then, when it all proves to be futile, we have somebody to blame, somebody whose failure to identify the enemy has already caused hundreds of innocent deaths. Let’s get one thing straight: all the time we in the West fail to understand what all Muslims know to be true — that there is no moderate Islam, nor moderate refugees — more innocent people are going to die in Florida, and more little children be gang raped in Idaho.

And folks, don’t feel left out: It’s coming soon to a ‘moderately peaceful’ location near YOU.