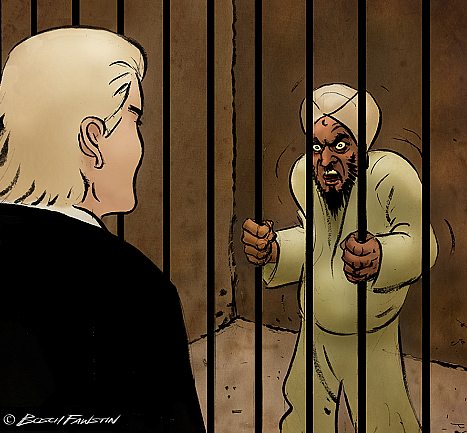 Below are excerpts from the Breitbart article about the new cartoon:

Speaking on the new cartoon, Geert Wilders said: “Bosch Fawstin was raised as a Muslim and personally experienced the atrocities of Islam up close.

“He is one of the biggest heroes of our time because he had the courage to leave Islam.

“I am proud that he made another Mohammed cartoon. It shows Mohammed behind bars and myself being satisfied about locking up the danger.

“The West is facing an existential threat and weak leaders who are not protecting our people. We cannot afford this appeasement policy anymore and have to act today to preserve the freedom of our countries and security of our people.

“We must close our borders for immigrants from Islamic countries, detain jihadists, and de-Islamize our societies, for example by closing mosques and Islamic schools.”