Our Colombian correspondent Diego sends this brief essay in which, as he said in his email, “I decided to gather my thoughts on a couple of topics.”

Note: Diego has chosen to broach a topic (often enclosed these days in triple-nested parenthetics) that frequently attracts irrational and unpleasant responses in the comments. We’ll allow greater latitude than we usually do, because it is, after all, part of the topic. But there is a limit to how much nastiness and vitriol will pass muster, and where that limit is set is entirely at Dymphna’s and my discretion.

Also: If you include a controversial historical/factual assertion in your comment, make sure you source it. Any triple-parenthesis website will not be considered a reputable source. 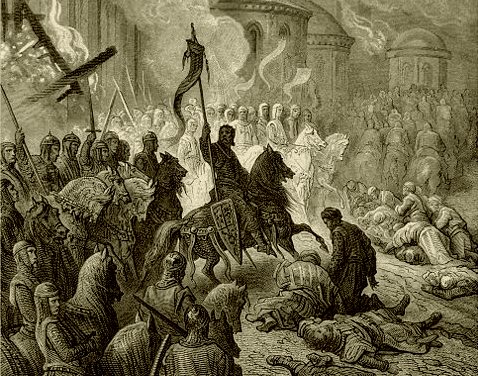 How Do We Defend the West Against 21st-Century Saracens?

I was browsing through the Internet, and found some… interesting pages. But I must say, that I ended with the same situation of a few months ago with the right-wing student magazine in Colombia.

I have always said something when talking to my close friends about Europe. From my outsider point of view, I can see Europe between a rock and a hard place.

I won’t give names of the websites, but it saddens me to a great extent to see the views expressed by these people actually gaining traction. However, we must remember: Man is not a rational creature, and rational arguments are not enough to convince most people.

The sites in question, ultra-conservative Christian pages (from the Roman Catholic and the Orthodox traditions, but open to all Christians) espouse the idea of “Supersessionism”, or the belief that the Christian Church as thoroughly replaced the Jews as God’s Chosen People.

While I normally do not care about such things (I oppose this belief, but that’s beyond the scope of this text) the constant anti-Israel propaganda spouted under the name of a “True Christian” view can be disgusting at times.

Sadly, this is far from the only case. While Colombians tend to not care about what is happening in the rest of the Western World, I have noticed that among the people forming the bulk of the Counterjihad movement, there is a movement towards being anti-Semitic as well, some even going so far as to claim that, just as Europe belongs to Europeans, Jews should “leave Palestine”! Or openly claiming that “Jews are behind the Islamization of Europe”.

I am afraid, my friends, that we — those who can see that Israel and Judaism are taking a lot of fire from the mujahideen that would otherwise be directed towards the West, and who see that Israel and the Jewish people are one of our most important allies with invaluable experience — are a minority.

Don’t misunderstand me: I am certainly glad that people across Europe are discovering their Christian roots, and that slowly but surely more people realize that it is worth fighting for… But I am afraid that at this point, where political change is no longer possible, or where it is too late to make such change into something tangible and meaningful, Europe is picking up the banners, not of Christ nor of Freedom, but of Count Emicho.

As for the burkini ban, I can’t see what the Western authorities are trying to achieve. This ban is nothing but a hypocritical move by an assortment of traitors to give the masses something to talk about. Banning the Burkini is just a political statement, a show of “strength” by governments, that will not really change anything, other than to make many freedom-loving Westerners Islam-sympathizers, at least on this issue.

This is a measure that I think could and should have not been taken, but now that it stands, it should not be repealed.

35 thoughts on “How Do We Defend the West Against 21st-Century Saracens?”