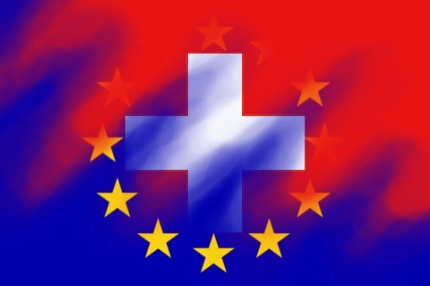 The Gutmenschen of Switzerland have the same globalist ambitions for their country as other progressives in Europe and North America: they want to subjugate it to unaccountable international bodies, giving them veto power over Swiss law and citizens’ initiatives. In particular, they want to bind Switzerland to the legal regime of the European Union, even though it is not an EU member state.

The Swiss People’s Party has launched a new initiative to resist any further erosion of national sovereignty. Many thanks to Ava Lon for translating the article from Le Matin:

UDC [Swiss People’s Party, SVP, also known as the Democratic Union of the Center, is a national-conservative political party in Switzerland] filed on Friday its popular [citizens’] initiative “Swiss law instead of foreign judges”, having gathered 116,09 signatures.[a minimum of 100,000 is required] The party accuses the elites of a “coup” against the people.

According to the Federal Constitution, the Swiss people and the cantons are the supreme legislator of our country, said Christoph Blocher at a press conference in Bern. But the legislative self-determination of Switzerland is constantly being undermined.

The culprits, according to the tribune of the populist right: Parliament, the government, the administration, justice and law professors. “They formed a worrying alliance in order to slyly remove the constitution.”

Their intentions are clear: these groups are seeking to muzzle direct democracy. “This is nothing short of a coup” against the people and the Constitution, accuses former Federal Councillor Christoph Blocher.

The implementation of the initiative on the expulsion of foreign criminals, the initiative on the confinement for life and on the removal of statute of limitations for crimes of pedophilia: all those examples show how judges of Lausanne, through their decisions, violated direct democracy and separation of powers, according to UDC.

But the SVP holds the solution, she says; the popular initiative will correct this dangerous course by giving primacy to Swiss law with respect to international law.

Because “we are convinced sovereignists”, echoed the vice president of the UDC and state councilor in Valais, Oskar Freysinger. The question of the superiority of Swiss law is the mother of all battles, all other issues, including asylum and migration, being linked to it.

The text states that the Confederation and the cantons shall respect international law. But the Federal Constitution is placed above, “except for the mandatory rules of international law” (prohibition of torture, genocide and slavery, in particular).

The initiative also states that the Confederation and the cantons do not contract any obligation under international law that is in conflict with the Swiss Constitution. Otherwise, these obligations must be adapted and treaties renounced, if necessary.

The initiative on self-determination is also intended to prevent the automatic adoption of the EU law or of its “dynamic”. Last week Christoph Blocher launched his campaign against an institutional framework agreement between Switzerland and the EU. According to him, such an agreement would force the country to follow the decisions of the European Court of Justice and put Switzerland under EU guardianship.

The timing of the relaunching the movement against the EU adds to the tight schedule of the implementation of the initiative against mass immigration. No consensual solution has been reached with the EU at the moment. The deadline is February 17, 2017, when Switzerland will have to introduce a unilateral safeguard clause and quotas.

The text must still go before Parliament and the Federal Council. But many critical voices could be already heard.

The association Dialogue European Convention on Human Rights (ECHR), which launched the media campaign “protective factor” to support the Convention, said in a statement that it is not possible. “We can only sign the ECHR completely, or else not sign it at all.”

The parties were quick to denounce the hidden intentions of the UDC, accused of wanting to eliminate the effects of the ECHR for Switzerland. “Without admitting that it would terminate it [the ECHR]. After the Greek military dictatorship, Switzerland is the first European country that would seek a termination of the ECHR,” writes a broad alliance of parties of all stripes.

If Switzerland accepted this initiative, it would send a “very negative signal” to the international community about its commitment to respecting human rights, added the Swiss section of Amnesty International.

Not a “foreign bailiff”

However, the European Court of Human Rights in Strasbourg is in no way a “foreign bailiff” but a tribunal appointed jointly by the Member States. “The last resort for those who defend themselves against violations of their rights in Europe,” argues another association Urgent Appeal, which gathered 50,000 signatures online opposing the text of the UDC.

“What a contradiction: just two weeks ago Switzerland celebrated its founding myth, which is based on a mutual promise. Today, the SVP files its initiative to violate treaties,” lamented Operation Libero, a movement launched by young university professors, from the German-speaking part of Switzerland, people who are mostly liberal and progressive.