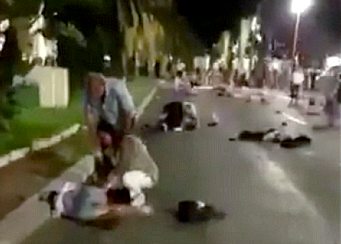 Last month, on the evening of Bastille Day in Nice, a mujahid went on a killing spree with a rented truck, mowing down hundreds of people along the promenade, 85 of whom died. In addition to all the other horrors in the aftermath of the massacre, survivors on the scene were forced to contend with vile people who came to loot and desecrate the bodies of the dead and the dying that were left scattered on the promenade.

Many thanks to Ava Lon for translating excerpts from this article at Fdesouche:

The Prom [la Promenade des Anglais] on the evening of July 14th. Nadia, Daniel and Ludovic, members of the National Union of paratroopers, recount a night in hell. A night of watching the dead and protecting the living.

Nadia and Daniel are 70. Ludovic is handicapped. Two red berets and a wife of a red beret. On the evening of 14 July, they left the Villa Massena, from where they had been watching the fireworks with other members of the Nice branch of the National Union of paratroopers.

And the truck of death passed on the Prom. They were there, red berets, white shirts, badges. They were there. And they stayed. To help. Desperately. Trying to bring to life the last breaths. Holding the hands of those who were slowly dying. Watching over the bodies. Protecting the living. And protecting the dead from scavengers and voyeurs. […]

Here are their stories.

Often at night, she dreams that she stops a crazy truck with her hands. She can’t … she wakes up. And the nightmare continues.

She remembers “the bodies, children, scavengers …”. They “didn’t hesitate”. They remained “to see if they could help save lives.” And they “found only dead, or almost.” Their story. The 14th of July. The fireworks that end. Nadia and Daniel watched from the terrace of the Villa Massena with other members of the Nice branch of the National Union of Paratroopers (UNP). Then they descended to the Promenade. We wanted to listen to some music. But, having arrived at CUM, we had sore feet; we thought we would return. “And the truck passed, the bodies were flying in the air, that was fast.”

Daniel is a former “para”. Nadia, widow of a former “para”. Red Berets, body and soul. “We didn’t think about it; we went to see if we could help,” said Nadia simply. Her hands are shaking. Her eyes are shining a little bit too much. He takes her hand. And his gaze softens.

“There were bodies lying everywhere, says Daniel. In the middle, a woman was still alive. I tried to revive her. A doctor, who lived opposite, was there. He said, ‘Stop, that’s it … She died like all the others, all these children …”

“We gave a blanket to a wounded little kid. He was alive. In the arms of his father,” recalls Nadia. “Occasionally, I came and I stroked his back. It was cold. His father lay down against him to warm him up. He was lying against his son a long time after the little one was dead …” Daniel adds:” It was one of those silences … Dead silence …”

But the worst, exclaims Daniel: “It was not that. All this death, all this pain. It was the scavengers. People walked among the corpses. They lifted the bodies with their feet … They came like flies …”

That devastated him; he struggles to find the words: “This little girl was dead. She only had her doll. A pink doll beside her. A guy came and took the doll, I fought him to retrieve it.” He’s crying.

So, Nadia continues, “I took the little doll and I slipped it under the blanket, all against the girl, for it to stay with her.”

Daniel “fought several times. A guy took a cell phone lying next to a body. I told him: Drop it. There were five of them. They threw my beret on the ground and took the phone. I wasn’t scared, I was enraged.”

Nadia also tried to stop them.

“Sometimes they were three or four … I told them: ‘I was flag bearer, if you hit me, you hit France …” There were also “people who came to see. Sometimes with their children.” […]