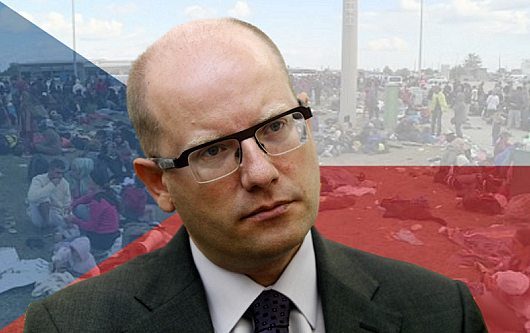 Regular readers are familiar with Miloš Zeman, the president of the Czech Republic. Mr. Zeman has drawn favorable attention from “Islamophobes” all over the globe for his unwavering stance on immigration and Islamization. Like Hungarian Prime Minister Viktor Orbán, he is adamant that Islam is incompatible with Czech culture and values.

Czechia has a parliamentary system of government, however, and the president does not wield any significant political power. His role is largely ceremonial, similar to that of the presidents of Italy and Germany. Important decisions are made by the parliament, under the leadership of the prime minister and his cabinet.

Bohuslav Sobotka is the leader of the Social Democratic Party and the current prime minister of the Czech Republic. On Thursday German Chancellor Angela Merkel paid a visit to Prague. While she was there, Prime Minister Sobotka told the Tin Chancellor that Czechia would not accept any “refugees” under the EU’s mandatory migrant quota system.

Well, that was Thursday. By Friday — yesterday — Bohuslav Sobotka was making arrangements for the care and feeding of an expected 6,000 migrants allocated to the Czech Republic by the European Union.

Xanthippa has been charting Mr. Sobotka’s instantaneous reversal of position. Here’s what she wrote this morning on her blog:

Czech Prime Minister tells Merkel ‘NO’ to migrants and quotas, the next day, his government starts looking for a contractor to look after 6,000 refugees for 3 years

We all know this.

Yet, there is a difference between ‘bending the truth’ and ‘not living up to unrealistic promises’ and a 180 degree reversal in, oh, a day or so.

OK, let me paint the background.

A year ago today, the German government, lead by Chancellor Angela Merkel, sent out a tweet saying (in German):

In other words: come to Germany, the rule of law no longer applies to illegal migrants… All are welcome, all will be let in and given extremely generous handouts.

This tweet was, understandably, the trigger for the tsunami of migrants coming to Germany. All of them claim to be ‘Syrians’ — even though the vast majority of them are not. But, they had destroyed all their documents and, in Germany, innocence/truthfulness is presumed until found guilty/proven fraudulent…which is extremely difficult to do with people with no documentation whatsoever.

Soon, Germany began to be inundated by so many mostly military-age, male, Muslim migrants that its infrastructure began to fail. And the criminality — especially sexual attacks and property damage/theft went through the roof.

Unable to cope with this influx of migrants who do not respect the ‘law of man’ — but only the ‘law of Allah’ = the Shariah, Germany swiftly switched its position as THE ONLY country that invited both refugees from war AND illegal migrants (its laws deny Germany the right to differentiate between true refugees and opportunistic migrants) to the position that all EU nations must take in their ‘fare share’ of migrants who are unwilling to assimilate nor are they willing (or able, education wise) to work.

As if ‘Germany invites them, everybody else must take care of them’ were somehow ‘fair’.

But, there is reasoning behind this madness.

Because this ‘reasoning’ is anything but ‘reasonable’.

To understand it, we must look to the EU and the philosophy that underlines it.

The Third Reich used violence to subjugate other European nations, while the Fourth Reich uses promises of trade deals to subjugate the rest of Europe into vassal states. The means are different, but the result is the same.

Its founders truly believe that the lesson to be learnt from the Third Reich and the Second World War is not that totalitarianism is bad, but that nationalism is. These naive geniuses truly and honestly believe that if they could erase national diversity in Europe, they would effectively prevent all the wars in the whole world. Because European nationalism is the cause of all evil in the world and nothing can stand up against it…

Aside from being extremely egocentric and supremacist of these elites (something they are blind to), it misses the point that the healthy competition between European nation states is what had ushered in the unprecedented age of prosperity we are living in now. And that destroying it would prevent the healthy growth of our civilization instead leading to stagnation and corruption.

Or, perhaps they DO get it — but want to bring our Western European/North American civilization back down to the same lowest denominator as the countries with the lowest level of civilization live under. Which is the stated goal of the United Nations. But, that is a different rant…

Actually, I do believe this second option is the true motivator for the elites’ sabotage of our Euro-American culture: they think they can isolate themselves in luxury and security and want the rest of the world’s cultures to be homogenized, bringing everyone to the lowest common cultural denominator — and thus eliminating ‘inequality’.

Two days ago, the Czech Prime Minister — in a speech — said in no equivocal terms, that he does not want a strong Muslim minority in the Czech Republic.

One day ago, he had repeated the same message to the visiting German Chancellor, Angela Merkel.

Merkel’s visit to Prague was seen as a provocation by many citizens and, indeed, they turned up in huge numbers to show their dissatisfaction with her migrant policies. It was, perhaps, the very first time Frau Merkel had faced such massive demonstrations against her and her policies.

And, it seemed, the politicians were on board with the citizenry — as they should be.

President Zeman told Ms. Merkel, in no uncertain terms, that it is unfair and unacceptable of Germany to invite the migrant tsunami and then to shift the responsibility for looking after the migrants to all EU nations.

Similarly, the Prime Minister of Czechia, Sobotka, delivered speeches on both Wednesday and Thursday, refusing any migrant quotas and stating that he did not want a strong Muslim minority (community) in the Czech Republic.

No sooner had Ms. Merkel left the country than…

…the Czech Ministry of the Interior had put our an RFP for a general contractor to provide housing and integration services for 6,000 migrants for the next 3 years.

While I’ve been writing this post up — with the aim to produce background and then translate the original article fro the Czech Website Parlamentni Listy, the story I wanted to both link to and translate has been disappeared.

Insert the most vile curses of your choice here — PLEASE!!!

Now I cannot document my claim — because I took too long to give the background and archive the link itself.

I am reporting the truth!

I am not lying — the article was published, by Parlamentni Listy, and was available just a few hours ago — but has vanished since.

If I can hunt the link down, I will update. In the meantime, my dear readers, I would like to call on you for help: if you can find any article/news story confirming this, before they get lost into ‘memory holes’, please, help me and post the link in the comments.

If any readers can find a web cache of the article in question, please leave the link here in the comments, or better yet, in the comments at Xanthippa’s place.