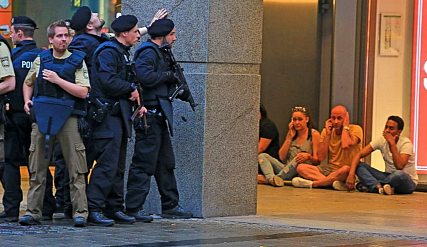 In the following op-ed from Die Welt, Henryk Broder weighs in on the recent reassurances given by politicians and the media that being a victim of a terrorist attack in Germany is really, really unlikely.

These Are the Collateral Damages of Integration

Don’t panic, they tell us. The chances of dying in a traffic accident are much greater. Did anyone say that to the victims of Nazi terror? Or of the Duisburg Loveparade?[1]

Last Monday, less than 24 hours after the explosives attack of Ansbach (fifteen wounded) and the “relationship” action of Reutlingen (one dead), three days after the “rampage” at the Olympia Shopping Center in Munich (nine dead) and six days after the axe and knife attack in a local train near Würzburg (five injured), the general secretary of the CDU Peter Tauber was heard from with an interim appraisal of the refugee crisis.

He tells us that the chancellor’s much-mocked phrase — “We can do that!” — has been “partly realized.” “Those who are coming for us to care for, to give them a roof over their heads, something to eat — we have done that” according to the CDU general secretary in his slightly unfortunate German. Cities, communities, aid organizations and volunteers have accomplished a “logistical masterstroke.” And the “lasting battle against the originating causes of the refugees’ flight” will occupy Germany “for years if not centuries.”

Long-term visions, after all, are commonplace in German politics.

By 2020, a million electric vehicles should be on the road in Germany, says the chancellor, but at the beginning of 2016, there were just 25,500. She also proclaimed the “de-carbonization of the world economy” by the end of the century and the “energy change” is to be compete in Germany by 2050.

It is not surprising for the general secretary of the CDU to dare a glance into the future and declare that “combatting the causes of the refugee crisis” could take decades. No one will hold him or his boss responsible if it turns out in several decades that the prophecy is wrong. It is only surprising that — after a week characterized by news of horrors — he acted as if nothing had happened that contradicts the chancellor’s statement, or at least detracts from its force.

Peter Tauber was not the only contemporary denying reality. There were the usual warnings against a “general suspicion” of refugees and a demand for a strengthening of gun laws. As though an axe, a machete or a rucksack full of explosives were weapons in the sense of the law.

The central question always asked was: Did the perpetrators have a terrorist background? Were they acting on orders from the Islamic State? Or were they “lone wolves” who had — as determined by the president of the federal police — “self-radicalized with lightning swiftness,” as in the time between two pulls on a bong?

Summoned experts and commentators were unanimous. “We” — i.e. the folks out in the country — must not allow ourselves to be demoralized. That is the aim of the perpetrators, whether they are terrorists or just spontaneously running amok. To demoralize us.

Herfried Münkler, professor of political science at Humboldt University, reminds us in an interview with “Theme of the Day” moderator Caren Miosga, that “we live with the most diverse dangers — we become infected, we get hurt by household appliances, and much more” and we don’t panic. Statisticians know “that the such risks are much greater… than the risk of falling victim to a terrorist attack.” His recommendation for an “appropriate reaction” is “stubborn indifference.”

More Likely to Be Killed by a Mushroom Dish Than Terrorism

Thomas Baumann of Middle German Broadcasting — also on “Theme of the Day” — counsels “defiant calm,” while Arno Frank in Die Zeit thinks “heroic composure would do us good.” The comparison to traffic accidents was made repeatedly. Michael Strempel of West German Broadcasting pontificated, “…dealing with this kind of danger which, ultimately, is much less than the likelihood of a fatal car crash.”

Christian Bommarius played the same tune in the Frankfurter Rundschau, only louder: “In spite of the most recent attacks, the risk of being killed in a terrorist attack is — at least in Europe — extremely slight. Experts assure us: less than that of dying from a bad dish of mushrooms. Also, the likelihood of dying in a German traffic accident is considerably greater than of being blown up.”

How can it be that reasonable people, who ooze empathy over an endangered hermit beetle, can make such calculations, which may be technically correct, but bespeak disdain for the victims who had the bad luck to be at the wrong place at the wrong time?

After the disaster at the 2010 Duisburg Loveparade, did anyone tell the friends and families of the 21 dead: “Don’t get so worked up! The possibility of getting killed in a traffic accident is much greater than of being trampled to death at a techno-festival”? Not even the most insensitive thug would have dared to compare the nine victims of the Nationalist Socialist Underground terrorist cell to traffic accident casualties. And if so, would have deserved being shot down in flames.

Sahra Wagenknecht, of All People, Enters the No-Go Zone

The commitment with which the irrelevant details were discussed — was the weapon in Reutlingen a machete or a kebab knife, were the perpetrators on the IS payroll or were they inspired by IS — served a purpose. If at all possible, not to have to talk about how it could go so far that “refugee” could become a synonym for “danger.”

Of all people, it was leftist Sahra Wagenknecht who dared to step into the no-go zone: “The events of recent days show the acceptance and integration of refugees and immigrants is at the least accompanied by considerable problems and is very much more difficult than Mrs. Merkel tried to convince us last Fall with her ‘We can do it!’”

There is a quantitative and a qualitative aspect to the problem. Quantitatively, it may be quite small. Presently, according to Interior Minister de Maizière on Monday, there are 59 investigations of refugees on “suspicion of involvement in terrorist structures. And that is out of many hundreds of thousands of newly arrived people.”

On the same day, Berlin Interior Senator[2] Frank Henkel said that no one should deceive themselves. “We have apparently imported quite a few brutalized persons, who are capable of barbaric crimes, such as have never before been common in this country.” He simultaneously warned against this subject being “manipulated” by rightist populists.

Neither de Maizière nor Henkel mentioned the “bagatelle crimes” under the threshold of terrorism — mass groping, sexual abuses in public pools — which have now become commonplace. This seems to be a question of the collateral damages of integration which have now become so common that they are no longer mentioned.

The price of the policy of open borders will not be paid by the natives, but by the new arrivals. Every warning against “general suspicion” creates exactly the opposite of the desired effect. Every reference to the statistical improbability of becoming the victim of an attack simply confirms the suspicion that the danger is not calculable but nevertheless ubiquitous.

10 thoughts on “Breaking a Few Eggs for the German Omelet”