Magdi Allam is an Egyptian-born convert to Catholicism who now lives in Italy. His most recent appearance here was last month, in a translated essay about Italy’s demographic decline.

The essay below appeared on the author’s blog. Many thanks to Giusy for the translation: 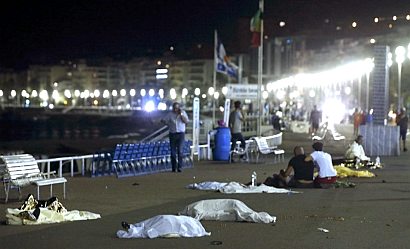 After Nice, will yet more massacres be necessary to make us understand that we must fight Islamic terrorism and that the enemy to be overcome is Islam?

We are at war and it is time to fight. The enemy is Islam and now is the time to outlaw it. Because it is Islam that legitimizes the terrorists who cut throats, behead, slaughter and blow themselves up. Because it is Islam that inspires the brainwashing practiced in mosques and jihadist sites, transforming the faithful of Allah into aspiring “martyrs” who, by means of suicidal-homicidal acts, imagine they will reach heaven with 72 eternal virgins.

“We are at war,” said President Hollande on the evening of November 13, 2015 when Paris was bloodied by atrocious Islamic terrorist massacres, proclaiming a state of emergency, the closure of borders and violent mosques, the repression of Islamic terrorist sympathizers. The reality is that nothing of substance was actually done. Because we are afraid to face the enemy: Islam. We continue to wander naïvely around the subject, or dissemble like cowards arguing that Islam is a religion of peace and love, while the Islamic terrorists are not even Muslims but crazy people who betray the “true Islam.” We continue to underestimate and downplay the scale of the threat because only single or small groups of terrorists are carrying out the atrocities, when this is their real strength, because it makes it more difficult to foresee attacks and suppress the terror network.

It is time to say “enough” to ignorance, do-gooding, cowardice, hypocrisy and to this self-destructive suicidal desire of Europe, which imagines that in order to save itself from throat-cutting terrorists we should entrust ourselves to tongue-cutting ones, those who require us to legitimize Islam irrespective of its contents and to grant them ever more mosques.

It is time to become aware of the specifics of Islam whose two pillars, the Koran and Muhammad, which are identical for all Muslims, legitimize hatred, violence and death towards unbelievers, starting with Jews and Christians, apostates, adulterers and homosexuals. It is time to acknowledge that it is actually the Islamic terrorists who, more than anybody else, comply literally and in full with what Allah prescribed in the Koran and especially to what Muhammad said and did.

It is time to come to grips with a basic reality, which is both elementary and tragically relevant: Islamic terrorism explodes only where there are mosques, “Islamic communities”, de facto territories run according to Sharia law, the Koranic law; where alongside this the state is lacking in terms of defense and security, society is fragile on the level of demography and values, and the economy is inadequate to maintain a decent standard of living for the majority of citizens. Islamic terrorism erupts as the final stage in the process of Islamization in progress, presenting itself as the solution which violently achieves the Islamic ideal, filling the void created by the crisis in institutions and a decadent civilization. Now is the moment to stop facilitating Islamic terrorism by legitimizing Islam, conceding mosques, supporting the “Islamic community”, tolerating the application of Sharia. Islamic terrorism is like the overflowing of a river, where the river is Islam and where the banks which give way are our weaknesses as a state, society and economy.

It is time to recognize and to dissociate ourselves from those Islamic states that, directly or indirectly, support Islamic terrorists under their various names, Isis, Al-Nusra Front, Jaysh al-Islam, Fajr Libya, Ansar al-Sharia, which are mainly Turkey, Saudi Arabia and Qatar. And, incidentally, they are the same Islamic states that support the so-called “moderate Muslims”, primarily the Muslim Brotherhood, chiefly by financing the construction of new mosques in Italy and Europe. In parallel, along with the United Arab Emirates and Kuwait, these states are actively engaged in the financial penetration of Italy and Europe by the acquisition of company shares and high-value real estate, through which they exercise a growing power to influence our economic and political choices.

It is time to rise against Islam to be fully ourselves in our own home. But how many other massacres will we have to suffer and how many other deaths will we weep for after Paris, Brussels, Orlando, Dhaka and Nice before this Europe of ours will have to face up to reality, to acknowledge that we are at war, fighting to defeat the throat-cutting and tongue-cutting Islamic terrorists, to outlaw Islam the same as it has always been for 1400 years?