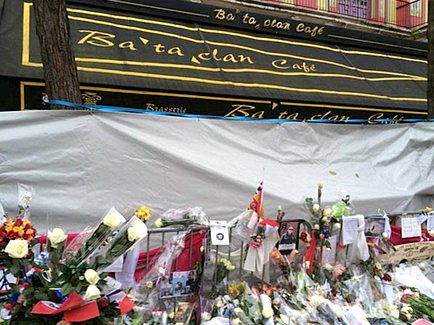 There had been rumors that the Islamic terrorists who committed the massacre at the Bataclan in Paris last November had tortured and mutilated their wounded victims before they were killed. The French government never publicly acknowledged that any such barbarism occurred, but hearings were held in camera last March in which first responders confirmed that some of the alleged atrocities in fact took place.

Many thanks to Ava Lon for translating this report from Fdesouche:

Bataclan: the victims were tortured and mutilated? (Update: parliamentary report)

We then left for the Bataclan.

Mr. O. B. When we were at the corner of the passage Saint-Pierre Amelot, while people in the Bataclan suffered horrific things, we were very lucky. We went back there, and the owner of the tile shop behind which we were sheltered explained that his shop was an old bank whose windows were shielded. This protected us — I had a ballistic shield without additional plates. At the corner, we heard people moaning, but we could not go help them because we did not have the proper equipment.

Justice Georges Fenech. For the information of the Commission of Inquiry, Mr T. P., can you tell us how you learned that there had been acts of barbarism within the Bataclan: beheadings, evisceration, gouging out of eyes …?

Mr. T. P. After the police stormed the building, we were with colleagues at the passage Saint-Pierre Amelot when I saw a weeping investigator who went out to throw up. He told us what he had seen. I did not know this colleague, but he was so shocked that sharing came naturally.

Alain Marsaud. Acts of torture happened on the second floor?

Mr. T. P. I think so, because I entered at the ground floor where there was no such thing, only people hit by bullets.

Alain Marsaud. To your knowledge, they were undoubtedly three? Is there not a chance for a fourth one to have escaped?

Mr. T. P. It is certain that they were at least three, but there were maybe four. The radio was broadcasting calls to the police emergency number, 17: we heard of three or four people.

Alain Marsaud. Is it impossible a fourth person was able to escape by being among the wounded that were evacuated?

Mr. T. P. It’s not impossible. That’s why my colleagues carried out summary pat-downs of all victims, even injured, coming out through the main entrance.

Mr. S. L. We were doing systematic summary pat downs, at least at the plexus, the base of the torso and legs.

Alain Marsaud. A fourth terrorist could have hurt himself or fled among the wounded?

Alain Marsaud. We only found three weapons of war.

Mr. S. L. This is part of the investigation. For our part, we don’t know anything about it.

Justice Georges Fenech. Gentlemen, thank you very much for delivering this very important testimony. The inquiry commission commends your courage and intervention.

Mr. T. P. Commissioner N entered with his driver. Then we could hear him shooting and there was an explosion. Once the targeted individual is neutralized, the first rounds are being directed at us at the side Saint Pierre Amelot. During the ten minutes that the terrorist is shooting at us, we no longer hear any other shots inside.

Justice Georges Fenech. Because the other is dead.

Mr. T. P. One of them was neutralized. The other is upstairs trying to … I tend to think that as long as I’m being shot at, no one else is being killed.

Pierre Lellouche. What do you mean by “trying to …”?

Justice Georges Fenech. I think some things have never been said. I think maybe we could, at this stage, clear things up.

Mr. T. P. Bodies were not presented to families because people were beheaded there, people had their throats cut, people were eviscerated. There are women who were stabbed in the genitals.

Justice Georges Fenech. All this was apparently videotaped for ISIS!

The Rapporteur. These acts were committed by the two survivors. Do you know if you wounded the one you were shooting at in St. Pierre Amelot passage?

Mr. T. P. I think so, but I’m not sure. As they blew themselves up, it’s hard to tell if he was wounded in the torso. I think I hit him, because the shooting stopped, and the door closed. The fact that the Kalashnikov [fire] collapses and the doors close seems significant to me. Later, we talked to the civilian who made us signs in the passage Saint-Pierre Amelot: he told us we had hit the shooter and that’s why he had stopped firing.

After this time, the shots we heard inside were only very sporadic. There were no more rounds fired. In all likelihood, a terrorist or other people were finishing their victims off. Then, I have to confess that I only got fifteen meters [50 feet] inside the Bataclan behind the BIS. My presence was not necessary, so I left. I had seen enough.

Pierre Lellouche. Where were the people being tortured?

Pierre Lellouche. This happened after the person you hurt went upstairs?

Mr. T. P. I think that it even happened before, but this is only my personal opinion. While we were fighting with a terrorist at the emergency door, another one was doing all these despicable things upstairs.

Pierre Lellouche. The video was sent?

Mr. President Georges Fenech. I understand that videos were sent.

Pierre Lellouche. We can find it out if the victims’ cell phones were recovered. Do we have them?

Mr. T. P. They blew themselves up. There were people decapitated, people with their throats slit, people who were gutted. There were pretend sexual acts on women and stabbing at the genitals. If I’m not mistaken, the eyes of some people were gouged out.

Minutes of the hearing in camera of Wednesday, March 23, 2016

The Rapporteur. Did Bataclan terrorists commit beheadings and mutilations? Was the victims’ cause of death other than by shooting or explosion? We are dealing with contradictory information — some of which were provided to us during our hearings — that must be clarified.

Justice Georges Fenech. Indeed, the Committee is troubled by this information which hasn’t leaked anywhere. Thus, the father of one of the victims sent me a copy of a letter he sent to the investigating judge, which I quote in summary:

“On the causes of the death of my son A., I was told, in the forensic institute in Paris, and with making allowances for the shock I was in at that moment, that his testicles were cut off and put in his mouth, and that he was disemboweled. When I saw him behind glass, lying on a table, a white shroud covering him up to the neck, a psychologist was with me. The latter said: ‘The only presentable part of your son is his left profile.’ I noticed that he had no right eye. I mentioned it; I was informed that they had gouged his eye and crushed the right side of his face, where there was a very large hematoma that we could all see during the casketing.”

This particular testimony could corroborate the statements made by one of the BAC officials that one of the investigators vomited immediately on leaving the Bataclan after finding one decapitation and several eviscerations. Are you aware of such facts?

Michel Cadot. I had no knowledge of these facts, neither from the Forensic Institute nor the officials in question. It is obviously up to the court to assess the veracity of the investigation. Nevertheless, I realized that at the site of the attack we found no knife or other sharp device that would allow this type of mutilations. It will be easy to verify as part of the investigation. In my case, once again, I received no message from the Forensic Institute or the direction of guardianship of the relevant BAC that would suggest it was true [NT that there were mutilations].

Christian Sainte. I cannot jump to conclusions at this point, given the state of the investigation, but nothing in the present state of my knowledge allows me to think that what has just been read is true. I specify, for the sake of clarity, some of the bodies found at the Bataclan were extremely mutilated by the explosions and weapons, to the point that it was sometimes difficult to reconstruct the dismembered bodies. In other words, injuries described by this father may also have been caused by automatic weapons, by explosions, or projectiles of nails and bolts.

Justice Georges Fenech. His testicles were apparently put in his mouth …

Christian Sainte. I do not have that information and if these facts had been established, I think I wouldn’t have missed such information.

Minutes of the hearing in camera of Wednesday, March 30, 2016

The judge. Following the November attacks, barbaric acts were reported to the commission.

François Molins. It’s a rumor. Forensic doctors were clear: there was no act of barbarism, no use of knives. According to a witness, the testicles of a person had been cut, but no findings have corroborated it.

Mr. Sébastien Pietrasanta, rapporteur. I commend your work, Mr. Prosecutor. Your voice is heard and respected by all.

REPORT FILED ON BEHALF OF THE BOARD OF INQUIRY created as one of the means used by the State to fight against terrorism since January 7, 2015 / PART 2: REPORTING OF HEARINGS

Rare testimonies posted online mentioned that heads were cut during the hostage-taking in the concert hall. Two weeks after the attacks, the internet users get angry and demand a government response.

Despite calls from the internet users who ask for a communicate about this rumor, the government remained silent.

“My son, who is a policeman, saw a spectacle of blood and severed heads …”

[…] One can then imagine the anxiety of relatives of the policeman. They will learn later that Marc is close to the room of the Bataclan, where the hostages are being kept. He has to monitor a bar. “I watched television until three in the morning,” continues Jeanine. “And then I just got a message from my son.” Mark only returns to his apartment the next morning. He then calls his mother. “It was reassuring to know that he was in his bed. He was tired. He said he was wearing two bulletproof vests and a helmet, and that it was very heavy. And then he told me that it was not pretty sight. His experience was horrible. He saw blood, severed heads … “An ordeal that started for him again last night, since he was back in service.

Testimony of a British survivor: “ISIS men with knives used them to torture their already wounded victims by slitting their stomachs open, when they lay on the ground.”