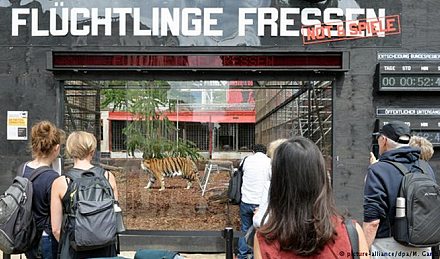 The following story reminds me of how little I understand Germany. I don’t know how anyone could ever take these people seriously. So they want to feed “refugees” to the to some borrowed tigers in order to score political points — why would anyone take their antics seriously? Why would anyone rent out their tigers to such a freak show? Why are the only counter-arguments those of animal rights activists?

Many thanks to Nash Montana for translating this article from the Morgenpost:

Syrian woman wants to be eaten by tiger in Berlin

An enclosure with live tigers has been standing in front of the Gorki Theater in Berlin for a few days. It is an art campaign with the title “Eating Refugees”, and has been very controversial so far.

On Monday a Syrian actress threatened that she will let herself be thrown to the tigers in front of the theater, if politicians don’t show a clear sign of change in their refugee policies in the next eight days.

May Skaf says in a sharp tone: “I will let myself be eaten by Europe.” With tears running down her face she tells of her flight, the war and she calls for an end to the deaths in the Mediterranean Sea. 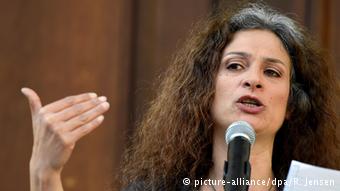 “I have nothing to lose anymore, because I’ve lost everything already.”

And Now Animal Protection Turned up at the Location

The organizers of the Berlin art campaign “Eating Refugees” in front of the Maxim Gorki theater have gotten into trouble with Animal Protection. “The end does not justify the means,” the president of Animal Protection in Berlin, Wolfgang Apel, said Monday.

“Once again freedom-loving wild animals are locked away in a cage, paraded around and misused against their nature.” The artists want to achieve a change in the Residency Act, which forbids the approval of refugees without papers. The “Center for Political Beauty” had the idea for the arena and the tigers.

Allegedly there are already seven refugees that have agreed to be eaten, one female activist says. The demand: The federal government should allow the group to bring 100 Syrians from Turkey into Germany by airplane.

The Berlin Culture Secretary Tim Renner explained that it is the responsibility of the Gorki theater to decide which artistic groups it invites. And: “It isn’t a duty of art to be comfortable.” The Federal Ministry of the Interior described the campaign as “cynical”.

The activists declared at the start of their campaign last week that Animal Protection has to be respected. The tigers therefore come out of private ownership from Saarland. Animal Protection president Apel says that it is important to point out dramatic situations of the refugees and to make people aware of the deficiencies in European refugee politics.

“But not at the expense of innocent animals.”

Note: The eight days came and went, and nobody got eaten. The tigers were not abused, the asylum seekers did not become tiger food, and the immigration policies of the German government remain the same. The whole business generated lots of publicity and media attention but not much else — full of sound and fury, but signifying nothing.

17 thoughts on “Throw the Refugees to the Tigers?”