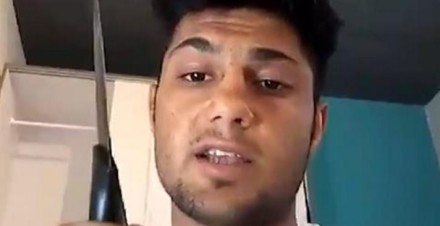 As we reported on Monday, a young culture-enricher ran amok with a knife and an axe on a train in Bavaria, severely wounding several people before being shot dead by police. New details have emerged since then: the youthful miscreant had declared himself a soldier of the Caliphate, pledged allegiance to the Islamic State, and recorded a martyrdom video.

The detailed report below was posted at Politically Incorrect. Many thanks to Nash Montana for translating the article and the videos, and to Vlad Tepes for the subtitling:

The Würzburg attacker lived with a foster family, which is a privilege for “very well-integrated youths”. In a clip from the IS-circulated video he threatened “unbelievers” — and concretely the entirety of Germany. These two sentences from Die Welt are now ringing in a new age. An age in which there is so much lunacy that we are compelled to take it as normal.

There is no security anymore, but we’ll just proceed as usual! The Moroccans had their fun — now the Afghans are coming!

“Generally we have to assume that principally every day in every location and more or less worldwide, such attacks will take place. We are not safe from them. What is certain is that we cannot let these people ruin our lives. We will live our lives as we always have.” (Bavarian Minister of the Interior Joachim Herrmann)

But even before this lunacy became State doctrine in our once safe country, the lying Afghan or Pakistani Muhammad Riyad, alias Riaz Khan Ahmadzai (picture) was our VIP guest. Once Merkel circulated her tantalizing selfies and uttered sentences such as “And now I want to make it very clear, it is not in my power, it is not in the power of any person in Germany, how many come here”, Riyad/Riaz had long arrived as an unaccompanied minor refugee in the custody of the youth protective services of Passau.

This is a PI photoshop, but it’s entirely possible: 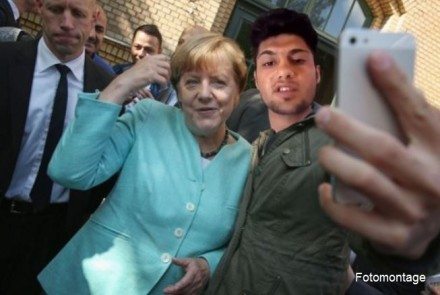 The foster child given to us came to Germany June 30th, 2015. He knew, just like thousands of his companions, that the batty UNO had obliged all EU states to treat unaccompanied minor refugees (Minderjährige, Unbegleitete Flüchtlinge = MUFL) like raw eggs. And with the usual German thoroughness and efficiency the child and youth protective services played along even with bearded children — securing jobs at the Social-Mafia. Completely unashamed, youth caretakers brought foreign mid-twenties refugees to the schools and sold them there as “youths”. And after school, they were presented with yummy food (no cafeteria food), additional German lessons, trauma therapy, free wifi and lots of recreational fun. And when they got tired, they slept in affectionately decorated two-bedroom lodgings instead of in gymnasiums or containers.

The preferred housing and caring cost the German tax payer per MUFL is €5,000 per month. In recent weeks Riyad/Ryaz even enjoyed the status of a foster child in a real family, which costs considerably more. Roughly €60,000 were invested in little Riyad/Ryaz before he totally coolly and with relaxation pulled off his martyr thing.

[Picture of Riyad/Ryaz, quoting his video manifest “And I will slaughter you in your houses and streets.”]

In little slices we learn of the number of the heavily injured victims of the combined axe and knife attack:

Two of the five heavily injured victims of the 17-year-old Afghan refugee Riaz A. are still in critical condition according to the police.

Yesterday talk was of three heavily injured. And there was talk of immediate access of the attacker:

The offender then fled from the train and was found from a SEK (Sondereinsatzkommando) of the police that was coincidentally nearby.

The truth is that the attacker came upon two women who were walking their dogs and he hit one women in the face with his axe twice. The prosecutor’s office:

As he fled along the Mainwiesen he came upon a woman who together with her friend was walking her dog. He yelled something at her from behind, and after the victim turned around to face him, he powerfully stroke her in the face with his axe twice. The victim suffered from life threatening injuries. During the attack — according to a witness — he s supposedly yelled: “I will finish you, you whore!”

With all that one should not forget that with this minor afghan/Pakistani foster child, we are dealing with a sensitive boy who spent his free time with painting and wanted to bake little breads in Germany:

As well as there is a rumor that something was about to change in the residential status of the young man what could have been the trigger for the violence. And there was a hand painted IS flag found in the room of the boy. Riaz seemed neither radicalized nor fanatical. According to information of the Bavarian ministry of social services, he was doing an internship in a bakery, that he stood a chance of a possible apprenticeship.

A butcher would probably have been more fitting. In his pre-recorded IS video, the insignificant foundling brandishes a knife here and there while he tells us of his mission: “I am a soldier of the Islamic state and I am beginning a holy mission in Germany!” The video is authentic. One wouldn’t want to be stuck in the skin of his foster family, who quite possibly also have children of their own.

Just as he promised Allah, Riyad/Riaz then went on his way on that evening towards 8:00pm in order to slaughter unbelievers. A very highly-motivated young man then stepped into the regional train and encountered unsuspecting tourists from Hong Kong:

A. went to the lavatory. Shortly thereafter he left the lavatory, and immediately beat and jabbed with an axe and a knife into the Chinese family. The first panicky emergency calls of other train passengers came in to the police, they told of screams of “allahu akbar” by the offender. Possibly the offender himself then pulled the emergency brake at Würzburg-Heidingsfeld and fled. But because coincidentally there was a SEK [security police] nearby chasing drug dealers, the police were on the scene immediately. They were also attacked by Riaz A., and as a result he was shot dead.

The self-defense killing of the Islamic axe murderer provided the occasion for speculations in green radical circles. Therefore here is the entire sequence of events:

The offender was hiding in the bushes in the twilight. The police tried to find him, and they were therefore walking into the bushes. Suddenly, reports Backert from the accounts of the officers, the suspect attacked the two with an axe. “The suspect attacked the officers with the raised axe in his hand,” Backert says, He was only “three, maybe four arms’ lengths” away from them, when the attacked officers fired their guns. One of the shots then hit the suspect and killed him, and so he was stopped. “As a prosecutor, I am glad that trained SEK officers were involved in this incident,” Backert says. “If a normal police officer had been in this situation, it could have taken an entirely difficult course.”

Just how many arms’ lengths of distance does one have to keep from Merkel’s guests in the future, is something that should fuel further discussions. In other countries as well. The Chinese do not have a sense of humor when it comes to Islam.