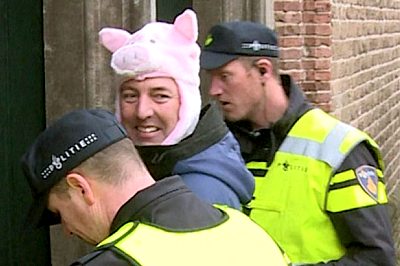 Edwin Wagensveld is the leader of Dutch PEGIDA. The Germans nicknamed him “Dutch Ed” during his many appearances at PEGIDA rallies in Germany. Readers have seen him here previously in videos, including when he was being arrested for wearing a piggie hat at a PEGIDA demo in the Netherlands. More recently, along with Tatjana Festerling, Mr. Wagensveld visited Bulgaria to accompany volunteers who patrol the border with Turkey to catch illegal immigrants.

This last incident made international headlines and caused the German government to open a criminal investigation into Ms. Festerling’s actions. It also drew the ire of PvdA leaders against Edwin Wagensveld. They would like to find away to charge him, and want to keep him from leaving the country again.

The following article from The Post Online was translated by SimonXML. When it appeared earlier at Vlad Tepes, Vlad included this note:

It came to us by way of Tatjana Festerling’s Facebook page which has her comments which I will append below the article. Readers of VladTepesBlog may remember the main subject of this article to be the man arrested in the Netherlands for wearing a hat that looks kinda like a pig at a demonstration in the Netherlands. Here is the video of his arrest last winter for wearing the hat.

Edwin Wagensveld was out with pro-Russian,Bulgarian militia and former Pegida leader Tatjana Festerling.

The Dutch Pegida leader, Edwin Wagensveld, hunts refugees in Bulgaria, revealed the German Frankfurter Allgemeine newspaper at the beginning of this month. The PvdA now wants to know from Interior Minister Ronald Plasterk (PvdA) — replaced at the moment by Stef Blok (VVD) due to heart problems — whether he can impose a ban on Wagensveld.

In the picture with pro-Russian Bulgarian militia

Photos of Wagensveld appeared on Facebook appeared at the end of June with the former Pegida leader, Tatjana Festerling. With them were masked men who, in their own words, were “voluntarily, unarmed and completely legally” helping the Bulgarian border police and tracking down “illegal invaders” on the Bulgarian-Turkish border. According to the German newspaper, the masked men belong to a pro-Russian Bulgarian militia.

The Dutch Labour Party believes that the surveillance of the external borders of the European Union is not a matter for private Dutch individuals. The Social Democrats want to know whether Wagensveld has done anything for which he can be prosecuted,

“Is it criminal to participate in a self-appointed private army?” In addition, the Labour Party wonders whether it is possible “to impose a travel ban on right-wing extremists who supposedly want to get involved in border control”.

Festerling had to step down as leader of Pegida Germany last month after she made statements about the shooting of refugees and picking up pitchforks against the German government. Wagensveld is the leader of Pegida Netherlands and at the beginning of this year gained some notoriety because he was arrested for wearing a hat in the form of a pig’s head.

Now Dutch politicians from the left are completly going crazy: The Dutch Labour Party PvdA is demanding a ban on leaving the country for Edwin Wagensveld by Minister of Internal Affairs. Reason is: he travelled with me to the Bulgarian border in order to inform ourselves about the Bulgarian voluntary border patrols and their work, experiences and impressions directly from the entrance gate for islamic invaders — in terms of political correctness called “refugees” — from Turkey to Europe. After arresting him for wearing a pig-hat, this is the second great comedy-show the Dutch politicians deliver to the world. Or is it the fact that the stream of these holy “refugees” are opium smugglers? This is one FACT that we found on our patrol, a backpack with approximately 500 grams of raw opium. The truth is unwelcome in Europe these days. Western Europe is an open-air psychiatric ward.