The following guest-compendium by Thucydides provides a useful resource for intelligent people who want to undertake a systematic examination of the Koran. It is designed to serve as entry-level material for a study group like the one the author describes in his introduction.

The Koran — What I Learned by Reading It

What did this writer learn by reading the Koran?

The purpose of this compendium is to answer that question and to document what was learned in order to enhance understanding of the Koran.

In the recent past, this writer was a participant in an online Koran Study Group led by a professional philosopher. We met weekly to go over all the chapters, reading and discussing them from beginning to end using the Dawood translation. (Translated with Notes by N. J. Dawood. The Koran [Penguin Classics]. New York: Penguin Group, This 50th anniversary edition published with further revisions, 2006. ISBN 13: 978-0-140-44920-4.).

The cover of the Dawood translation looks as follows: 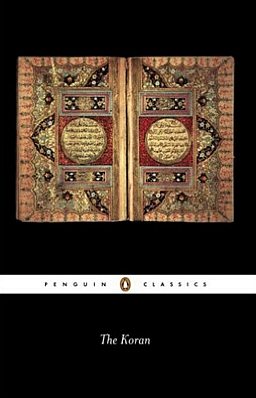 In addition, “Blogging the Qur’an” by Robert Spencer, as supplemental material, was also read, and that helped establish the context in reading the Koran

Note after bringing up the above link: at the end there are links to the Czech, Danish, German and Italian versions.

Feedback received from those who read earlier versions of this compendium as well as conversations with people about topics covered here have raised several issues to discuss as preliminary topics.

To put it another way, hierarchically, underlying these questions is the issue of the nature of Islam, and underlying that issue is what is in the Koran (since the Koran is a foundational document of Islam). Even though my purpose here is to better my own understanding, and even though one comment received was that this can be a summary useful to one starting out to investigate the nature of Islam, how any one individual uses this document is entirely up to him/her, including not doing anything at all with it.

In addition, consider the following very strong statement: “ . . . , since September 11, 2001, every American should own a Koran. Every day you can switch on the television or the radio or open a newspaper and hear or read pronouncements about “what Islam is” and “what the Koran says.” Most of it is wrong — very wrong. You owe it to yourself, your family, and all the Americans killed on 9/11 and since to know the truth. Do not take anyone’s word for it. Find out for yourself by reading the actual Koran…” (Dr. Sebastian Gorka. Defeating Jihad: The Winnable War. Washington, D.C: Regnery Publishing, 2016. pp. 150-151.). With all this said, the scope is not here to answer all these other questions, but to report, factually, on what was learned by reading the Koran.

Second. Another preliminary topic is the order of presentation of the items. Feedback from those who read earlier versions made it clear that a reworking of the original order was warranted. This was done by categorizing the items as discussed below and then grouping the substantive items into a conclusion. There is a lot of material here. However, a number of items below do not focus on the essence of Islam, but are more in the nature of nomenclature and history. The items given below are categorized as non-substantive and substantive. The former can be subdivided into items that pertain to nomenclature and history. The substantive items were thus characterized since they directly bear on the essence of Islam. In order to aid in focusing on the conclusions for the substantive items, I have used the technique of using bolded red text for this purpose. There are only three such substantive items.[1] (Endnotes are at the end.)

Thus, instead of complexity, this approach to categorization makes the material much easier to understand. Essence is measured by correspondence with most fundamental philosophical issues; that is, metaphysical and epistemological issues.[2] What is relevant is the official doctrine that is expounded in a foundational document, and the Koran is such a document. Thus ending up with three substantive items, the question can be then asked: Why stop there? Why not group these into a single integration? This is done at the end as a Conclusion.

Third. Why give examples and why compare translations? Feedback from discussions of issues raised in earlier versions indicated there was gross ignorance about the Koran, and thus there was a need to give some examples of actual quotes and also give a comment about the significance of the quotes. In the media, sometimes a quote is given from the Koran; for example, for Sura 4:16 it would read “If two men among you are guilty of lewdness, punish them both. If they repent and amend, Leave them alone; for Allah is Oft-returning, Most Merciful.” If that is all that one is given, it might not be realized that there are different translations. It might even be assumed that there is only one correct wording. If one checks this Sura in another translation that may be handy, or online, the wording may not be identical. This is a point to be cognizant of: there are different translations, and different translations do not necessarily give the identical wording.

Fourth. Links are provided so that it is known where the information came from and obviates the need to go back at a later time to find the source of the information again. It is suggested that on initial reading following the links be bypassed.

Fifth. What to call this document? This work has been variously called an essay, article, document, research paper, or compendium. One discussant pointed out that “essay” means one’s opinion is included. Indeed, checking one dictionary indicated that this may be the case, but not necessarily so; another dictionary gives “a literary composition on a particular subject” as a definition for “essay”. The use of “essay” is ruled out because of the possibility that this work could be construed as opinion as opposed to the factual reporting that it is. The best characterization is judged to use compendium, a brief summary of essential details of the subject under discussion.

Now, with these preliminary topics out of the way, we turn to the items that were learned from reading the Koran.

First. Man has the faculty of reason. This is so important that as a result man is defined as the rational animal. The question then arises of the status of reason in the Koran and, therefore, in Islam. What is evident is the abdication of reason and instead the use of faith and force are primary. The result is a total absence of reason. In other words, a total negation of reason and of man’s distinctive mode of operating.

Third. Here is another point that this writer learned as a result of reading the Koran, and also connects with the comment immediately above. Do not assume that the meaning or understanding that you have for a word has that same meaning or understanding in Islamic thought. For example, “peace” in Islam does not mean the same that is generally understood by that word: “The Islamic concept of peace, meaning making the whole world Muslim . . . “

This quote appears near the end of this article from Answering Islam.

Fourth. Being in a study group and having a regular schedule is advantageous in that these help to maintain motivation. In addition, the supplemental material by Robert Spencer gives context to the readings in the Koran.

Fifth. In retrospect, it would have been helpful to have had the non-substantive items of a historical or nomenclature nature as here categorized discussed at the beginning of the Koran Study Group sessions, at least their essence, and later to cycle back to discuss them in more detail as appropriate in later sessions.

The essence of Islam: a faith-based ideology that govern all aspects of life requiring absolute submission to Allah with the Koran as the infallible Word of Allah.

9 thoughts on “The Koran — What I Learned by Reading It”