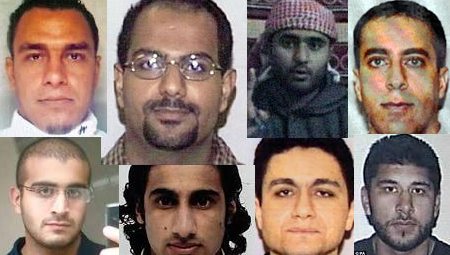 The legacy media have made much of the fact that Mohamed Lahouaiej Bouhlel, the “suddenly radicalized” mujahid who massacred at least 84 people in Nice with a truck, was a “bad Muslim”. He was non-observant — drank alcohol, ate pork, and consorted intimately with infidels of both sexes. Focusing on Mr. Bouhlel’s non-Islamic behavior buttresses the Nothing-To-Do-With-Islam meme, which is crucial to the media’s mission, even more crucial than all the weepy photos of candles and flowers and teddy bears.

The Orlando killer Omar Mateen was also noted to be a “lapsed” Muslim who was fond of an occasional tipple. And then there were the 9-11 hijackers, who engaged the services of prostitutes and lap-dancers during a pub crawl the night before they crashed their plane into the World Trade Center.

To the Western mind, this bad behavior by men who go on to martyr themselves killing kuffar for Allah seems contradictory. But it isn’t, really — it accords with a precise Islamic formula for how one may enter Paradise. It makes complete sense; it’s just totally alien to a Western mind.

Back in 2011 Russkiy wrote an essay about how “bad” Muslims make themselves “good”. It’s worth reproducing here in its entirety.

Shortly after the 9/11 events I became friends with one fellow at the university gym. I didn’t realize at first that he was a Muslim or an Arab. He was from Morocco, as I found out later.

He seemed very normal, always wore Hawaiian T-shirts, was a gym junkie and loved to go clubbing, although he never drank. He was always a sober driver for those of us who were drinking.

Other than his strange behaviour in night clubs (he never drank but seemed the least in control of his behaviour with the opposite sex — he used to whistle and say inappropriate things to women; he was embarrassing for those of us who were drunk) he seemed very normal and friendly until one day when we started discussing some political issues. The conversation revolved around the 9/11 attacks, concerning which he expressed his views as follows: “Osama Bin Laden is a great, brave man, a good Muslim. If all Muslims were like him, the Islamic world wouldn’t be such a s***hole. I wish I was a better Muslim, and brave enough to sacrifice my life in the great Jihad.”

He also said a lot of other things but the above statement summarises his general attitude. From that day onwards I was very suspicious of people who referred to themselves as “bad” Muslims — they were people who generally had a non-observant or not fully observant (Islamic) lifestyle but still referred to themselves as Muslims and defended Islam.

I have recently found out how they could justify their behaviour. Muslims on the day of resurrection are judged according to their good Islamic deeds (hasana) or bad (non-Islamic) deeds. Some Muslims try to keep track of their bad and good deeds. So if they decide to go drinking one night for example, they should go and pray a bit more, read the Quran, or kill lizards (one of the ways to score additional points. If you kill a lizard with one hit you get 100 hasanat; with two hits you get 50, and so on).

So all Muslims can once in a while lapse and do a few non-compliant (Islamically speaking) deeds as long as they compensate for that. The thing about the “bad” Muslims is that they lose track of how many bad deeds they have done. This means that they either have to leave Islam, as there is no longer any hope of salvation for them in Islam, become very, very observant in ways such as growing a beard (a hasana) and other things like that and hope that this will suffice to get them into Paradise, or become a jihadi and hope for a martyr’s death, which will guarantee entrance into Paradise.

So from this logic it can be seen that most bad Muslims would either become an atheist, join some other religion, or become Wahhabi, or even worse, a suicide bomber. Most of them don’t care about politics in Afghanistan or Somalia; they just know that there is a Jihad going on, and therefore a good chance for them to die as a martyr. A good example of this mentality is someone like Ayman al-Zarqawi, or those London bombers, all of whom used to be non-observant until one day something clicked and they suddenly became the most fanatical of all.

People like Osama or any other Muslim who were observant throughout their lives don’t have to become suicide bombers; they can participate in a Jihad, but not as fervently as some of the former “bad” Muslims.