The following essay is a follow-up by Tatjana Festerling to her earlier piece published last Saturday. Many thanks to Rembrandt Clancy for translating it and adding endnotes. 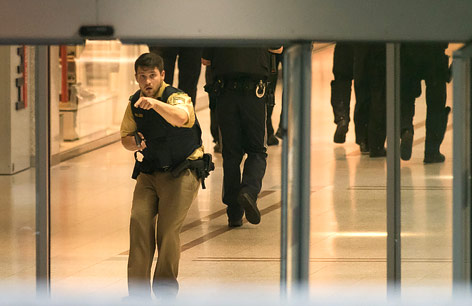 How is it that on the deck of the parking lot, the alleged 18-year-old can be heard speaking for several minutes with a resident; and yet, helicopters, purportedly 16 of them, are circling around in the airspace above the danger zone? How is it that nothing of that can be seen or heard on the film; instead, this dialogue between the “lone perpetrator”, allegedly deranged through psychological depression, and the excavator driver,[1] is of astonishingly good sound quality despite the considerable distance between them? Yet it is filmed with a cell phone — completely without static noise? There are no police vehicle lights whatsoever, no helicopter and no task forces can be seen or heard in the centre of the danger zone; in that case, may we therefore ask: where were the roughly 3,000 tactical police units? Where were the sharpshooters of the SEK and the GSG-9? [2] If this allegedly lone perpetrator was so dangerous, why was he not put out of commission by snipers — there, where he was so completely alone as if on a salver? And why did this alleged “Amokläufer” [person who runs amok] not shoot at the residents? Why instead did he utter the lines which will later supply the alleged motive for the deed — quite insouciantly, as if he had learned them by heart?

In general, one may well ask, how did ONE “youth” with ONE Glock 17 manage to mobilise around 3,000 tactical police? How many will be activated then, when there are TWO persons “running amok” — 6,000? Why did Obama comment as the operation was still ongoing? Is it perhaps because information about an Islamic terrorist attack had long since been received by his secret service? Or did the special forces likewise know about three additional perpetrators for whom they were searching in the main train station, in the subway station and in a getaway car? Is it true that the border between Bavaria and Thuringia was still being checked during the night and that there were kilometres-long traffic jams on the Autobahn?

Then again, where are the long weapons which eyewitnesses had mentioned in the beginning? Why were people running OUT of the shopping centre, when there was shooting OUTSIDE? What characteristic features did the wounds of the seriously and lightly injured persons show? A 9mm Glock delivers a completely different wound profile than a long weapon, although the type of the long weapons has yet to be clarified. Why did the ominous “Loretta” — whom CNN quoted early on in continuous loop even during the attack — expressly emphasise that she herself is a Muslim?

These questions point to research considerations which an Arabic-speaker with experience in terrorism has put together.[3] He says: the Munich massacre is a complete cover-up. The Facebook site of the alleged “lone perpetrator” — whose name he cites in Arabic — gives information about his family or clan background and shows that he is NOT Iranian and therefore also NOT a Shiite, but is a Syrian Islamist who is clearly pro-Turkey. The profile photo shows the image of a youth; in reality, the terrorist or “Amokläufer”, renamed “David” in the German media, is much older and has a record with Interpol. Alarabiya.net confirms this.[4] He supports his research with many links pointing to Facebook profiles of Syrian rebels or their supporters. Most interesting, however, is the author’s highly political thesis at the end, which describes a possible scenario for the future relationships among Germany, Turkey and the EU. Perhaps someone will translate the text into German so as to make it available to more people as a counter-thesis to the official version and hence contribute to clarifying this more than remarkable story of the “Iranian lone perpetrator”.

18 thoughts on “Terror in Munich: Commentary — Believe Nothing, Episode 2”