Long-time readers are familiar with the federal government’s scrubbing of Islam-related language from its training materials on the “War on Terror”. The Department of Homeland Security, and in particular the FBI, have systematically removed all words associated with Islam from their internal documents. As chronicled in Philip Haney’s book See Something — Say Nothing, there were two separate purges of materials after Barack Hussein Obama took office, undertaken at the request of DHS’ Muslim “partners”. Maj. Stephen Coughlin has also written extensively about the success that the Muslim Brotherhood had in persuading the federal government to sanitize all references to Islam from its terrorism-related documents.

This purging of materials is one of the most successful covert influence operations in United States history. Quietly, and without making anyone outside the bowels of the bureaucracy aware of it, Muslim agents sabotaged the ability of the relevant agencies to deal with the threat of Islamic terrorists. Our security agencies are unable to talk about the ideology behind Islamic attacks on the West, unable to analyze it in any meaningful way, and unable to explain it to their own employees or other parts of the government.

It’s a remarkable victory for Islam, when you think about it. And quite discouraging for those of us who have long hoped that our government would eventually wake up and act to roll back the Islamization of the United States. 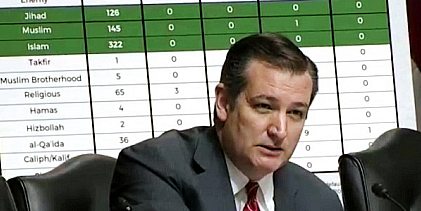 The Counterjihad community has been discussing this sort of thing for a number of years. But now, at last, the issue has been made part of the Congressional Record, thanks to Senator Ted Cruz (R-TX), who held hearings last week into the purging of documents and materials by the Department of Homeland Security.

Below are four videos from last week’s hearings. The first two feature the testimony of Philip Haney, a retired DHS employee and whistleblower, and his interactions with Sen. Cruz.

The third video features Se. Cruz’ questioning of Farhana Khera, the Executive Director of Muslim Advocates, the group that requested the purging of Islam-related words from DHS documents. Watch her adept evasion of all questions directed at her. No matter how they are worded, she is able slip-slide away from any meaningful response:

Finally, here is the limitless and insufferable arrogance of Jeh Johnson, the Secretary of Homeland Security. Not only does he avoid answering all questions, he makes no effort to hide his utter contempt for the questioner and his office:

Many thanks to Vlad Tepes for uploading the first three videos. Hat tip to Matt Bracken for the fourth video.

30 thoughts on “Ted Cruz vs. the Scrubbing of the DHS Lexicon”