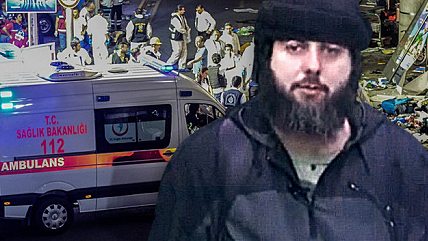 As more information emerges about the Islamic State’s jihad attack on the Ataturk Airport in Istanbul last Tuesday, it appears that the operation was conceived and carried out by Muslim terrorists from the former Soviet Union.

The latest reports indicate that the mastermind of the attack was a Chechen mujahid named Ahmed Tschatajew. Mr. Tschatajew was wanted by the Russian government for his terrorist activities, but Austria refused to extradite him, on the grounds that his human rights might be violated if he returned to Russia. The Austrian government decided to give him asylum, and he lived for a while in Vienna on public assistance.

After leaving Austria he lived in other European countries, all of which refused to extradite him to Russia. He eventually made hijra to the Islamic State in Syria, and the rest is history.

Islamic State Terrorist with asylum status: How he lived in Vienna

The one-armed and one-legged IS terrorist Ahmed Tschatajew is considered one of the possible masterminds of the carnage at Istanbul airport. For eight years, the Chechen held asylum status and lived in a Viennese municipal housing — and was therefore entitled to social assistance, and from September 2010 on to guaranteed minimum income in the amount of €837.76 per month. Those eight years could have cost taxpayers more than €80,000.

No one in the Interior Ministry yet wants to officially confirm the terror connection to Austria: “We are in contact with the Turkish authorities; participation by the suspect Ahmed Tschatajew cannot be ruled out.” But unofficially, from investigators’ circles, there is already more to be known about the Chechen-born IS warlord: “It is quite conceivable that Tschatajew had something to do with the attack in Istanbul. However, it should be kept in mind that there could be political interests in Russia to name a Chechen as a mastermind behind the attack.” As reported, 41 people died in the terrorist drama in Turkey.

Tschatajew deemed “major player in IS”

Well informed sources in the Interior Ministry confirm to the Krone that it is certain that the one-armed and one-legged Chechen is currently not a rose breeder or geriatric nurse in Syria, “This man is a big shot in the Islamic State. It is quite possible that the Chechen is the mastermind of the terrorist attack — as in most of these cases, you never, or only months later receive confirmation. He is in any case a radical Islamist suspected of terrorism, and he therefore lost the right to asylum in Austria.”

No official denial: social assistance for the terrorists

For eight years — from 2003 to 2011 — Ahmed Tschatajew lived undisturbed in public housing in Vienna Mariahilf. And without a job, the Chechen with asylum status was entitled to receive social assistance, which was paid from 1 September 2010 as a minimum security.

A monthly support payment of €837.76 would make €80,424.96 in eight years. However, there is no minimum security file under the name Ahmed Tschatajew at the City of Vienna, city hall insiders say. A Krone informant: “Ahmed Tschatajew could have used a false identity — he even had a false German name, because due to a Chechen feud he was under police protection temporarily.”

Ex-wife: “He had someone else in Syria”

On Friday morning, at a visit to the council flat of the terrorist, the Krone met the ex-wife of the IS leader; the woman with her five children still lives in Vienna. She said: “The divorce is through now, he had someone else in Syria.” The former wife had no idea about his work for the IS, “The last time Ahmed was in Vienna was three years ago.”