The graphic at the top of this post is derived from the logo of the Socialist International. The original image — which can be seen on the left side of my adaptation — is vaguely repellent. A clenched fist holding a rose — what is that supposed to mean?

Is it going to punch me in the face to make me accept the socialist state, and then hand me a flower as a consolation prize? Or is it maybe a kinder, gentler version of the upraised clenched fist, the venerable symbol of World Revolution?

That image was brought to mind by last night’s post of an op-ed by Ahmad Mansour, a secular Muslim in Germany who called on German leftists to stop trying to prevent criticism of Islam. He urged them to engage him in a dialogue about Islam, in hopes that his religion might be reformed.

Since he refused to consider the possibility of dialogue with the supporters of AfD and PEGIDA, it was clear that he spoke to the Left as a man of the Left, in effect demanding an intra-Left conversation. Yet he concluded his essay with these words: “Dare to listen to us and discuss with us!”

I’d be glad to do that. Listening and discussing are what we love to do here at Gates of Vienna. Far from avoiding them, I enjoy conversations with leftists, provided that they remain reasonable and civil. Reasoned discourse is always welcomed. We’ve published guest-posts by Marxists and anarchists in the past.

Unfortunately, it’s rare to find a left-leaning person who is willing to engage in civil discourse with a committed right-winger such as myself. Most discussions with Progressives devolve rapidly into one of the following tropes (or a combination of them):

There are probably other general categories that could be added to the list, but I’ve covered the major ones.

And lefties don’t have a monopoly on this style of argumentation — during my decades of right-wing extremism I’ve witnessed a distressing number of conservatives using the same techniques, only with the polarities reversed.

By and large, however, the willingness to engage in calm, reasoned argument is more often to be found on the Right than the Left. So whenever I encounter a Progressive who’s willing to state his case in a rational fashion and listen to conservative responses, it’s a pleasant surprise. It gives me a chance to actually engage the issues.

For instance, when I talk to American liberals about ObamaCare and similar matters, I ask them to show me any evidence — any concrete examples — that demonstrate the federal government can do a better job of administering health care than private companies. I’ll probably remind them of how much public education has improved (need irony mark here [؟]) since the feds stuck their noses into it. If I’m talking to a calm, reasonable Progressive, at this point he’ll probably mention Canada and the British NHS (although the British example is heard less and less often as the NHS progressively deteriorates).

And so the discussion goes. Neither of us will convince the other of anything, and we’ll end up agreeing to disagree. But I occasionally learn something from the exchange, and I hope my interlocutor walks away from our conversation saying the same thing.

But back to the Socialist International.

Whenever Socialism comes on stage, you get the Fist. It promises to bring you the Rose, but there’s no rose without a fist.

When voters in their naïveté casts their ballots for the Socialists (which they do over and over again, depressingly enough), the first thing that happens is that their taxes go up. It’s a systemic requirement — if a socialist government is to keep its promises to distribute wealth and benefits more equitably, it has to get the money from somewhere. Perhaps it should invade a neighboring country and loot it. Or maybe it can pronounce anathema against a despised subgroup (Jews, say, or kulaks) and expropriate all their assets. Or it can borrow from the banksters, which has lately been the preferred tactic of redistributionist regimes on both sides of the Atlantic.

But eventually it has to raise taxes. There’s no way around it.

The preferred method is the time-honored “Tax the rich!” imperative. However, even if it were tax every rich person (whatever level of “rich” seems fair to the lumpenproletariat) at 100%, that still wouldn’t provide enough money to redistribute to favored groups — whatever money is left over, that is, after all those newly-hired administrators have been paid. And the lower classes have almost nothing that can be extracted, so that leaves the middle classes — you and me — to foot the bill. 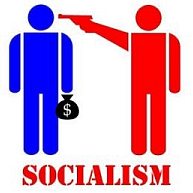 Most middle-class people, even those who vote for the Socialists, would not voluntarily surrender the portion of their wealth necessary to run a socialist system. That’s just too much money — they want to keep more of it. They have reactionary tendencies. They may even be class enemies. Counter-revolutionaries!

That’s where the fist comes in. Or the truncheon. Or the gun. The government is unable to extract the amount it needs without coercion. And the longer the system continues to function, the more coercion is needed. Higher taxes and government meddling inhibit productivity and discourage innovation, so the pool of taxable wealth shrinks. More money is needed! It’s a vicious circle.

So they crack down on any “illicit” economic activity. Monitor every aspect of citizens’ lives, so that whenever two nickels change hands, the state can grab one of them.

An increasing level of coercion is an inherent feature of the system. Without forcing you to give up more and more of your wealth, Socialism will fail.

So what would happen if Progressives were to stick to reasoned discussion and avoid the use of force to achieve their goals? What would happen if they listened to their conservative interlocutors, agreed to disagree, and then walked away from the conversation without doing anything else?

The whole system would fall, that’s what.

And that’s why it will never happen. It’s also why you run into so few Progressives who are willing to use reason to grapple with real issues of political economy. Deep down, subliminally or otherwise, they know that the system they advocate will eventually require the use of naked force.

For the last sixty or seventy years, the Democratic Socialists of the West — those represented in the Socialist International, that is — have relied on unobtrusive persuasion to achieve their ends. Thanks to the wealth of a previously capitalistic society, they have been able to borrow their way to socialist prosperity, and mostly eschew open coercion. They’ve been eating their seed corn.

All that is now eroding. We’re seeing the use naked force a lot more than we used to.

Welcome to the Socialist future — Kiss the nice fist!

22 thoughts on “Kiss the Nice Fist”