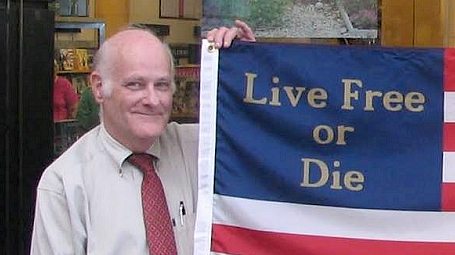 On the road at last!

Somewhere in Flyover Country, Ed Cline is driving down the road, covering the miles between his sudden eviction from his apartment in Williamsburg, Virginia and his new home, one in a much safer place.

Ed is a writer and blogger. He has gotten by these last years on a small pension plus some royalties from his books. Until the FBI showed up at his door one day to tell him his name was on the ISIS Kill List, Ed’s life was a quiet one.

Why ISIS decided to finger him instead of other more prominent Counterjihad writers, only Allah knows. Why the FBI decided to visit him and tell him he was on the list but “not to worry because the danger was nil”, only those agents know. They inform you but offer no suggestions and no help.

Landlords don’t look kindly on ISIS targets living in their apartments; Ed was summarily evicted. Fortunately, a friend of his opened a GoFundMe page and he was able to access those funds while he lived in limbo, trying to find a place. No longer having a home, he was forced to buy — and learn to use — a smart phone. As living expenses mounted at what he called his “dumpy motel”, he also had to pay storage costs for his belongings.

Finding a place that would take him as a tenant proved to be a problem at first, especially given his low annual income and his refusal to use his old landlord’s “recommendations”. However he really lucked out at this point: a Canadian entrepreneur, one who supports Counterjihad work, contacted him and offered to serve as his guarantor for his rent for the coming year. Ed, of course, will pay him back, but that guarantee made the crucial difference in being able to relocate. The new apartment complex accepted his signed-and-faxed lease and all the worried waiting was over. In a day or so he’d given the movers his new address and an arrival date for his belongings. He submitted his forwarding notice to the post office, and closed down the rest of his life in Williamsburg.

Now he’s on the road, headed for his own safe space and taking his time looking at the beautiful summer countryside on the way to his new home.

As the weeks wore on between being evicted and securing a new home, his living expenses mounted. So his friend re-opened the GoFundMe page. Now anyone wishing to help Ed can use that GFM page, or, as you will also see on that same page, a link to his website brings up a shiny new Pay Pal account he agreed to set up for anyone who’d prefer that route. He was originally reluctant to use PayPal — how many tricks is an old dog supposed to learn so quickly? — but fortunately, he talked to someone at PayPal who helped him through the process. I got to make the first donation so he could understand how the process worked. Given how generous our donors have been over the years, it felt like the right thing to do. And it assured Ed that it was safe, which it is for donations. (I have heard of problems with merchandise, but again have experienced no problems in that regard, either.) Finally, for those who wish to send cash or a check to his P.O. box, the post office in Williamsburg will forward everything to his new address.

Once he arrives at his new home, I’m hoping he’ll pay for a security assessment, buy a weapon, and join a shooting club. They’re actually fun, and Ed is already familiar with weapons from his time in the service when he was an M.P.

So Ed is safely outta the ’Burg and now I’m still wondering why the FBI chose him out of all the people on that KILL list they could have warned instead? Was it because Colonial Williamsburg is a pleasant day trip from their field office and they planned a tourists’ afternoon after they finished ruining Ed’s life?

Ed is mad at the apartment complex manager, but I’m madder still about the callous disregard the FBI exhibited toward Ed’s situation. They can’t/won’t offer any help and what do they care if an old man is left homeless as a result of their visit? Why on God’s green earth did they choose Ed Cline?

Surely the cross-dressing J. Edgar Hoover is rolling over in his dress in that monument of his: how much his agency has fallen! I realize that being confined to our Pg-13 lexicon will limit y’all when it comes to applying the normal Anglo-Saxon terminology we reserve for organizations we don’t like much. But just get out the online thesaurus and have some fun. For example, Feckless fits right well into the first slot of that acronym. So does Faithless. If you want to jump start your brain, try looking on some of the sites that list Scrabble words by alphabet and length of word. How about Fatuous? And moving on to ‘B’ I have, so far, Fatuous Bleaters, Inc. But I’m very tired — the waiting for Ed to be outta there was a bit wearing — no doubt y’all will be far more creative.

***UPDATE*** Now that I have the link here from Western Rifle Shooters for their mention of Ed’s new status as no-longer-homeless, you can click on it and let your imagination run free over there; spout just about anything you’re moved to say. They don’t have to answer to home-schooling parents about language usage: it is indeed a manly space at WRSA.

A very Happy Fourth of July, everyone! And our gratitude for your generosity to Ed. This is one case where ISIS not only didn’t kill him, but with the help of the F.B. & I. they turned his life upside down and shook an even better one into being.

There’s a moral in there somewhere. As soon as Ed recovers his equilibrium I’m sure he’ll think of it.

And there’s definitely a motto to live by: Illegitimi non carborundum, my fellow Americans. If the Feckless Brigade of Illegitimi — those FBI day-trippers — come by here we’ll let you know. I doubt it will ever happen though: nothing but timber and old cars out here. We’re not worried: it’s forty miles to a latte from where we are.