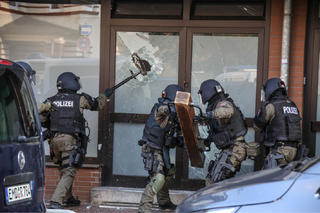 After all the jihad slaughter, we’ve been wondering when some German mosques would get peeled open and their doings exposed for public view. I’ve been RILLY pondering this question ever since the eighteen year-old jihadi was found to have employed a Glock in his carnage. Not to mention the three hundred rounds of ammunition he was carrying. Obviously the boy didn’t go to his local department store for the materiel.

Now comes my answer in the form of this story from The Daily Mail:

Armed police officers have launched a raid on a mosque and several homes belonging to a group believed to be radicalising Muslims in Germany.

Apartments belonging to eight board members of the radical German-speaking Islamic group DIK were searched by officers in Hildesheim, Lower Saxony.

It comes as part of a crackdown on the group, which is thought to have been encouraging people to travel to Syria and Iraq to join ISIS.

The group ran sermons, seminars and lectures entitled ‘the hatred of infidels’, according to German media.

’Bout time, eh? And most satisfying.

Just to show you that the B never ever gets punch-drunk from the unceasing bad news, here’s a small snip from a conversation he had earlier today. It was his response to a team member about that Hildesheim story, after she said, “It seems 22 guys from Hildesheim went to Syria.” It reminded him of the first line of a limerick, so —

22 guys went to Syria
To wage jihad in the interior.
They got blown away
On the very first day
And made all the infidels cheerier.

Having been asking repeatedly when we’d hear about German police action against these mosques Islamic barracks, it certainly cheered me to get a definitive answer.

I don’t think we’ve had any similar police action in this country. We could use some.